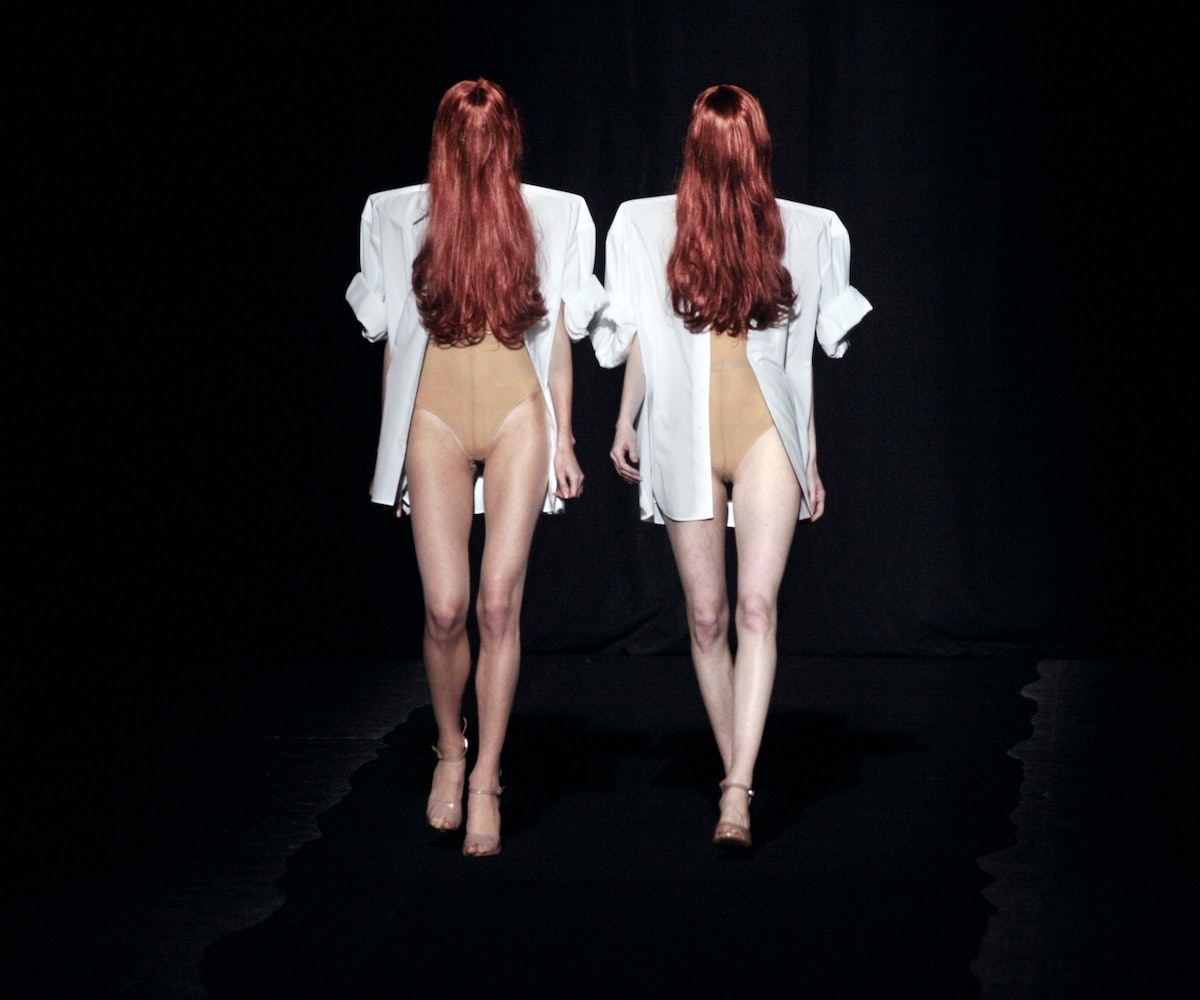 Celebrity status has become a valued currency among today's designers. Connections with press, a loyal social media, and a distinct brand persona are necessities when vying for success. Martin Margiela managed to circumvent all of these during his ascent as a designer. His success grew throughout the '80s up until his house's last show in 2008, all while maintaining his elusive persona. Margiela avoided interviews, rarely took photos, and even opted out of taking a brief bow during his show's finales.

More than 10 years after his final show, Margiela is stepping out of character for Martin Margiela: In His Own Words, which is available for digital rental through select cinemas on August 14. The designer offered director Reiner Holzemer extraordinary access for the film, granting intimate interviews to discuss his life and work over the course of 42 days in Paris while he prepared for his retrospective at the Palais Galliera in 2018.

The documentary also includes interviews with some of Margiela's friends, mentors, and admirers, including Jean Paul Gaultier, Cathy Horyn, and Carine Roitfeld, whom Margiela hired to walk in one of his shows after he spotted her at his showroom with a friend.

NYLON spoke with Holzemer about working with Margiela, and the complicated path it took to create a film about the notoriously evasive designer.

Why did you decide to do a film on Margiela?

I have the feeling that the world and the philosophy of Martin fits the time we live in right now perfectly because he always was an avant-garde person, he was thinking about how to make things different, how to use the wonderful secondhand fabrics that were thrown away very often, and he reused them and made new garments out of them. He was looking for other ways to present his work; the shows that he designed were so different from the rest [during] that period — the late '80s and early '90s and the beginning of the turn of the century.

But that all was not in my mind when I started, that's a lucky coincidence. I saw an exhibition in Antwerp by coincidence because I had a screening of the Dries [van Noten] movie in Antwerp, and on the same day there was an opening of a fashion exhibition about the work that Martin did for Hermès where he worked for six years as the ready-to-wear designer. And I saw those clothes and I was immediately fascinated because they were so simple, so pure, so beautiful, and on the other hand, there were other garments that were totally different from the Hermès garments, and those were the designs he did for his own house, Maison Martin Margiela. It was irritating and fascinating at the same time. I was thinking, 'This is incredible. The same designer can work in those two different directions.'

How were you able to get access to him?

I got through people I knew who worked with him, who were in touch with him. Very important was Olivier Saillard, he's a fashion historian and curator, and I knew that he was preparing an exhibition at the Palais Galliera with Martin. I wrote to Olivier asking if he would put me in touch with Martin. I think after the first mail I sent, two months passed, no reaction came. I sent another one asking, 'Did you pass my mail to Martin?' He said, 'Yes, I passed it, but there was no answer.' Suddenly, after three or four months there came an answer, and he said, 'If you want to meet, I'm preparing that exhibition in Paris, so you can come and we can talk if you're still interested in making a movie.'

Then we finally met, I think it was in January 2018. We sat there in the museum in a meeting room. I told him I would love to make a documentary about him, his life, his biography, his career, but he said, 'I'm not so much interested in that. Movie-making is a lot of work. I maybe want to make a movie myself one day about my life.' He told me later that it was a unique chance to have all those outfits of his career together in the museum, and that it would be nice to have someone shoot it and make a documentary about the exhibition. I said an exhibition movie is 60, 90 minutes. I think it would be boring in the end. In my heart I was hoping to get more. I thought once I'm in touch with him and he sees who I am, how I work, how discrete I am, how intimate I can work, I can do the camera, I can do the sound, if necessary, and that was finally how it worked in the end. I had to win his trust, his confidence.

How did you maintain his trust while filming the documentary?

We started shooting five days after we met for the first time. Then gradually, he learned to trust me. I was very patient with him. I was very quiet, very discrete. I didn't ask questions in the first two or three days. I just followed and observed what he was doing. I think he liked that. He told me later on that he felt quite respected from myself. He often had negative experiences in the beginning, in the early days of his career with press. I was curious because you could not find much information about him and his work in books and on the internet before, so it was really exciting to get the information directly from him.

What were his thoughts when he saw the finished film?

It was a big risk for him, by talking and by showing things in a movie. But especially the talking was a big risk for him because in his career, he always refused to explain what he was doing. He hardly gave any words to the press. His philosophy is: Look at my work, and then you'll understand that is what I have to say.

We shot 42 days together in his studio in Paris and at the museum. Then I went back to Munich where I live for editing the whole thing, and he was very nervous because he didn't know what I was doing. It made him a little bit anxious I think because all designers are perfectionists, they are control freaks, they want to have control over the whole process. But as a filmmaker, you have to get a distance from your protagonist and the subject matter to develop your own view and story that you want to tell.

I invited him to my editing room to see the first rough cut. He came and then he watched it for two hours, and after it was over he hugged me and he was very emotional. He's normally not a person who shows many emotions. Then he said, 'OK, it's nice, it's brilliant, it's wonderful what you did, but now I would love to watch it a second time and stop each time I want to stop, and then I'll make notes about things I might not like.' Then he made a list of 120 or 130 details that he thought we should talk about or change. I didn't change it all. I only changed the things that convinced me. And that's how you work with Martin.

What kind of notes did he give?

All different kinds. Sometimes very tiny little things. There was an image and he said, 'This woman was so nasty in the basement of Galleria. I would not like to see her in the movie.' I won't tell you which woman it was because she is still in the movie. I loved the image very much. It's even in trailers or teasers sometimes for the movie. So I thought he had to live with it because I loved the image.

How were you able to get some of the big names to be in the film?

The funny thing was when we called them and emailed them we said we're making a movie with Martin Margiela, we would love to do an interview with you. Then people wrote back, 'No no no. You mean you're doing a movie about Magiela, not with Margiela.' They couldn't believe it.

What do you want people, particularly those in the fashion industry, to take away from this film?

I wanted to fill in the gap in the history of fashion. I had a Q&A with a writer for The New York Times and she said she tried so many times to get an interview with Martin, but they never did. They never spoke to the person. The work was so strong and they were so curious about it. I wanted to fill that gap to give the people to listen to Martin's own words, his story in his own words.

The other thing that I wanted to communicate, not only to the fashion world, but to the world in general, that this is not only a story about a fashion designer. It's about a person who followed a dream that he created as a seven-year-old boy. He followed that dream without compromise, and once he found out that he would have to compromise too much to do his work, he left. It's a movie about a fragile person, a shy person, but also a very strong decision-maker. That's the thing I want to communicate. Go your own way and do the things, especially when you are young, that you want to do. The beginning is the most exciting part of it.