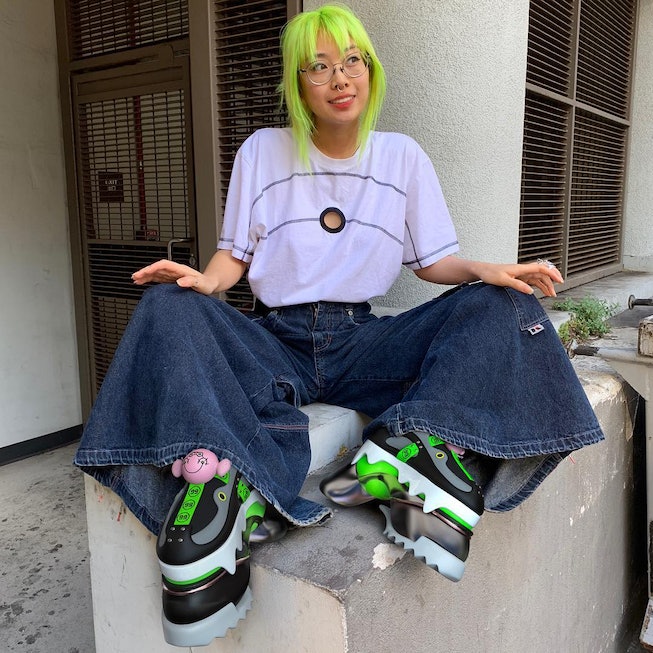 "I wear many hats," says creative Nathalie Nguyen, who models and runs the digital streetwear and sneaker label Happy99 with her partner Dominic Lopez, whom she met through a mutual friend in San Francisco several years ago. At the time, Nguyen was mostly doing illustration work, while he was making video games and music. After they started dating, the duo decided to put shared energy toward a creative project, eventually landing on shoe design.

"Our passion as artists is more in the design realm; what threw us off was the manufacturing," Nguyen says regarding the process of taking a shoe design to market. "It's horrible for the environment. We learned everything about the shoe-making process, the investment process, what it would take, how many VCs, or what the corporate structure was going to have to follow." Upon realizing how laborious and expensive it would be to produce shoes, they decided to put the idea on hold.

Meanwhile, Nguyen moved to New York and started working in 3D design. She had taken some related classes back in college but needed to brush up on her skills, so she spent her free time learning everything she could. She started experimenting with applying alien-like digital makeup to her face using rendering software, ultimately encouraging Lopez to learn the medium, too, so they could make shoes together using 3D design.

In November 2018, they launched Happy99 with a pair of platform, slip-on sneakers that are black and gray, with silver metallic and neon green details. After that, they created a pair of silver and pink, translucent heels with a spring under the bed of the foot. Their designs, which blended hyperreal silhouettes with wheels and metal-looking frames, were modeled by their friends by Photoshopping the futuristic creations on their feet.

When a stylist reached out asking them to borrow a pair of shoes for a photoshoot, they soon realized people thought the footwear was actually real. Some of their followers even got angry when they found out they couldn't buy the creations. It bewildered Nguyen how accustomed people were to needing to have something in their hands in order to consume it. "I think people fail to realize how much effort goes into making a product," she says, adding that fast fashion and Instagram could be at fault.

It's no wonder that Happy99 gained traction quickly. "We were growing so fast, but we were like, 'Do we want that kind of growth? Or do we want to push the barrier or the boundaries on what can be done?'" recalls Nguyen. "That's when we were like, 'Let's make a 3D fashion show. Let's just try it. Let's push ourselves.'"

When it came to creating a runway show, both Nguyen and Lopez, wanted to challenge the typical hypersexualization of 3D female models. "We would watch these things and be like, 'What the hell?'" recalls Nguyen. What they saw was the reverse of where the fashion industry is trying to go right now; they wanted to be more inclusive. So they decided to do it differently by casting real people, like their friends with large social media followings, and picking an actual location in New York's Chinatown, which brought the virtual concept into the present. The 3D-rendered result was an exciting alternative to the typical IRL runway show, giving us the fun familiarity of watching a video game while proving how far you can push the traditional expectations of showcasing a fashion collection.

Outside of Happy99, the digital and 3D fashion space is growing rapidly. Following the advent of CGI influencers, like Lil Miquela, Bermuda, Shudu, and Imma, a handful of brands are starting to make virtual clothes, some of which are sold and rendered on images of real customers and digital avatars.

Other companies doing this include Price On Request, a clothing brand based in Croatia that started selling "upcycled" digital clothing in response to the coronavirus pandemic; German digital fashion house The Fabricant; Janis Sne, a 3D designer who renders virtual clothing and is also a sportswear designer for Adidas; and digital clothing brand Carlings. In May, Hanifa even had a live 3D fashion show that garnered attention across the industry, while big name brands like Marc Jacobs and Sandy Liang are already tapping into Nintendo's Animal Crossing. Previously, Browns Fashion partnered with Happy99 on creating a digital campaign for the retailer's collaboration with footwear designer Christian Stone.

"This is just an open world. Everybody's rushing to colonize their piece of it," Nguyen tells NYLON. "I'm very fortunate to be relatively confident that people differentiate us from other brands, which is hard to achieve in the streetwear community." There's an intentionality to the way Happy99 is run; Nguyen and Lopez don't rush their process. Instead, they take their time to develop ideas, refusing to cater to the fast-paced nature of the industry.

Though Happy99 does make and sell real clothes, including branded sweatshirts and socks, which helps them sustain their practice, the focus of their work remains on developing 3D concepts. Currently, they're exploring new technology like blockchain, which digitally tracks transactions and is increasingly being used within fashion supply chains.

While Nguyen sees a future where we can buy digital-only items, she says we're not there yet because everybody still wants physical things, including herself. "I still like to buy a dress that I can put on my body. Despite being a person that can make digital clothes, I have no real interest in digital clothes [for myself]," she says. "What can I do with it? Absolutely nothing, you know? And it's a harsh reality, but people are going into the digital realm right now."

She also says that Gen Z is closest to commodifying digital clothes through platforms like Fortnite, where gamers can buy digital clothing (or "skins") for their characters. "I don't think it's going to happen with millennials. I think it's Gen Z, quite frankly, because we don't have the platforms to show off our baseball cards, so to speak."

Nguyen believes that part of the reason we buy clothes is to show them off to other people, which is something she doesn't see getting old anytime soon. "We're pleasure-based creatures who want to look good," she explains. Still, there's massive growth in digital fashion, and Happy99 is leading the way with its virtual cyberpunk footwear.