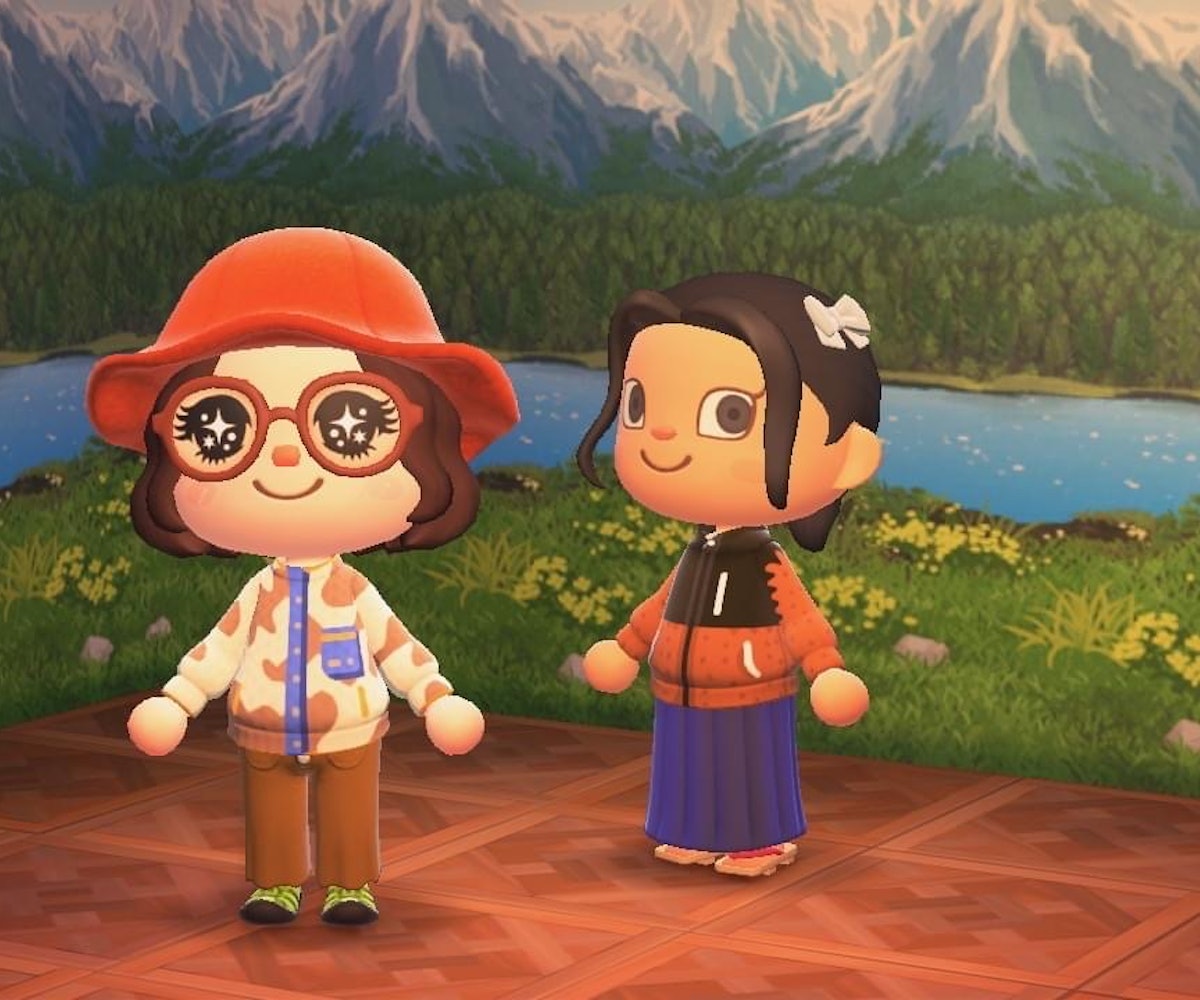 People have been turning to Animal Crossing: New Horizons in droves since having to stay home to prevent the spread of the novel coronavirus. Both the game and the Nintendo Switch have been in high demand over the past month, often being sold out, well, everywhere. For those fortunate enough to have snagged the game and a Switch pre-pandemic, Animal Crossing has been a soothing escape from reality, particularly for the fashion world.

Instagram accounts with custom outfits have cropped up, giving users the opportunity to show off their best virtual style while staying indoors. Brands and retailers have also gotten in on the Animal Crossing fashion craze, too, offering QR codes for IRL looks so gamers can wear them on their own virtual islands.

Fashion designer and Animal Crossing fan Sandy Liang has taken it the extra step recently, partnering with Paige Rubin, What Goes Around Comes Around's Director of Luxury Buying, to recreate her designs for the game while also bringing awareness for Give Directly, a nonprofit that helps families living in poverty. The two hosted a pop-up on Animal Crossing over the weekend, which posed some unexpected challenges. But overall, the in-game event was a big success, and perhaps the start of many more island parties to come.

Liang and Rubin spoke to NYLON over email about their virtual creative process, the crossover between the popular game and fashion, and where they hope to take Sandy Liang x Animal Crossing in the future.

What made you want to take your designs to Animal Crossing?

Sandy Liang: I thought it would be fun! I had been seeing that a lot of people had started to make Animal Crossing versions of designer apparel.

Paige Rubin: We both had noticed people getting creative with custom fashion on Animal Crossing, and a couple of people on Instagram had made Sandy's fleeces. I was bored at home one Sunday and decided to surprise Sandy with a full room of her fleeces I had made for AC. I didn't think about sharing them or hosting an event at that time, I just wanted to make her smile because I know this is a weird time. The idea for the pop-up came naturally after that.

How did you pick which designs to feature and what was it like digitizing them for AC? Any challenges or favorite pieces?

PR: I asked Sandy to send me her favorite pieces that she wanted to feature and that I'd let her know which ones were doable. She sent me like 20 pieces, some from the new collection and some from past seasons. I think I only ended up not doing one of them, and only because I found I don't like replicating fur collars — it's too difficult to get the shape right! I ended up adding in a few she hadn't asked for, too, based on my kind of outsider's perspective on what are the most iconic or well-known Sandy Liang items, like the Snuggles fleece, the Lil Tour sweater, the Picasso fruit-print dress, and the Spongebob top.

My favorite one is the Powers top in the Sky Lily print, because I thought it would be difficult and take a long time, but it ended up being simple and looking really cute. My least favorite is the same top in the Impatient print, because I don't think it ended up looking that much like the real thing. The camo Rory fleece took a crazy long time, but was fun and satisfying to do.

For those unfamiliar with AC, walk us through the process of creating and hosting a pop-up and how were players able to join?

PR: Step one was to make the designs, which I did over the course of three days or so. We took the designs and shot a screenshot "lookbook" with them, on both my island & Sandy's. It was really funny because, since AC has sunrise and sunset, we had to be mindful of good light just like on a real shoot. We FaceTimed while we took the screenshots, and kept yelling, "Got the shot! Models to the next location!" while running around the island. It was fun to do, even though it took an absurdly long time.

Next step was for Sandy to decorate her island and fence off a little space, so I sent her over some cute things she could display along with her own. Sandy posted a Dodo code on her story, which is a code that helps people find her island, even if they aren't "friends" in the game, and lots of people stopped by!

What was the turnout like? Were there any memorable moments?

PR: Animal Crossing only allows eight people on an island at any given time, so it was challenging getting people in and out the way we would have liked to. At one point, we started a queue through a website that allows people to wait in line to get to a given island. We had almost 100 people in line at one point.

Most memorable for me was seeing everyone getting off the plane, lots of them wearing our designs but lots of them wearing Sandy pieces they had made for themselves. It was really cute to see how everyone, wearing Sandy or not, was all dressed up like it was Animal Crossing Fashion eek. (Wait... should we do Animal Crossing Fashion Week? Sandy's gonna say no...)

SL: In addition to Paige's answer, the most memorable moments for me were seeing what people wore to the island. Some people had made their own versions of some other designs (Checkers fleece, Coco dress) and were writing cute little messages on the chatting app. It made my heart warm to play with everyone, even if we were interrupted every other minute because someone was either leaving or entering the island. There were stressful moments for me, especially when I felt bad that visitors couldn't actually do much on my island because of other people coming and going, which automatically saves the game and pauses it for a bit.

Do you have more plans for Sandy Liang x Animal Crossing pop-ups?

PR: I'm down to make more if Sandy is! I think some Sandy creations available only in AC and not in the real world would be amazing. But I'm running out of custom design slots! Someone please tell Nintendo to add more than 50.

SL: Down to have more island parties!

Why do you think so many people are obsessed with the crossover between Animal Crossing and fashion right now?

PR: I think Animal Crossing is bigger than ever because of quarantine, but I think the fashion element would have been a big part of it regardless. It just makes sense; you are given this blank slate of a character and are able to create your fantasy wardrobe for them. I think for a lot of people who like making the designs or downloading them, part of the fun is getting that dream wardrobe beyond what you're able to have in real life.

SL: Because it's the only way to dress up! Also, because you can create yourself anything you want — everyone is a designer.

Business of Fashion recently wrote a piece about whether or not brands can "cash in" on Animal Crossing, are there any takeaways from the game and your pop-up that the industry could apply in the future?

PR: We learned from the pop-up that the game is not exactly optimized for large-scale events or gatherings, and there is no information available on who or how many people downloaded designs, so there are some roadblocks in place for brands who want to get involved. This could be something for Nintendo to adapt to if they are interested in enabling this movement. In my mind, it's more effective as a brand awareness or experiential move. Thinking about "cashing in" in a literal way is hard for me. I love how generous everyone in the game is — there's a lot of sharing and gift giving. Charging people to download the designs would not have felt right.

Sandy, are you currently planning a Spring 2021 collection in quarantine? Is it something you're even thinking about?

SL: Sketching! Taking my time with it all. For the first time in a while I don't feel like I am playing catch-up, which is nice. It makes me feel like I understand myself better. I really can see what I like and what is not important. It's a necessary time to chill out and work less.

What do you think this global pandemic is doing to the fashion industry? Do you ever see the fashion calendar going back to normal?

SL: It's obviously too soon to say, but I do hope the industry shifts in a positive way. I think having more time to design and produce is always a good thing.