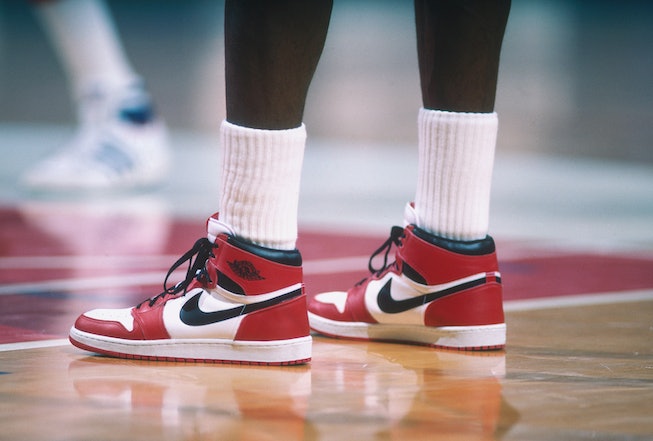 Focus On Sport/Focus on Sport/Getty Images

A pair of Michael Jordan's sneakers from 1985 have sold for a record price during a Sotheby's auction that closed on Sunday. The Nike Air Jordan 1 sneakers, which were signed by Jordan in permanent marker, sold for $560,000, which is $100,000 more than the previous record holder, a pair of 1972 the Nike Waffle Racing Flat "Moon Shoe."

The big sale is in part thanks to the success of Jordan's ESPN documentary series The Last Dance. Sotheby's joined collector and consignor Jordan Geller, founder of sneaker museum Shoezeum, for the online auction, which coincided with the last episode of the series on May 17.

"We are extremely excited about today's record-breaking result," Sotheby's Director of E-Commerce Development Brahm Wachter told WWD. "We saw tremendous bidding up until the moment the sale closed, with the value more than doubling in the final hour alone. That coupled with strong international bidding from six countries on four continents shows not only the incredible appeal of Michael Jordan as one of the most recognizable and legendary athletes of all time, but also that sneaker collecting is truly a global and growing market."

The age of bidders ranged from 19 to over 50 years old across four continents, with 70% of bidders being new to Sotheby's. The final sale of $560,000 greatly exceeded Sotheby's original sale estimate of $150,000. So if you have an old pair of Jordans laying around, maybe hang on to them.