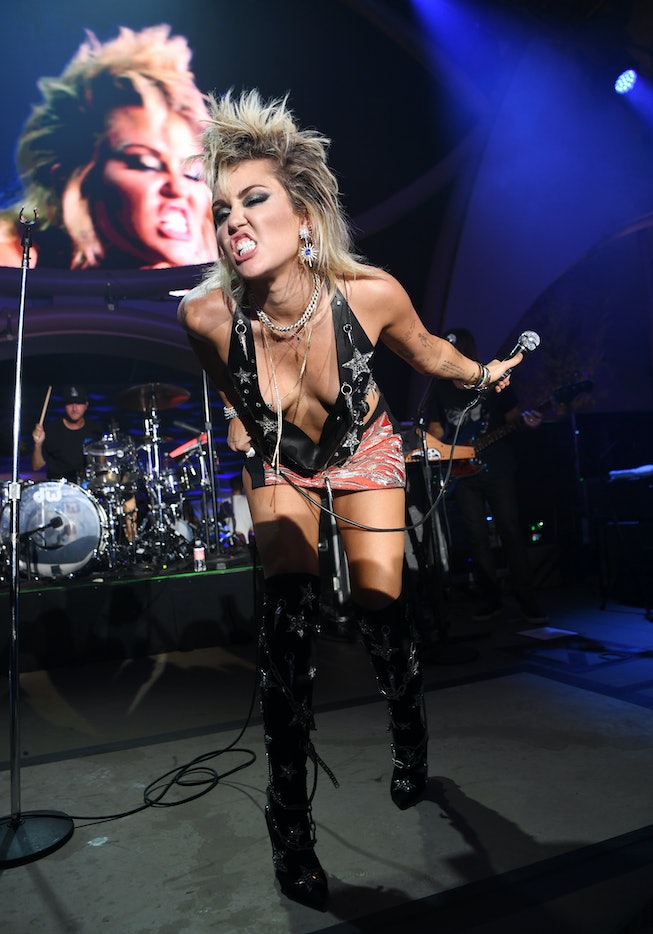 Miley Cyrus has new merch on the way and she’s giving her followers a first look at the goods on Instagram. Her recent fit pic and video feature the latest (and upcoming) drops, and let’s just say they channel the singer’s uncensored approach to all things music and fashion.

On Tuesday, Cyrus posted photos of her new muscle tee, which she wore oversized as a dress and paired with Gucci heels and a low-waist belt. The bright pink top takes inspiration from the pop star’s current rock ‘n’ roll and pop-punk-adjacent era with scribbled text that says “Miley Made Me Realize I Am Gay!” and “I ♥ dick.” There are also a few penises drawn on the shirt for good measure.

“IDK what @billyraycyrus is gonna be more pissed about! Me making a shirt that says ‘I ❤️ Dick’ or crawling all over his truck in my @gucci heels!” wrote Cyrus on Instagram, which shows her on top of her dad’s Nissan — the only and best way to ever show off a fit.

On Wednesday, Cyrus revealed more merch: a pair of sweatpants emblazoned with “F*ck Miley Cyrus.” She tucked them into white cowboy boots, added a black studded belt, and a crop top for the full look.

“STRUTTIN MY STUFF in that NEW unreleased MiLeY MeRcH! Cummmmming soooooon! 💘,” wrote Cyrus, who was singing “SMS,” a collaboration with Britney Spears from her 2013 album Bangerz, in the Instagram video.

Cyrus is set to hit the music festival circuit later this fall, with upcoming performances at Lollapalooza and Austin City Limits. Her recent posts on social media have shown some behind-the-scene videos of her in a rehearsal space, so we could be getting a few sneak peeks into her festival set. If you have plans to catch Cyrus live in concert, you’ll now have the merch to wear, too.