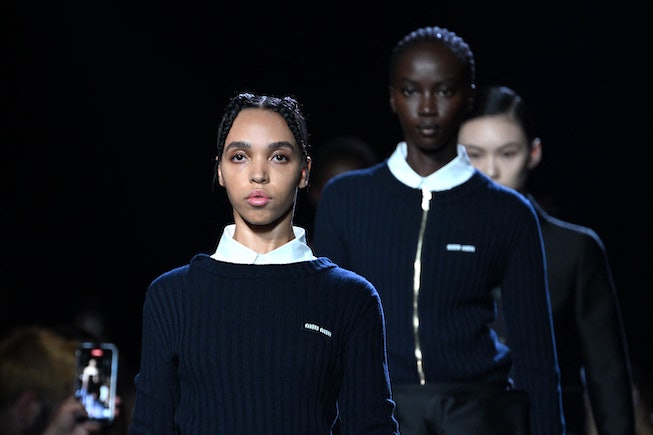 Miu Miu gave us a true gift this Paris Fashion Week: something to talk about other than that micro mini skirt.

Twigs, who was wearing a mini (albeit in a new, more minimalist design with large pockets on the front), closed the show in a cable knit sweater layered over a collared shirt and a pair of knee-high boot flip-flops. Cain’s look was a bit more elaborate: a long, beaded skirt and top layered under a T-shirt, paired with socks and loafers.

Despite casting one of the most visible fashion week faces, it’s not unlike the brand to tap surprising models for a runway cameo. Last season, Creative Director Miuccia Prada cast non-binary actor Bridgette Lundy-Paine, as well as artist Gregory Rouy, to walk. Both then and now, they brought a much needed change of pace to a pretty status quo string of shows.

Cain’s fans could hardly contain their excitement upon seeing her walk the runway. After the singer tweeted a video of herself walking the show, the replies were a combination of “gagged,” “u ate,” and simply “SLAY.”

Prada merged the music, fashion, and art worlds even further by partnering with artist Shuang Li on an installation displayed during the show, reminiscent of a massive wind turbine.

“The seemingly wireless ‘cloud’ is supported by tens of thousands of kilometers of undersea cabling which populates the ocean floor,” the brand wrote on Instagram. “#ShuangLi’s work explores this tension between the material and immaterial, and the obfuscation thereof – the physical bodies of what we commonly think of as immaterial material sent via digital platforms. The messages lost in transmission do not just disappear, but rather, imagined here, can take on another form, punctuating the sky.”

Even with an understated collection, the brand made a bold, beautiful statement all around. Check out more photos from the show below.