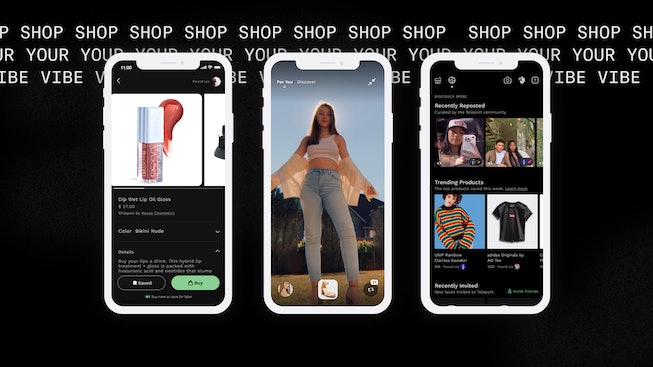 Shopping on your phone, whether it's through social media or on an online marketplace, has become more seamless than ever before in the past few years. Instagram has added features to make impulse purchases directly on the platform, while TikTok is increasingly offering viral-worthy fashion content. Now, Teleport is the latest app to join in on the fun, offering short, user-created videos that are entirely shoppable.

Unlike most online platforms, Teleport is built to share its revenue with its creators from the jump. For any sale made from a video, users can earn a base rate of 1% paid directly by Teleport. And since it's still in the early stages of a soft launch, the new app is accepting applications for their first 100 partners, which can receive a 5x bonus on their base rate for the first $1 million in sales.

"I started to experiment with the idea of what the internet and economy would look like if there was a company that focused on paying creatives first," Founder and CEO Jon Choi tells NYLON. "It comes from my personal experience of seeing creators not being paid and that's something that we want to fix. I come from Silicon Valley where everyone is highly paid and I couldn't reconcile in my head why our economy pays for certain things and not for other things."

The way that Teleport works is similar to TikTok where the content is made up of short 20-second clips created by its users, from a lip-syncing video to a transition-filled montage of different outfits. Within each video are thumbnails of featured items — say, for example, that lip syncer's argyle-printed sweater from Brandy Melville and hoop earrings from Madewell — that you can directly order via Teleport with Apple Pay. The purchases are then fulfilled by those brands or retailers.

"The content is different because we focus on showing the product rather than talking about it," says Choi. "How does it look like in the day of your life and is that something that I want? That's the discovery that we want to facilitate." So rather than being served sponsored ads and paid content that might feel out of the ordinary from some users, Teleport aims to give more context to users' favorite and most tried-and-true products. Think of it as the anti-infomercial where you can conveniently discover brands and items without tapping through tagged accounts or scrolling the comments.

In about two weeks, Teleport will add comments to the app, so users can engage with each other about the shoppable items. "Our comments are actually less about Instagram comments where you're trying to be seen, or a TikTok comment where you're trying to be clever," says Choi. "Our comments are going to involve questions like, 'Why did you buy this? What can you wear it with?' So it's a real conversation starter between the tastemaker and user." Plus, a user's Teleport page serves more as Pinterest board than a highlight reel. Each upload can be reposted onto your profile with an emoji — a mix between a reaction and endorsement to help showcase your own personal aesthetic.

Instead of followers, Teleport profiles include "rep" counts, which is reputation-based and tallies how much users have been participating and how much they can be trusted for their product recommendations. "It's not just a platform for influencers with lots of followers to sell them junk," says Choi. "It's a place to recommend things you love and when people love it, that reputation matters so much more than followers. Is your taste trusted? That's what we care about."

Teleport is available for download now with the invite code NYLON.