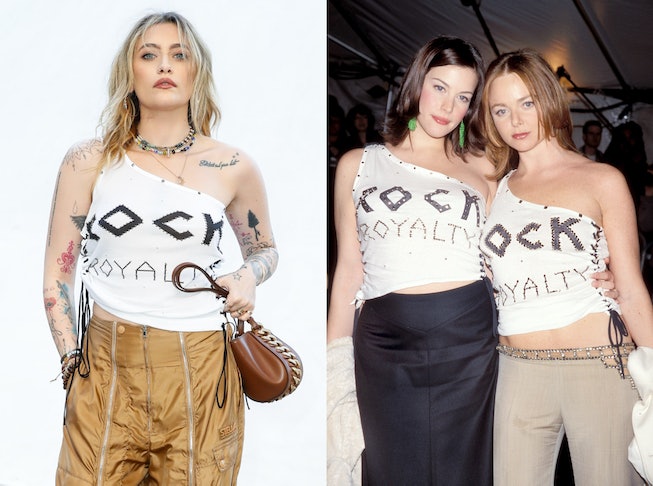 Paris Jackson is officially the next generation of “Rock Royalty,” according to Stella McCartney. The daughter of the late pop legend Michael Jackson attended the British designer’s Spring 2022 runway show during Paris Fashion Week on Monday, Oct. 4, and her look paid tribute to the ‘90s.

Jackson’s one-shoulder top, bedazzled and emblazoned with the phrase “Rock Royalty,” is the same exact look that Liv Tyler and Stella McCartney, daughters of Aerosmith’s Steven Tyler and Paul McCartney of The Beatles, respectively, wore to the 1999 Met Gala. Fittingly, the theme of that year’s red carpet, which took place in December rather than the first Monday of May, was inspired by the exhibition Rock Style and hosted by Tommy Hilfiger. The Metropolitan Museum of Art’s Costume Institute explored more than forty rock artists’ influence on fashion, featuring outfits from Madonna, David Bowie, Elvis Presley, and more, as well as the Rock & Roll Hall of Fame and Museum.

Jackson has been making the rounds at Paris Fashion Week this season. In addition to sitting front row at Stella McCartney, she also attended Vivienne Westwood’s runway show and the 100th Anniversary Exhibition Of Vogue Paris.

The 23-year-old’s throwback look has been a running sartorial theme for celebrity appearances lately. At the 2021 MTV VMAs, a slew of red carpet looks were a blast from the Y2K fashion past, including Bretman Rock in Aaliyah’s Roberto Cavalli dress from the 2000 MTV VMAs and Madison Beer wearing a dress that Beyoncé also wore in 2003. Plus, Armani has been dressing its celebrity clientele in archive runway looks at major red carpet events, as well Versace, who dressed Dua Lipa for the 2021 Grammys in a shimmery butterfly dress that paid homage to Christina Aguilera’s own 2000 Grammys look.

See Paris Jackson’s “Rock Royalty” top, as well as the original worn by Liv Tyler and Stella McCartney at the 1999 Met Gala, in more detail, below.