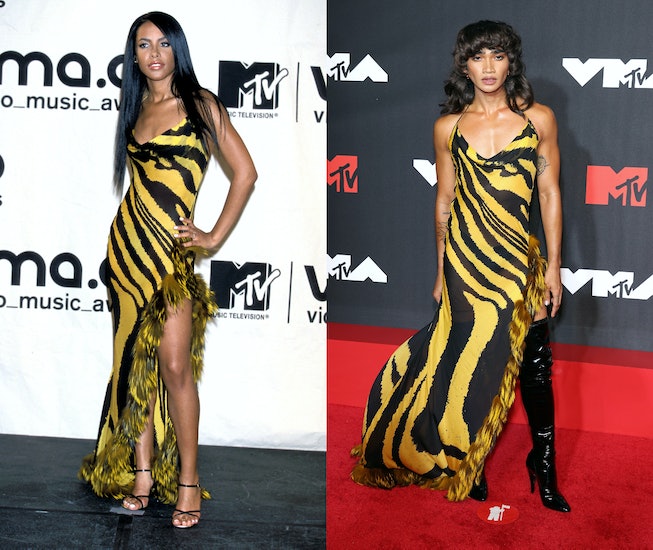 The 2021 MTV Music Video Awards, hosted by Doja Cat, celebrated the network’s 40th anniversary, but its guests arrived honoring the fashion that came decades before them. The red carpet was full of early-aughts looks — and in some cases, actual archival pieces from that era — that left us wondering if this year’s ticket came with a nostalgia-heavy dress code. If so, everyone understood the assignment, but some viewers were less than impressed by the familiar looks.

From Madison Beer’s Beyoncé tribute to Lil Nas X’s Lil’ Kim-inspired suit, take a look at the 2021 MTV VMAs red carpet looks that were a blast from the Y2K past:

Madison Beer arrived in a vintage Dolce & Gabbana dress that Beyoncé wore on back in 2003 for an appearance on The Late Show with David Letterman. While Beyoncé kept the dress’s lace-up details intact, Beer opted to remove some of the lacing to show off a bit of leg.

Madison Beer at the 2021 MTV VMAs.Udo Salters/Patrick McMullan/Getty Images
Beyoncé in 2003 at The Late Show with David Letterman.James Devaney/WireImage/Getty Images

Bretman Rock stepped out in a vintage Roberto Cavalli dress, which the late singer Aaliyah famously wore to the 2000 MTV VMAs. “No one will ever rock it like Aaliyah 🐯 Thank you so much @roberto_cavalli for letting me wear this special piece,” wrote Rock in a caption on Instagram. “I never thought I would ever be able to wear this, let alone be in the VMAs, when they said I could wear it I literally cried of disbelief… I love Aaliyah and am so honored to have been able to wear this 21 years after her. We love you 🕊.”

Avril Lavigne channeled herself on the red carpet, returning to the 2021 MTV VMAs for the first time in 18 years in a hot pink plaid suit straight out of the early 2000s. (OK, it was really from Area’s Pre-Fall 2021 collection.)

Tinashe (and her abs) posed in vintage, low-rise Dolce & Gabbana leather pants from its Spring 2003 collection and a black bra top.

The outfits may have been on point — if the point was to emulate the early 2000s — but some people are ready to leave that fashion era behind. Critics argued the references are overused, pointing out “lazy” styling and a lack of original ideas.