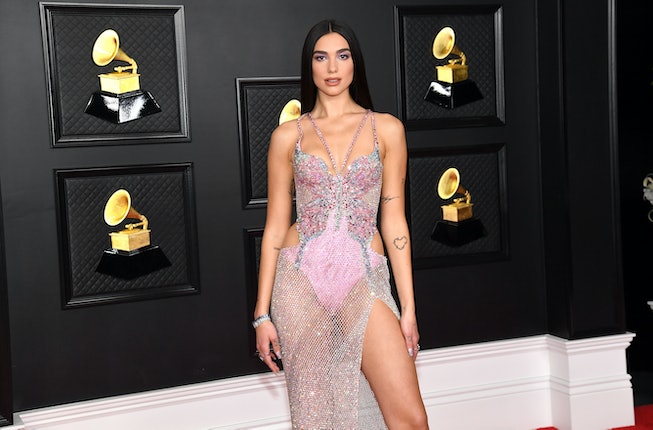 The parallels between Dua Lipa and an early-aughts Christina Aguilera are simply too obvious to ignore. For the 2021 Grammys, Lipa wore a custom Atelier Versace gown with an embellished butterfly, paired with Bulgari jewels — a slinky and sparkly ode to Aguilera’s silver butterfly Versace dress from the 2000 Grammys.

Back in 2000, Aguilera won the Best New Artist Grammy in the Versace number, the same award won by Lipa in 2019. That year, Lipa wore a silver metallic Atelier Versace gown.

Lipa may be hoping for some good luck from Versace on Sunday night. The pop star is nominated for five awards: Record of the Year, Album of the Year, Best Pop Solo Performance, Best Pop Vocal Album, and Best Pop Duo/Group Performance.

"There was definitely a moment where I was thinking about it, whether it was the right decision to put this album out. But when I was making this album, it really, it served, like, a form of escapism," Lipa said during an interview with Gayle King, discussing her lauded album Future Nostalgia. "I had to go with my gut instinct that, that hopefully, it will serve as some light in the darkness and keep people dancing at home. And maybe this is exactly the perfect time to put it out."

With added boosts from Versace and Aguilera behind her, Dua Lipa may be the queen of the 2021 Grammys very soon.

Take a look at Lipa and Aguilera’s Versace looks, below.