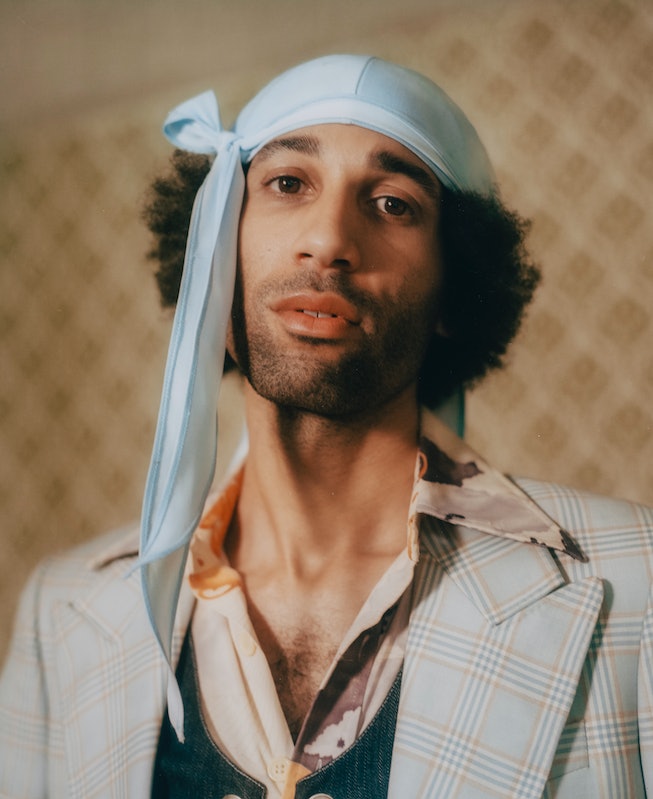 When it comes to groundbreaking fashion these days, creativity and social media go hand in hand. Not only are online platforms like Instagram a great way to build an audience and global presence, but plenty of fashion designers, especially of small indie brands, have built their entire businesses in a digital world.

"My relationship with the internet is very multi-faceted, and I feel like it just changes and evolves daily," says James Flemons, the designer behind Los Angeles-based brand Phlemuns whose success stems from being extremely online from as early as Tumblr's heyday in 2011.

The pandemic has certainly influenced how much time is spent online, whether it's discovering new content on TikTok or making millions on the paid-subscription-only platform OnlyFans. The latter is something that Flemons is looking to join soon, in hopes that his creative content will only serve his true followers, rather than major fashion brands or professionals who may take a little too much inspiration from his work.

Ahead, in his own words, Flemons talks about his relationship with social media and how that has helped (and sometimes hindered) his creative work as a designer.

“Tumblr is so sacred to me because I think out of all the social media platforms, that was the one that really, really nurtured me, and it was the first place I was seen.

I started Tumblr during the last two months I lived in New York. I was living with my friend Victoria, who I went to college with in San Francisco, and we sat in her apartment for literally 48 hours discovering accounts and images, re-blogging, and immersing ourselves in Tumblr and got so obsessed with it.

I grew so much because of the community that embraced me. So many people wouldn't even know who I was and what my brand was if it wasn't for Tumblr. The friends that I made there really, really supported me, and have to this day. It's crazy to think I've had friends for 10 years that I've never met before.

There's something about the freedom there to just explore so many different worlds. I've always been such a visual person. That was a way for me to break through my insecurities and find like-minded people. It's kind of like the place for loners and losers if I'm being really 100 percent about it. Not everyone's interaction with the platform is like that, but a huge part of the community is that.

I didn't start Tumblr thinking it would have any real effect on me as a designer, but it actually plays a huge role in my design process. I didn't even realize it until maybe my Spring 2016 collection, when that came to fruition and I was like, ‘Oh, I can spot all of these references as these things, I remember what inspired that stitch, or the silhouette of this pant.’ And I can go back through my archives on my Tumblr and find that inspiration, which I think is really interesting.

Then it was the first place I started sharing my own work. Phlemuns really started on Tumblr, and I later found out it was also a tool that people in fashion use, like editors and stylists. Most people in the fashion industry discovered me on Tumblr before they discovered me on Instagram.

Also, on the negative side, because I shared all my work and my inspiration there, it gave everyone an opportunity to use me as a mood board. I started to not use Tumblr as much because of that, and then they had the NSFW ban, which really killed the life on Tumblr. A lot of the community left, a lot of that self-expression left. I focus more on Instagram. I have such a love-hate relationship — more hate than love — on Instagram, so that’s always a battle.

"When [the pandemic started], I started to tap into Twitter. I was never really good with using my words and my voice, but I've become more comfortable with that. It can be a little scary putting words down that get circulated and can be traced. That brings up a little bit of anxiety, especially in the age we're in today with cancel and call-out culture. It's like walking on eggshells.

It's also really interesting to see on Twitter how people have these profound points of view [on fashion], but also come from all different backgrounds of experience. I find myself going on these spirals and discovering different people who aren't technically in the industry and have a lot of similar points of view that I do — a lot of specifically people of color and Black people. It also led me to wondering why aren't all of us coming together to do our own thing as opposed to trying to break down these barriers and walls? So Twitter really opened up this whole other world of the fashion industry to me.

But I’ve been told by numerous people that I've been on [brand and designer] mood boards left and right. So many people are like, ‘Oh, I saw you on this mood board,’ or the people who use trend forecasters for their jobs — people pay thousands of dollars for that.

I'm sitting at home not able to pay rent, while people are making money off of sharing my designs. And then it cycles back into something that looks like mine out in the world that has a bigger machine power behind it. I can't fight against that when it's just me. I know people from H&M follow me, I know people from Zara follow me. I can't compete with those powerhouses. So it's this twisted cycle that I can never really get on top of. The only thing that has kept me going is I know I'm always going to have ideas, that's something I can count on.

I need Instagram to keep my business functioning because it is my outlet to the world. It's the way I generate custom jobs and new customers. It's hard to even think of what life was with a business without it, to be honest.

"I’m sick of the censorship on Instagram. I'm sick of the algorithm. I'm sick of being stolen from constantly. There's all these things that I fight with, and it looks like OnlyFans caters to all these things that I am fighting against. And technically, OnlyFans wasn't made specifically for sexual content, but people saw an opportunity to express themselves on OnlyFans. It really opened up the conversation about sexual expression.

I also think there is a history in our country of shaming sex workers, when a lot of people of color are forced into sex work because they can't get regular jobs. So it touches on a lot of topics and conversations that need to be had, a lot of things that have been villainized in our society that have come down to money and power.

OnlyFans is a way for a lot of these marginalized groups to be seen and be able to express themselves and be profitable. I was thinking of how I can utilize this platform, and monetize off of my presence on social media. As I thought about it more, and I talked to more people who have OnlyFans, I started being more engaged in discovering what the platform is about, and then also not being so afraid to talk to people about having this idea. Then gradually, over maybe six months or so, it started coming together for how I want to utilize OnlyFans, and how I want to make it a way for me, and others, to make money. I've always tried to use my platforms as much as possible to service and help other people, as well.

I can focus my creative content more geared towards OnlyFans, and be able to actually have a platform where I can engage a bit more directly with my followers. If you're going to pay to be on my account, then you actually really support me. If you want to steal from me and pay for my OnlyFans, at least I'm going to make a little money off of it, as opposed to not.

"Sure, maybe there might be some NSFW content on there, not necessarily explicit, but that's also a history within fashion — nudity and self-expression and all of these kinds of things. It's always been a way for the outsiders and the freaks and the people who have these specific niches to express themselves. So much of fashion history was a rebellion, but the politics of fashion has completely changed because there's money attached to it, as opposed to creative expression.

There's a lot of me that is such a purist. I really like to come back to what the purpose of the designer, or the purpose of a fashion house really is and means, especially today where consumers are so interested in the story or person behind what they're actually supporting.

OnlyFans feels like a cool way to venture into the new age. It’s perfect timing because I personally have felt like the past five to 10 years of society have just been so stagnant, creatively and socially. I really have been wanting to see where a change was going to come, and COVID has brought along such a huge change. Being a part of righting as many wrongs as possible, and bringing visibility to so many people who have been marginalized and demonized or shunned or shushed.

There's been a complete power shift. I'm happy to see that the conversations are expanding, there's change actually happening, and people are being able to express themselves without fear. Because it's like, hey, we've got nothing else to lose at this point, so let's let it all hang out.”