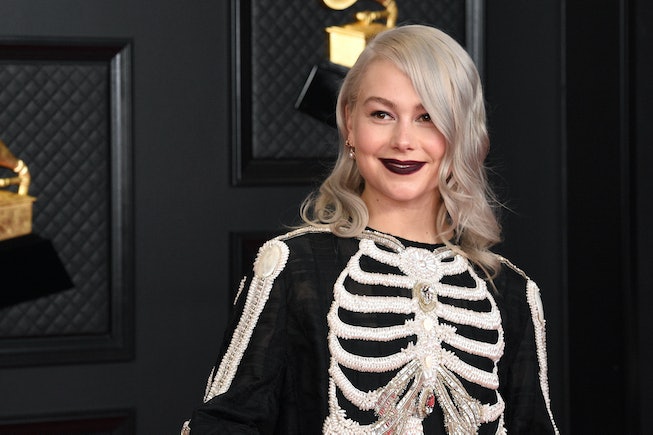 While this year’s awards season is a bit different, the 2021 Grammys marks one of Phoebe Bridgers’ first official red carpet appearances and the Punisher artist wore her signature skeleton outfit created by Thom Browne. Bridgers’ fashion choice stayed true to her longtime goth-leaning aesthetic, sticking with a black-and-white color palette. During the press tour of her latest album, she often wore a skeleton suit, which has since become some of her bestselling merch, on stage during live performances and television appearances.

Bridgers, who took the red carpet with her brother Jackson, is nominated for four Grammy awards, including Best New Artist and Best Alternative Music Album, as well as Best Rock Song and Best Rock Performance for the her hit single “Kyoto.” The singer-songwriter actually slept in on the morning of the 2021 Grammy nominations announcement, only to wake up to her phone blowing up with messages. “That day is forever immortalized on my phone as the day that I responded to no one,” she told NYLON.

In typical Phoebe fashion, she acknowledged her career milestone via Twitter. “I just woke up what,” she tweeted and then suggested a duel with fellow nominee Megan Thee Stallion.