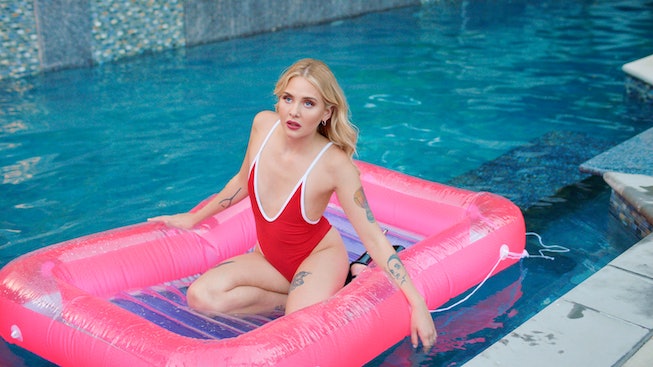 “We were really lucky to have Ninja, a director who spent years researching this topic, and the amount of research she had to share with the rest of the creative team was staggering,” says Lee. “I definitely asked her for contacts of professionals within the industry to have my own little interviews with them.” Casey Calvert, a popular performer who appears in a small role, was particularly helpful to Lee. “She guided me and gave me tips of where the professionals would shop and how they would wisely use their resources.”

Costuming the film involved a lot of trips to sex shops.

Lee “definitely wanted to keep it authentic.” In order to do this, she went straight to the source: “There were a lot of adult stores in Hollywood that I went to. There are two or three blocks in the heart of Hollywood where basically you just go into one store after the next.” While Lee initially considered custom-made pieces for the film, she ended up relying on these shops and designers specializing in materials like latex instead.

“I definitely didn’t shop at any super expensive places just because that was just not where the characters would go,” Lee explains. There’s an old-school appeal to the shops she visited, and the distinct character of each one proved helpful to Lee: “Each store has their own kind of genres that they specialize in, and for the owners it’s their own family store kind of thing. They’re experts in it. They definitely helped me out a lot.” It was important for Lee to get a real-life sense of the materials she’d be working with. As she recalls, “I actually don’t think that we did any shopping online, to be honest. You want to feel the material. Obviously the kind of performance that they’re in, it’s tactile.”

Showing the same article of clothing more than once aided in character development.

Bella can be seen wearing a T-shirt with a repeated graphic reading “Girls run things” rendered in the style of a classic “Thank you” grocery bag in multiple contexts. “As a designer, those are little things that I love,” says Lee. “Whenever I can, I like to bring back pieces that I can imagine the character has as their comfort T-shirt or their jacket that they like to feel good in. I think it’s important to put in pieces like that so that the audience can relate more to the character,” she explains. Part of the design process is always asking questions like “What is the character’s daily routine? What are they comfortable in? What do they wear to present themselves?” and a cheeky graphic tee worn multiple times while off-duty makes for a good contrast to the clothes (or lack thereof) required for Bella’s work.

Social media was a key influence.

Like many young women, Bella is very active online, and Lee used social media extensively in her research. “I looked into both L.A.-based and Sweden-based accounts to see what those differences were,” she says. “The accounts really helped me, because a lot of times the girls will give shoutouts to brands or specific designers, especially if they’re wearing a latex suit or something like that.” These posts gave Lee a fuller idea of what women in the industry were wearing. “There are just so many different styles, from the pink, almost middle-school kind of outfits to the all-black BDSM looks. It was so helpful to just see how everyone has their niche, and they have fun within that genre.”

Bright colors were a necessity.

From the very beginning, bright colors were a vital part of the film. “There was one image that Ninja showed us that was burned into all of our brains from the get-go.” Lee explains, “It was a candid photo of a sex worker in neon with amazing platform heels on. She’s sitting on this vintage ‘70s floral multicolor couch. She’s just on her phone and it’s so amazing. It’s so artistic, that photo, and we just took so much inspiration from it.”

In her own research, Lee came across the work of Larry Sultan, a photographer who shot a series of images on porn sets in the ‘90s and ‘00s. “They are absolutely amazing,” says Lee. “They’re full of colors obviously, and both performers and the film crew are in these photos. Some of them are almost comical because you’re seeing these performers waiting for their next take or they’re just lounging on these heavy shag carpets in a really kind of relaxed and lazy, almost childlike way, and they’re in costume. There’s a weird juxtaposition there.” Lee ultimately found more inspiration in Sultan’s work than in other films set in the sex industry. In terms of cinematic inspiration, “I was looking to films that gave me that color palette that I was looking for,” she explains, citing the chaotic neon of Gaspar Noé’s controversial 2009 film Enter the Void as a key reference point.

While Pleasure has moments of darkness and violence, Lee felt that when it came to the costumes, “There was no point in making it dull and drab, because we’re seeing it through her eyes. It was important to me to really show the audience that it’s not this scary world. Of course scary things do happen, but that’s not why she comes to the States to begin with. It’s full of hope and excitement.” The use of highlighter-bright colors throughout emphasizes that “the reason that Bella travels across the world to do this is that this is her dream and this is fun,” says Lee.

Lee’s favorite costume (which was also one Kappel’s favorites) is a black lace choker, bustier, and caged skirt ensemble that Bella wears at a mansion party. “A lot of those pieces are actually separates. They didn’t come that way,” she says. “It was really fun to put it together and really think about how she is mentally and emotionally in that moment. It’s this weird thing where it’s almost like she’s locked in her costume, even though you see so much skin. There are lines going from her neck and her bosom, lines caging her thighs.” Lee sees the outfit as a study in contrasts: “It’s very revealing, but I love that you almost feel you want to take it off for her and free her.”

Pleasure is in theaters now.

NEXT UP
fashion
How ‘Spice World’'s Costume Designer Nailed The ‘Scooby-Doo on Acid’ Look
Culture
Loewe’s Howl's Moving Castle Collection Is An Anime Dream
Culture
The Cutest Couples At The 2023 Grammys
Fashion
Jenna Ortega Is The Face Of Adidas’ Newest Line
Style + Culture, delivered straight to your inbox.