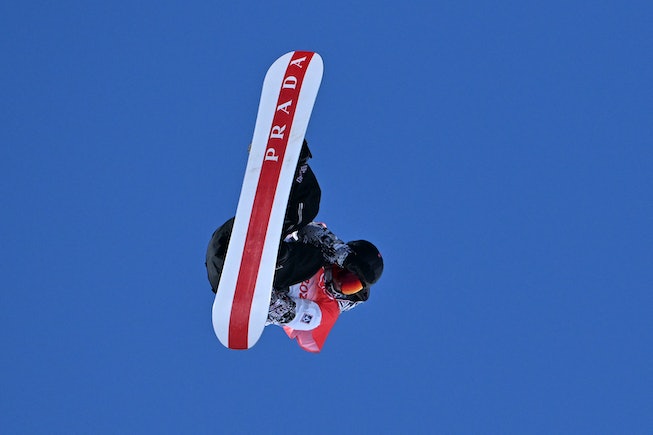 The 2022 Winter Olympics in Beijing are officially underway, and Team USA already won its first medal over the weekend, along with a major high-fashion moment. On Sunday, Feb. 6, snowboarding champ Julia Marino brought home a silver medal for the Women’s Slopestyle event, but what caught most of the world’s attention was her Prada snowboard.

The red-and-white board, emblazoned with the Italian fashion house’s signature logo from its Linea Rossa line, was an unexpected and exciting designer cameo on the slopes, which is generally filled with more sport-affiliated brands, like Burton, Salomon, and Volcom — the latter also outfitted the U.S. snowboarding team this year. Prada, however, has been leaning back into its high-performance roots over the years, after relaunching Linea Rossa (also known as “Prada Sport”) in 2018. The luxury label first debuted the athlete-inspired “Red Line” in 1997, only to discontinue it by the mid-aughts. Ahead of its relaunch, the niche sub-label — most famous for its nylon accessories and apparel — already had a growing fanbase, from gorpcore aesthetes to celebrity fans, like A$AP Rocky.

Plus, Marino’s affiliation with Prada was official well before her big win at the Olympics. She was also the face of Line Rossa’s Fall 2021 ski campaign, modeling alongside British-American freestyle skier Gus Kenworthy.

“Still processing all this. Being partnered with a brand like @prada is something I never thought I would get to experience, let alone be part of their #PradaLineaRossaSki FW21 campaign,” wrote Marino in an Instagram post to announce her campaign debut in November 2021. “Seeing the opportunity this has to grow snowboarding by merging with a high fashion brand makes me so excited to get out and ride. Check out all the new Prada Linea Rossa’s high performance ski and snowboard winter line gear at the link in my story.”

For those interested in channeling your inner Marino on the slopes, you can also cop your own Prada Linea Rossa snowboard (for a cool $3,600), helmet ($725), and goggles ($595), as well as other snow gear on Prada’s website.

Prada wasn’t the only luxury brand to team up with USA’s snowboarders. Three-time Olympic gold medalist Shaun White, who recently announced his retirement after competing at the 2022 Winter Olympics, shared his Louis Vuitton collaboration with Virgil Abloh. The late menswear artistic director helped White with the launch of his own lifestyle label, Whitespace, and created a customized luggage collection for the athlete’s Olympic kit, including a snowboard and guitar case — two debut designs from the French fashion house.

“It saddens me to know he never got to see the finished product, but I know that he would have loved it,” shared White in an Instagram post just before the start o the Winter Olympics in Beijing. “I’m going to run it proudly in his memory as I get ready to travel to the Olympics for my 5th and final time. A huge thank you to everyone on the Louis Vuitton team for making my dream come true. But most of all, Thank you, Virgil. Rest in Power, my friend.”