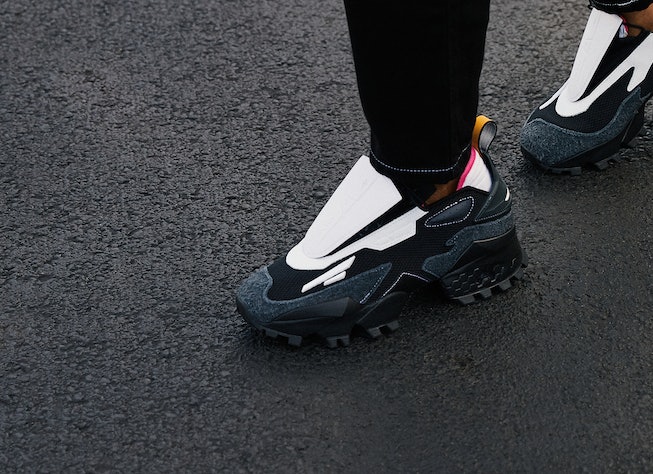 Pyer Moss is partnering with the Innocence Project on its latest sneaker release. The Experiment 4 "Innocence Project" sneakers will be available exclusively on Pyer Moss' website for $250, with a portion of the proceeds going toward the nonprofit organization, which works to exonerate people in the prison system who have been wrongfully convicted.

Each style element is thoughtfully designed by founder and creative director Kerby Jean-Raymond. The shoe is broken up into three layers and each one represents "all those who climb to success through the creation of something sacred in the face of adversity." The lower mudguard is meant to symbolize "those who have been told they cannot extend past the boundaries that have been set for them," while the middle knit section represents "subtle excess, glamour, and the expression of success" and the soft top is for emotion.

Pyer Moss has previously collaborated with Reebok on a series of "Experiment" sneakers in the same chunky silhouette, but this is the first time Jean-Raymond, who holds an artistic director role at the global sportswear brand, has combined it with his messaging of social justice. Jean-Raymond has spent years using his brand as a conduit for social issues he cares about, particularly the Black Lives Matter movement, which has been a prominent feature in his runway shows since 2015.

Check out the new Experiment 4 "Innocent Project" sneaker in closer detail, below, and mark your calendars to purchase it on PyerMoss.com on Friday, July 3, at 12 pm ET. Whether you cop a pair or not, Jean-Raymond encourages the public to make a donation to the Innocence Project, as well.