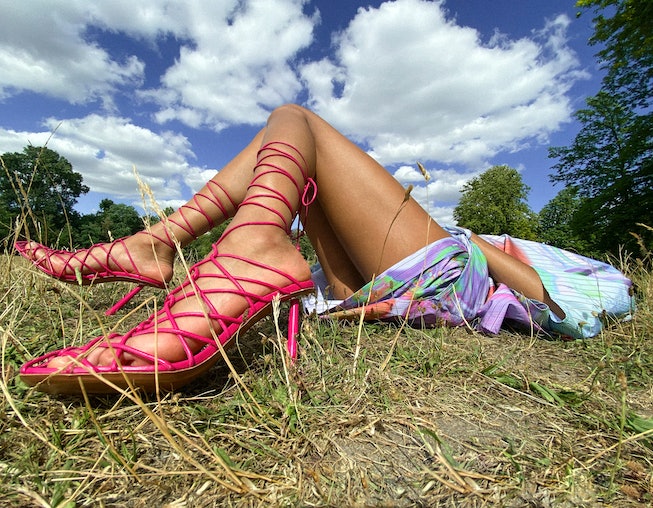 Rihanna's has another fashion drop to update our summer wardrobes. Fenty released a new collection of footwear in collaboration with Amina Muaddi, the singer-turned-entrepreneur's favorite shoe designer.

The partnership kicked off in the DMs between Muaddi and Fenty Creative Director Jahleel Weaver. "I had purchased some of her shoes for Rihanna for projects we were doing, and I reached out saying I was such a fan," he said in a phone call to Mauddi for Vogue. "We later scheduled a meet-up and a cocktail — from there it's been history."

"It was very exciting to find that Fenty identity," Mauddi said. "I wanted to start from scratch. I wanted the shoes to emphasize Fenty's aesthetic and have Rihanna's feminine yet edgy vision and style, but do it through my own lens."

The shoes mark the first time the Fenty brand has teamed up with another designer to collaborate on one of their highly anticipated drops.

"[Weaver] told me which he liked the most and was super happy with the proposal," added Mauddi. "Later on we had a meeting with Rihanna in London and that's when we showed her and the other people in the meeting the colored sketches. She chose the ones that she liked the most."

The new Fenty x Amina Muaddi shoe drop is available to purchase on the brand's website now with prices starting at $490. See more of the collaboration's campaign, below.