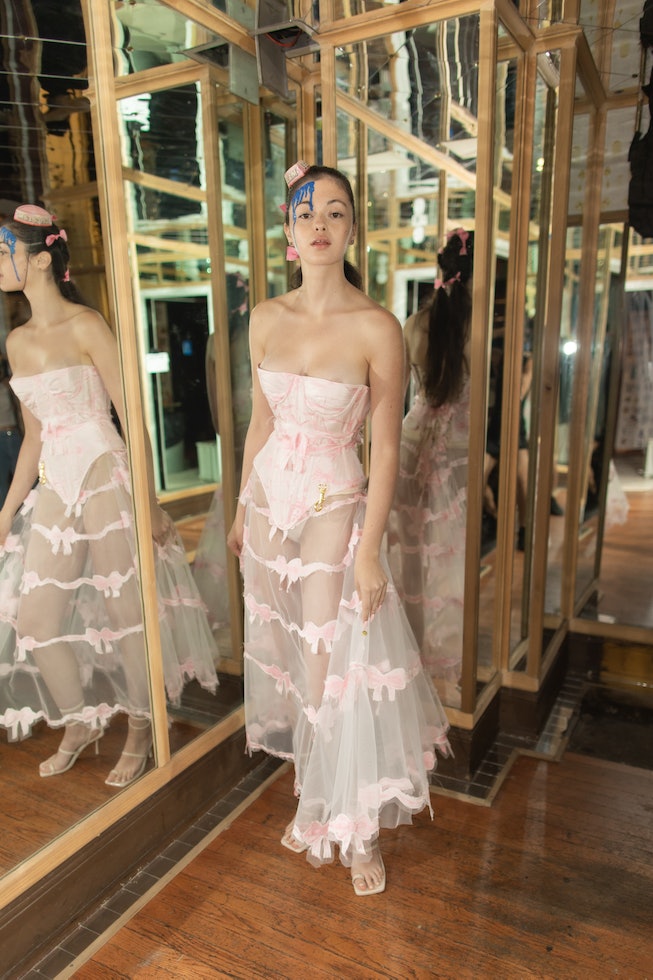 “I think one of the most disappointing developments of the 21st century is that we lost petticoats,” Sintra Martins, the designer behind Saint Sintra, reveals after her Spring 2022 runway show on Tuesday. “I’m fighting to bring back the petticoat.” And Martins’ latest collection — her brand’s second ever — certainly makes a strong case for the revival of that turn-of-the-century undergarment. Although, the designer adds, you can also “never go wrong with a mesh hoodie.”

This may be the first time Saint Sintra has shown at New York Fashion Week, but the recent Parsons grad has already compiled a loyal, and very high-profile, roster of fans, as evidenced by the runway show’s front row, featuring the likes of Kim Petras and The Clermont Twins. And they’re not the only stars who have resonated with this young designer’s work that blends old-world construction with the high-low glamour of early-aughts pop culture. This summer, Martins designed a custom dress for the cover of Slayyyter’s debut album, Troubled Paradise, and gave a sneak peek at her newest collection in the Petra Collins-directed, Y2K-heavy music video for Olivia Rodrigo’s song “Brutal.” Her clothes have also appeared on Tinashe, Azealia Banks, and Japanese Breakfast.

Martins explains that she thinks these pop stars resonate so strongly with her work because of its ability to reclaim ornamental details once dismissed as overly girly or froufrou, like ruffles, ribbons, and lace, and transform them into something undeniably powerful. “The aesthetic of the brand is all about a masculine femininity — an aggressive femininity that transcends gender,” she explains. “Not to make it all about gender, but I think that clothes do ultimately have a lot to do with identity and self-expression. And as a woman designing clothes, it would be impossible for that to not influence my designs.”

But for Saint Sintra’s second installment, the designer wanted to find a way to take the more conceptual, artistic pieces from her first collection and turn them into something more palatable for the everyday wearer. “I think this collection was much more about bringing the Saint Sintra universe to the real world and developing a collection that could be worn,” Martins says. “I think the last collection was interesting, it was very beautiful, but it was ultimately a little bit intimidating. But this collection is a contextualization of who Saint Sintra is.” The designer adds, “I like creating a collection of pieces that can be used interchangeably. I really wanted to introduce the version of Saint Sintra for people to see themselves in.”

The invitation for the brand’s Spring 2022 collection promised guests “a technicolor hyperpop dystopia,” exploring “the post-analogue world through a frivolous, hedonistic lens that captures the spirit of youth.” In slightly more concrete terms, Martins explains, “I’d been watching Star Trek for pretty much all of January. And then immediately after watching Star Trek, I started listening to Arthurian lore, and I listened to the entire Lord of the Rings audiobooks. I was all over the place.” But, she adds, “I think that kind of discombobulation really inspired the collection, and it’s visible,” from her Y2K twist on those aforementioned petticoats, to the totally sheer, neon dresses and tracksuits bedazzled with rhinestones in the shape of emoji sparkles, to the Josephine Baker-worthy, barely-there beaded dresses and feathered bodysuits that closed out the collection.

That hodgepodge of unexpectedly coherent visual non sequiturs also extended to the venue for the runway show itself, The Stranger, a nightclub located in a midtown Manhattan basement and decorated like a mix between Pee-wee’s Playhouse and a raver’s reimagining of the Rainforest Cafe. An illuminated scoreboard and disco ball decorated one wall, while a waterfall and bisected life-size dollhouse obscured the other, all under the watchful gaze of an animatronic elephant that would periodically swing its trunk out over the audience seated below in lawn chairs and banquettes upholstered in grandmotherly florals. Models walked on an astroturf-lined runway, circling an oversized bust of Michaelangelo’s David to techno remixes of songs like Blondie’s cover of “The Tide Is High” and Gwen Stefani’s “What You Waiting For?”

This subterranean wonderland Saint Sintra created, via both the choice in venue and a collection that grounded mall-rat trends in couture techniques, would be a major coup for any designer, let alone one still so early on in her career. But there was yet another millennial fantasy that Martins managed to impart that day, providing her audience with an authentic throwback experience to the era so often channeled in her work: an internet-free hour, courtesy of the underground location’s total lack of cell phone reception.

Courtesy of Neva Wireko/Saint Sintra
NEXT UP
Fashion
The Wildest Front-Row Looks From Couture Week In Paris
Fashion
Bottega Veneta Just Dropped The Next It Bag For Spring
Fashion
Apple Martin Is A Chanel Girl Now
Culture
The Cutest Couples At The 2023 Grammys
Style + Culture, delivered straight to your inbox.