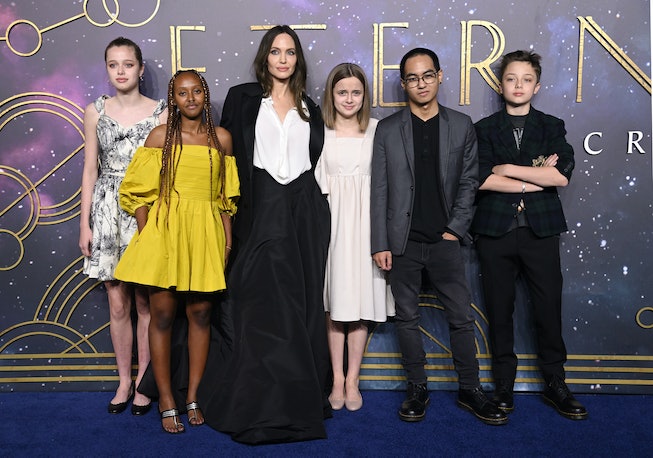 As the promo tour for the upcoming superhero film Eternals continues, we’ve been treated with some head-turning red carpet looks, especially from Angelina Jolie’s family.

The group first made a buzz-worthy appearance at the Eternals premiere held in Los Angeles a couple of weeks on Oct. 18, with her 16-year-old daughter Zahara Jolie-Pitt making headlines in a shimmery haute couture gown from Elie Saab that the actress wore at the 2014 Oscars. Plus, Shiloh, 15, was dressed in a Gabriela Hearst look that her mother wore back in July at Guerlain’s “Women for Bees” initiative event in Paris.

On Wednesday, Oct. 27, Jolie and five (out of six) of her children were spotted at the film’s most recent premiere on London, and as expected, we saw yet another borrowed look from Jolie’s wardrobe.

Shiloh was seen at the red carpet affair wearing a printed Dior dress, which the actress originally wore to the global press conference for Disney’s Maleficent: Mistress of Evil in 2019. But the teenage daughter put her own Gen-Z spin on her mother’s ensemble, altering it into a mini dress. She finished her look with black ballet flats.

Shiloh was joined by the rest of her siblings, including Zahara posing next to her in a yellow off-the-shoulder dress from Valentino’s Resort 2022 collection and metallic sandals. Next to Angelina was 13-year-old Vivienne, who wore the same cream-colored midi dress that she wore at the L.A. premiere of Eternals, along with her twin brother Knox and oldest brother Maddox, 20, in sleek suited looks with Dr. Martens. As for Angelina, she wore a tuxedo-inspired custom haute couture gown by Valentino, which was styled by Jason Bolden.

You can see more of Shiloh Jolie-Pitt’s reworked dress alongside Angelina Jolie’s original 2019 appearance, below.