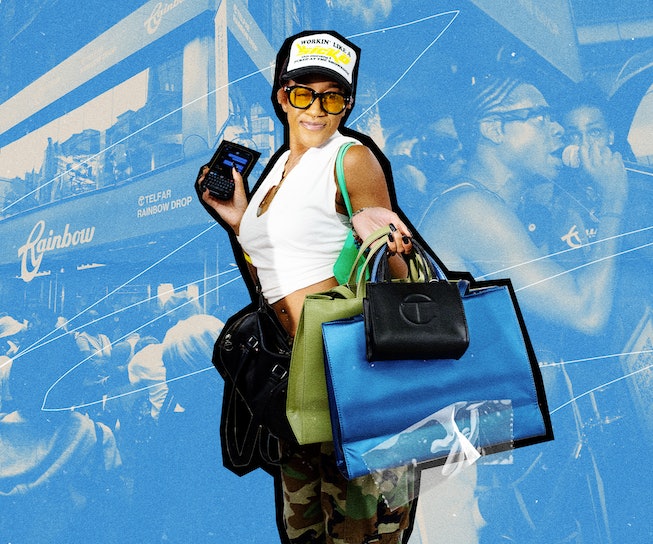 In the middle of New York Fashion Week, thousands of shoppers descended on Fulton Street in New York City this past Sunday, vying for a chance to take home one of the decade’s most-wanted accessories: a Telfar bag. It wasn’t the Fulton Street of Manhattan’s bastion of privilege, the Financial District, but rather Fulton Street in the historically-Black neighborhood of Downtown Brooklyn, where Telfar Clemens announced his eponymous brand would be popping up last week.

Despite the rain, those waiting to enter the two-story Rainbow Shops, Clemens’ retail partner of choice, formed an infinite rectangle of umbrellas from Fulton to Willoughby and back. For as long as I visited the pop-up, which was just under two hours, I never witnessed a true beginning or end of the line: just hundreds of gloriously happy people, either hyped up by the on-site DJs and emcees or cheering on those who emerged with an armful of multi-chromatic purchases.

With no official flagship announcements yet, Clemens’ choice to host one his largest events yet at Rainbow Shops, a pillar of grab-and-go fashion since its founding in New York back in 1935, goes much deeper than the neighborhood’s easy transit access.

“I used to shop for my little outfits at Rainbow all the time,” said on-site Telfar emcee Selyna Brillare. A close collaborator with Clemens for both hosting roles and voiceover work with the brand, Brillare praised the partnership. “As a young Black and Latina girl, Rainbow was where I saw people like me. It was for all of us,” she said. Those sentiments were echoed by Christina Cajina, a tax auditor who traveled all the way from Jersey City to attend the pop-up. “Rainbow has always been in mine and my family’s life,” she said. “I’m shopping for my daughter, who is in dance class right now!”

The event was a block party, with foghorns, guest appearances, and live musical performances. Attendees made every use of the experience: Chris Alexander traveled from Queens and bought five bags – four for his friends and one for himself. Hairstylist Nijah Torii traveled from eastern Brooklyn and handed out business cards while in line. Already an owner of Small and Medium Red Telfar totes, Nijah was multitasking: “A lot of people out here are trying to get bags, but I’m trying to get the real bags at the same time.”

Placing the pop-up in Downtown Brooklyn, at Rainbow, was a signal for Clemens’ truest and bluest of supporters. It’s a bulletin to the shoppers willing to engage with the origins of not just the CFDA-winning designer’s fashion perspective, but that of his Black and brown predecessors. Even as his signature accessory quickly became an It Bag, holding a fashion week pop-up at Rainbow is a love letter to the customer that first popularized “the Bushwick Birkin” that says: this is for you. Between the physical resonance of Rainbow and the virtual scale of Telfar, Clemens’ famous 'not for you — for everyone’ mission becomes fully realized.

What’s clear is Rainbow and Telfar’s shared affinity with Black and brown consumers: Clemens, who has amassed a loyal community around his work, including the likes of Beyoncé, designed for ten years before the mainstream fashion industry decided to take notice. With Guess dropping their Telfar-imitation logo tote last year to fast-fashion brands like FashionNova selling items found at Rainbow for an upticked price, they also share an audience of white shoppers possessing a desire for proximity to “coolness” as often shaped by Black culture, no matter the cost.

For Rainbow, their “everyday low prices” influence precedes the industry we know as “fast fashion” today. The brand gained footing within strip and shopping malls, building over 1,000 locations and holding its own next to mall-first stores like Forever 21 and Wet Seal in the mid-2000s. However, where their competitors launched online shopping at the outset, Rainbow stalled in its transition to the digital age, only launching eCommerce in 2012. By that time, online-first retailers like Shein, Boohoo, and ASOS were on their heels, snagging Rainbow’s target consumer before they even left the house. They’re still a key player, with a currently $1.5 billion estimated revenue, but the distance between their brick-and-mortar spaces and their online presence remained palpable.

Which made Clemens, a New York-native whose high school is next to the Rainbow Shops in Queens’ Rego Center, a perfect conduit. For decades, the fashion industry erected barriers between consumers — notably Black and brown ones — and their definition of “luxury.” By digitally gamifying the “drop model” and maintaining a reasonable price per item, Clemens’ shopping experience actively worked to dismantle those barriers.

Now that shoppers are returning to IRL stores, online-first retailers are scrambling to win on both sides of the Add to Cart experience. ASOS made its physical store debut at Nordstrom earlier this year, SHEIN has doubled down on pop-ups in New York, and Garage just opened their first flagship store in SoHo: especially on Rainbow’s home turf of NYC, the brand now seems to have double the chance of mainstream resurrection.

As for Telfar, Clemens made a special announcement at 6:30pm on Sunday, capping off the blowout event with news that all bags, in every color, will be available for purchase online, starting September 23rd. Extending the Rainbow experience into the digital realm, Clemens is letting go of the “drop model,” a tactic that certainly built buzz and served to amplify his hard work. However, with this announcement, it’s clear that Clemens always knew “drops” would be temporary. Soon, Clemens will have accomplished his dream of breaking the final chain on the fence of fashion, not just through Telfar but hopefully forever forward.

NEXT UP
Entertainment
Mariah Carey, Xtina, Missy Elliott To Play Lovers & Friends Fest 2023
Entertainment
Hawa Has Her D'Angelo Moment In Playful "Actually" Video
Fashion
Telfar Thinks You Need An It Wallet To Go With Your It Bag
Fashion
The Wildest Front-Row Looks From Couture Week In Paris
Style + Culture, delivered straight to your inbox.