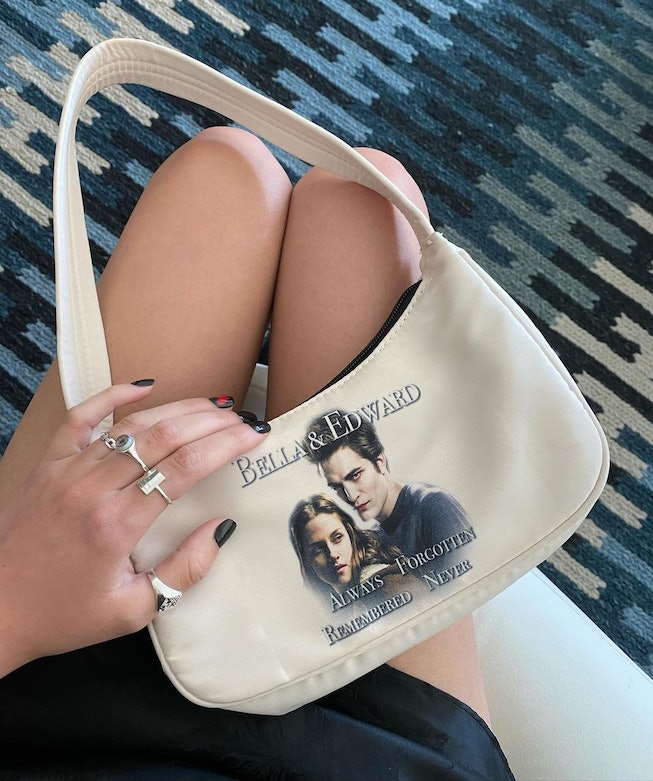 If you still have a Team Edward shirt or any other Twilight merch buried deep in the back of your closet in your childhood bedroom, now is the time to dig that baby out. The Twilight Saga renaissance is upon us, thanks in part to the franchise streaming on Netflix, last year’s release of the long-awaited Midnight Sun (a retelling of the first Twilight book but from Edward’s POV), and maybe, most importantly, Olivia Rodrigo’s reveal as a passionate Twihard. Stars, they’re just like us!

It’s been 13 years since the first Twilight movie came out, and so many of us are still waxing nostalgic about Edward’s sparkle and dreaming of taking a trip to Forks. (Though, some of us are thirsting more for Charlie Swan than Edward these days). The only natural step is to take a cue from Rodrigo and sport some Twilight-themed goodies of our own.

Over on Twitter, there is a serious call for Twilight merchandise (Summit Entertainment, you better be listening!). Sellers on Mercari and Depop are taking advantage of the craze by selling old tees and other licensed merch for hundreds of dollars. Thankfully, there are more affordable options to show off your unwavering love for what some may call... the greatest love story ever told. You can find original merch if you search on Amazon and eBay, but Etsy has the best assortment of Twilight bootlegs right now, hands down.

Ahead, 19 of the best Twilight-inspired merch to shop right now.

I Think The Twilight Movies are AWESOME
Buggirl200

Olivia Rodrigo wore this incredible T-shirt on her Instagram in August. It spells out everything that has been on our mind the past 13 years.

Another hilarious Twilight find owned by Ms. Rodrigo? This Praying handbag that depicts our favorite lion and lamb...

Praying actually has a few Twilight-themed items to choose from, like this super cute tennis skirt.

Another genius – and highly relatable — shirt from Buggirl200. Wonder if Olivia Rodrigo has this one, as well?

Bella Where Have You Been Loca T-Shirt
Heiment1989

Jacob’s iconic quote is FINALLY getting the love it deserves.

Where The Hell Have You Been Loca? Tote Bag
Nort2

Better yet, carry all of your Twilight books in this “loca” tote bag.

The most romantic set of words in the English language.

Why yes, that IS a Twilight-themed tarot deck!!!

Show your appreciation for Bella’s vintage ride with this embroidered sweatshirt.

Halloween is almost here, so it’s a good time to start working on your Bella Swan cosplay. Snag this replica of the bowling shirt she wears on the first day of school.

Speaking of replicas, if you’ve ever fantasized about owning an engagement ring like Bella’s, there are versions out there for practically every kind of budget.

If you’ve ever woken up in the middle of the night with Eric’s voice in your head saying “La Push, baby. It's La Push,” you’ll appreciate this sticker.

If you prefer a shirt that looks more like the official merch of yore, there are plenty of those available, too.

This needs to be a full-fledged perfume.

Because vampire daddy Carlisle needs some love, too! This comes in a T-shirt and hoodie version, as well. (There are also tees for Charlie and Billy since you’re probably wondering.)

Let Alice (or any of the Twilight characters for that matter) freshen up your car and protect you from the Volturi.

Stick this on your stupid, shiny Volvo!

Staying in and coloring this book might be the best way to spend a rainy day (aside from watching The Twilight Saga, of course).

Maybe the most deranged mash-up T-shirt you’ll ever see.