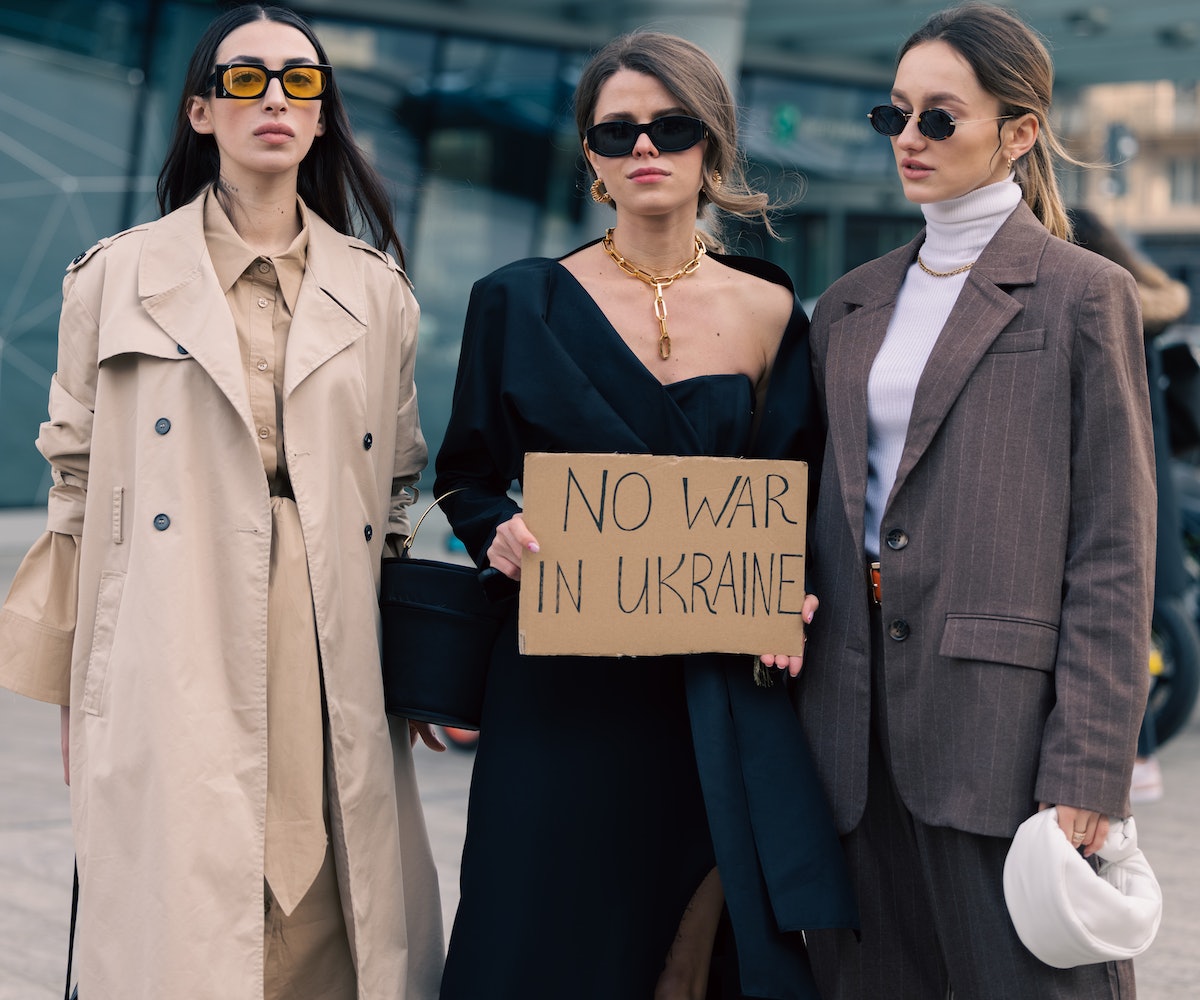 Style blogger Poly Kyrychenko’s first-ever fashion week in Milan came to a screeching halt on Thursday, Feb. 24, when her native Ukraine was invaded by Russia. “It was the worst morning of my life,” she recalls to NYLON. “I woke up to calls from relatives at home. There was panic. I couldn’t believe that the war had started.”

Home for Kyrychenko is the country’s capital Kyiv, where she lives with her husband and four-year-old son. Though tensions between Ukraine and Russia were building ahead of Milan Fashion Week, Kyrychenko chose to attend since her work involves promoting Ukrainian brands, and that included wearing designer looks from the country as she went from show to show. But with her home under attack, she wanted to send a bigger message beyond just clothes. “I started looking for the Ukrainian flag at 5 a.m., but I didn’t find it, so I made a sign,” recalls Kyrychenko, who was photographed outside of the Max Mara show on Thursday morning holding a piece of cardboard saying “No War In Ukraine.” “My hands were shaking and when [the photos were done being taken], tears poured down like hail. This is the only thing that can be done while I’m here.”

That moment marked Kyrychenko’s first time being street style snapped, and as the day’s shows went on, she noticed others using street style to showcase their support and spread awareness for Ukraine. “At Max Mara, I was the only one with a sign,” Kyrychenko says. “Then more Ukrainian influencers came out to Prada with the same action. We could no longer restrain ourselves. It was very difficult, tears flowed right in front of the cameras, people came up and hugged us.”

Later that day at Prada, Kyrychenko, who now had the Ukrainian flag drawn on her hand, was joined by Olga Boncheva, a Ukrainian upcycling designer behind Oversized and fashion influencer Nastya Burlaka. Alina Frendiy and Tatyana Kodzayeva arrived to the show carrying the country’s flag together. A crowd gathered around another group of influencers, dressed in all-black outfits, holding their own “No War In Ukraine” sign.

“The feelings are disgusting, you experience fear, anger, and tears,” recalls Burlaka when she first received a phone call about the bombings from her husband in Ukraine that early morning. “We gathered with Ukrainian bloggers and decided to tell the world about it. It was decided to come to street style with the Ukrainian flag and tell the public about it.”

Anti-Putin protesters also arrived outside of the shows during the rest of Milan Fashion Week, including at the venues for Gucci, Versace, and Giorgio Armani, who decided to present his runway collection in silence as a sign of respect towards Ukraine. On Wednesday, March 2, Gucci announced its Chime For Change campaign will be donating $500,000 to UNHCR, the UN Refugee Agency, to help provide emergency support for Ukrainian refugees. The day before, Donatella Versace made a donation to the same organization, and urged her followers on Instagram to do the same.

Attention towards the Ukraine-Russia conflict was brought to the industry’s attention during New York Fashion Week, too. Svitlana Bevza, who presented her namesake label’s Fall 2022 collection on Feb. 14, closed her runway show with a projection of the Ukrainian flag illuminating above the catwalk. Shortly after, she flew back to her hometown of Kyiv where she has remained with her husband, two children, mother, and mother-in-law. “There are people who are leaving for Lviv and to western Ukraine, but I am not sure that it is super safe to drive on the road,” Bevza told Vogue.com in an interview. “My family is here. My kids are here. We made the decision to stay here.”

As Paris Fashion Week goes on, showgoers are still bringing attention to Ukraine, especially through street style. Beka Gvishiani of the fashion news Instagram account StyleNotCom has been seen wearing a pin with the colors of the Ukrainian flag, as well as reporting on shows that have also expressed their support. Christelle Kocher of Koché, for example, wore blue and yellow flower pins during her runway show finale bow on March 1. Balenciaga, which will present its Fall 2022 collection on March 6, has wiped its entire Instagram page, save for a single post of the Ukrainian flag with a caption that reads: “We stand for peace and donated to WFP to support first humanitarian help for Ukrainian refugees. We will open our platforms in the next days to report and relay the information around the situation in Ukraine. Follow the link in bio to donate now.”

While some influencers who originally arrived with Kyrychenko to fashion week traveled back to Ukraine by car to be with their families, she decided to stay in Milan but not attend anymore events. Other influencers did the same, like Frendiy, who was also attending Milan Fashion Week for the first time but has spent her stay attending protests and rallies rather than runway shows. “After the news there was no mood to attend any shows,” says Burlaka, who is now based in Moldova, a country bordered between Romania and Ukraine.

“Now is definitely not the time for outfits,” says Kyrychenko. She’s currently reunited with her son in Italy while her mom and her sister with a six-month-old baby and a dog are in Germany. Her husband is still at home in Ukraine. “I hope that we will meet some day.”

Ukraine is still under Russian attack and invasion since Thursday, Feb. 24. Please consider donating to the following organizations to show your support:

To stay informed on what is happening in Ukraine, follow the Minister of Foreign Affairs of Ukraine Dmytro Kuleba on Twitter.