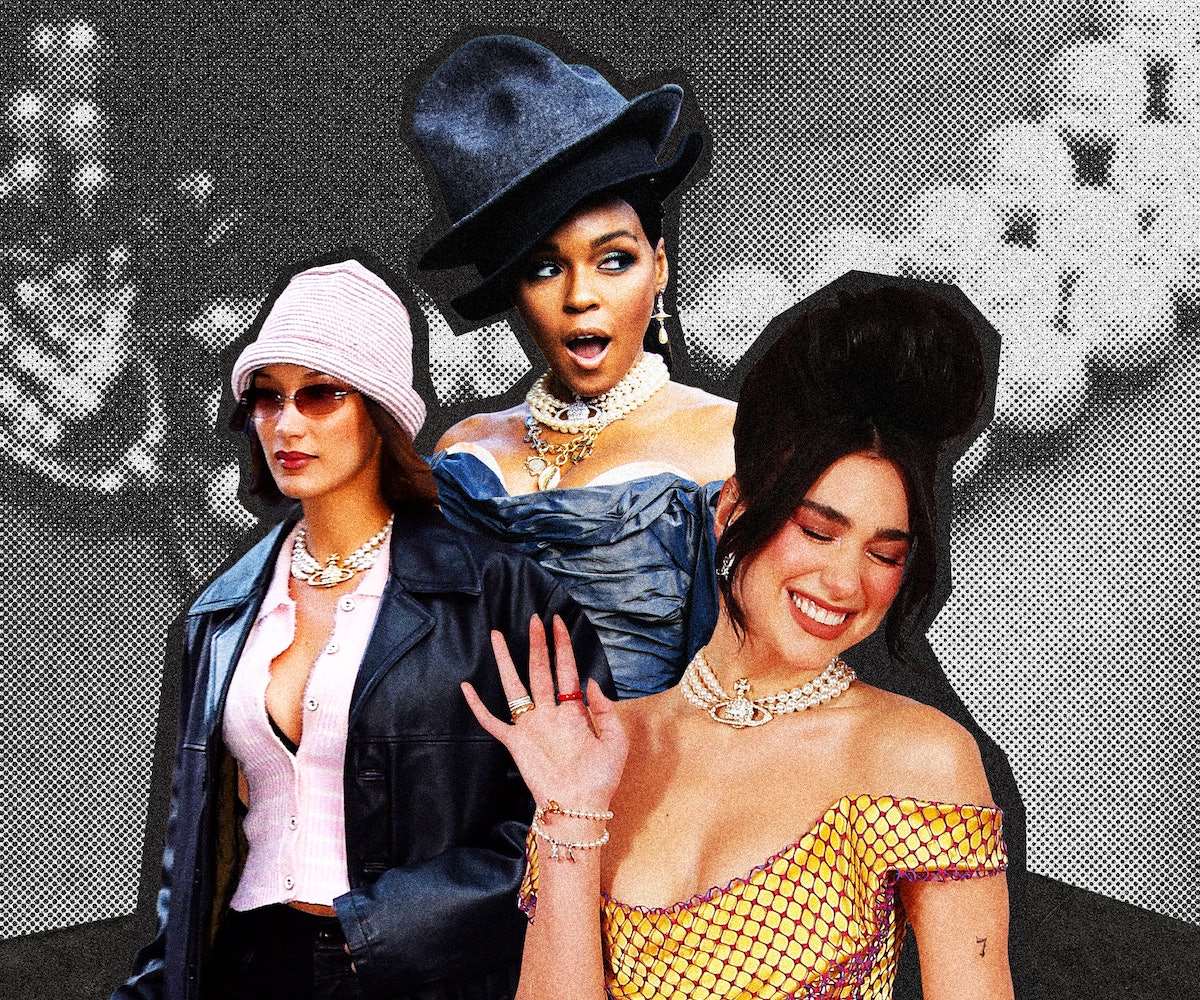 If the Tiffany & Co. charm necklace dominated the 2000s and the Cartier Love bracelet ruled the 2010s, then the 2020s has found its answer to the “It” girl accessory in the Vivienne Westwood Mini Bas Relief pearl choker. Though the choker — which has been making its rounds on the necks of TikTokers, models, influencers, and pop stars alike — may be today’s newest coveted accessory, its history (and comeback) has surprising ties to both counterculture and anime.

While the Swarovski crystal-encrusted orb nestled among a string of delicate pearls may not scream “rebellion,” Dame Vivienne Westwood has long catered to the underground. In the early 1970s, Westwood and partner Malcolm McLaren were fully involved in the punk scene, which was reflected in their provocative designs rife with fetishwear and head-turning slogans. The two became frequent collaborators with the Sex Pistols, who got their start out of Westwood and McLaren’s shop Sex. But by the late ’70s, as the group disbanded and the punk movement was swept up into the zeitgeist, the designer renamed her boutique World’s End and sought out new subversive muses.

Around a decade later, following her split from McLaren, Westwood once again pivoted her inspiration, this time landing on upper class British society. True to the brand’s ethos of rebelliousness and anarchism, Westwood flipped the script, parodying the fabrics, cuts, and colors of the upper echelons’ aesthetics.

One piece in the collection was the Deep Sky jumper, a knit sweater emblazoned with the Sovereign’s Orb, which she imagined Prince Charles might wear. Westwood, who took a particular interest in the cosmos, added a ring of Saturn to the orb, creating a link between the traditional and the futuristic. The new symbol has become a signature of Westwood’s brand identity, and the orb has appeared in every collection since. Its jewelry debut as a pendant arrived in the late ’80s, specially Westwood’s Harris Tweed Fall 1987 runway collection.

And while fashion fans may have always had Westwood’s orb jewelry on their radars, its present-day resurgence could actually come from an unexpected source: anime. Thanks to its recent exponential growth in popularity, and the unprecedented amount of free time during the COVID-19 pandemic, young Americans are consuming anime at record rates. The manga Nana, which was adapted into an anime series from 2006 to 2007, paid heavy homage to Westwood; its author, Ai Yazawa, was a former fashion student who admired the British designer’s punk roots. Nana’s cult following has spawned a craze for Westwood’s orb jewelry, as it is often directly mentioned in the series. During the mid-2000s, Westwood also took advantage of the fanfare and aligned her brand with Nana in advertisements featured in Japanese punk magazine KERA.

The e-girl aesthetic, which borrows heavily from Japanese culture, plays a role in the piqued cultural interest in anime and punk music. “At the core of being punk is the distrust of the establishment and the need to self-express. The e-look is an interpretation of a 40-plus-year-old aesthetic but made modern for our times,” says Johnny Valencia, owner and curator of Pechuga Vintage. “The wild makeup, the element of DIY, the holes, the brightly colored hair are present in punk and in e-girl and e-boy looks.” Today, the allegiance to a subculture is not just expressed in person but also online. Thanks to the meticulous TikTok algorithm, it was only a matter of time before videos connecting the e-aesthetic to Westwood began making the rounds on the social media platform — some of which have even gone viral. One popular sound refers to Nana’s favorite things (“Vivienne Westwood, the Sex Pistols, Seven Star cigarettes, coffee with milk and strawberry cake, and lotus flowers”) which often scores videos of users unboxing Westwood jewelry.

Anime fans aren’t the only ones flocking to Westwood. The Bridgerton-inspired royalcore trend, which calls back to Westwood’s parody of the upper class in the late ’80s, has led celebrities, such as Bella Hadid, FKA Twigs, and Rowan Blanchard to invest in the designer’s vintage corsets. For Valencia, there is no question why Westwood is today’s hottest designer: “It's simply that there's just nothing else like it on the market. Vivienne's designs were not fully embraced in her native country when she was making them; she was too ahead of her time. The cinched waist, the sexiness, the satire — she's perfect for 2021.”

Valencia, who boasts a large collection of vintage Westwood and an even larger celebrity clientele, contends that he is partially responsible for the rise of the trend. “Three years ago no one was really interested in selling vintage Westwood, and that's when I seized the opportunity,” he says. “Every time I would get a request from a stylist for one of their clients, I would be sure to suggest a Vivienne Westwood piece; to complement it, I would suggest they give the orb chokers or brooches a try. The look was a hit every time.”

Like Westwood’s Nana collectible items, which go for well over $2,000 on the resale market, her vintage corsets are not within the budgets of most Gen Z-ers, especially as they have increased tenfold in price over the past few years. Hence, the emphasis on jewelry, which is often a slightly more wallet-friendly gateway into the world of designer goods.

It’s not just average young people investing in Westwood’s necklaces. Her decadent Three-Row Bas Relief pearl choker has been spotted on Dua Lipa and Bella Hadid, while Madison Beer helped popularize the more ubiquitous Mini Bas Relief pearl choker. (The mini choker has become wildly popular to the point where Westwood has not only sold out but also inspired a multitude of fast-fashion dupes.)

Westwood’s dominance today makes perfect sense. Her parody of upper class aesthetics in conjunction with her punk ethos has become a middle ground for a host of subcultures. Whether buyers are attracted to the pearl choker because of its ties to Bridgerton, Nana, or the Sex Pistols — or simply because they saw it on TikTok — every wearer proudly displays a piece of the revolution on their necks.

NEXT UP
Fashion
Telfar Thinks You Need An It Wallet To Go With Your It Bag
Fashion
R&B Artist María Isabel Is Making Room For New Style With Nuuly
Fashion
The Best Celebrity Fit Pics From Paris Men’s Fashion Week
Culture
Loewe’s Howl's Moving Castle Collection Is An Anime Dream
Style + Culture, delivered straight to your inbox.