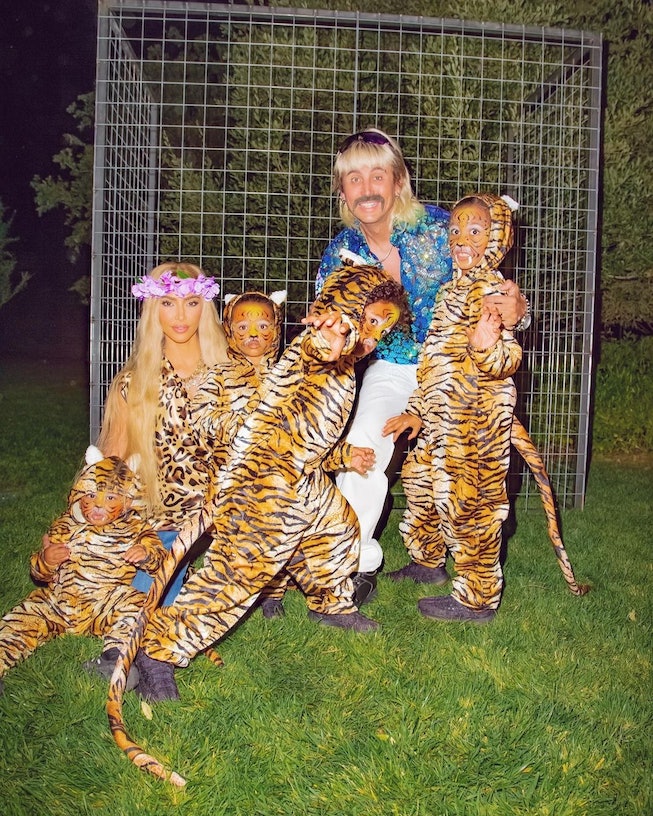 Halloween was not the usual party it's been in years past, but that didn't stop celebrities from giving it their all when it came to costumes. While many stayed indoors and hung out with their close circle of friends, people like Lizzo, Kim Kardashian, Cardi B, and Janelle Monáe still put in some serious effort to deliver costumes worthy of a year without a pandemic. (And then there was Kendall Jenner, who through herself a raging 25th birthday party packed with a guest list of over a hundred boldfaced names.)

Tiger King is apparently still going strong in the Kardashian West household, as Kim and her friend Jonathan Cheben put on their best Carole Baskin and Joe Exotic looks, while her kids all dressed up like tigers (face paint included). Others got a bit more creative with their pop culture references, with Lizzo dressing up in a blue, water-printed catsuit for her costume as a literal WAP.

Some chose to stick to simpler options, like Emma Chamberlain's Coraline costume, which included a blue wig, yellow jacket, and striped crop top, while the women of Blackpink went as sailors.

Check out the best celebrity Halloween costumes of 2020, below.

Ciara as Cardi B (and Baby Future as Offset)

Cardi B as Medusa

Kaia Gerber and Jacob Elordi as Elvis and Priscilla Presley

Lizzo as a WAP

Janelle Monáe as the debate fly

The Weeknd as the Nutty Professor