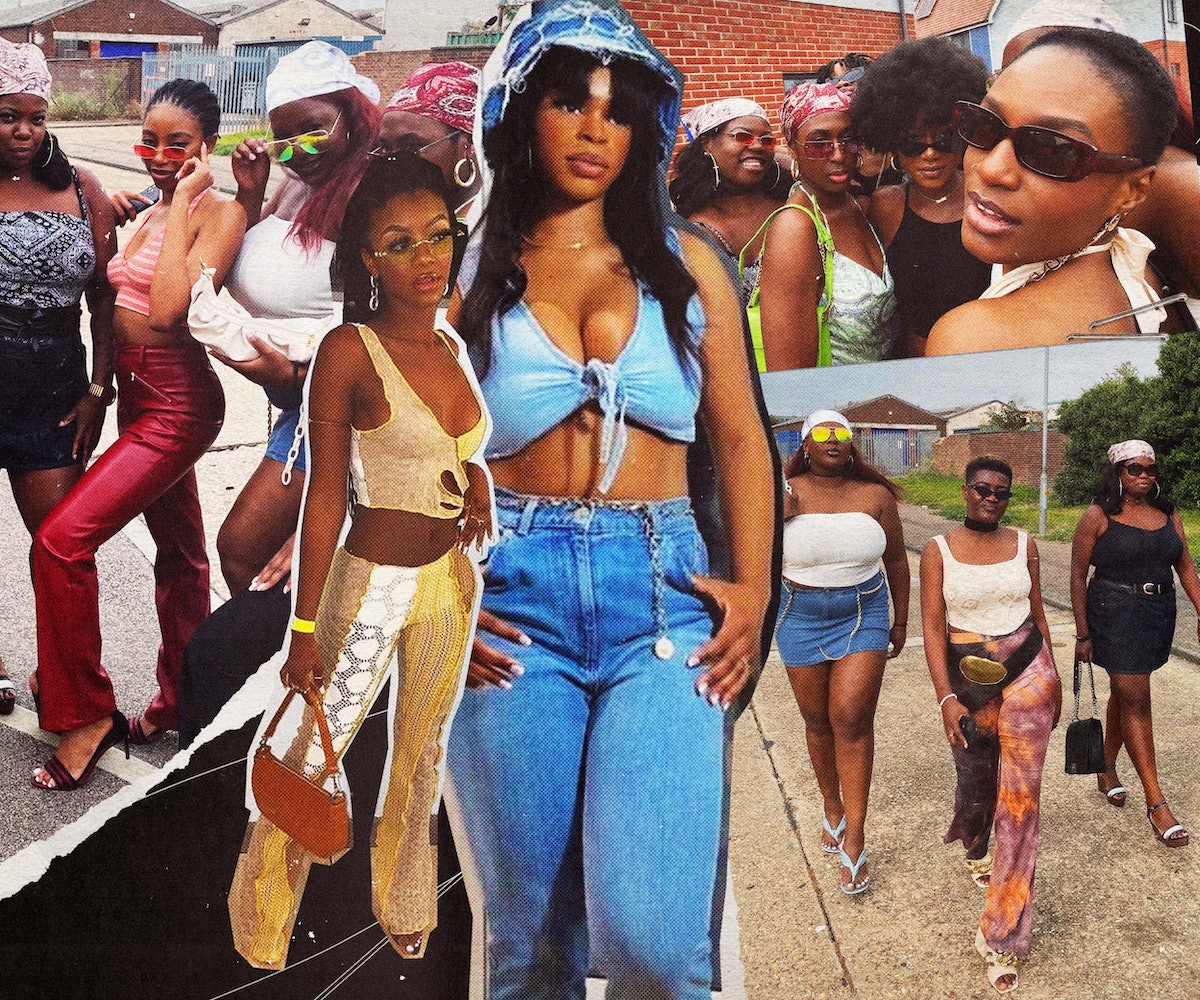 When Nigeria’s movie industry — now called Nollywood — released its first few direct-to-video films, including Living in Bondage and Billionaires Club, this format became the country’s dominant source of entertainment in the late 1990s and early 2000s. Its impact led to subsequent films, like Beautiful Faces, Abuja Connection, Girls Cot, and more, all of which came under quick criticism. They were considered mediocre for their craft; the acting was looked down on for being over the top, and the writing was criticized for being lazy. It was trendy to hate on the industry as a whole and very few people were willing to share to the public that they enjoyed watching such movies.

However, today, young millennials and Gen Zers are identifying with early-aughts Nollywood, proudly and loudly, both within Nigeria and in the diaspora. They’re sharing memes made from old film stills across social media, recreating iconic scenes, and switching up their personal style inspired by the era’s glamorous characters. Some are even throwing Y2K Nollywood-themed parties.

This resurgence back into mainstream pop culture amongst Nigerians, as well as the change in attitudes, can easily be tracked to Instagram archive accounts @nolly.babes, @yung.nollywood, and more, which post stills and short clips from old Nigerian films. This often leads to the memefication of these movies, such as The President’s Daughter and Abuja Connection, which often go viral on social media and trigger both nostalgia and an appreciation for their style.

‘‘I think because Nollywood is heavily seasoned with the Y2K aesthetic, it matched the resurgence of trends from the early 2000s,” the administrator behind @young.nollywood tells NYLON. ‘‘Also, it’s being presented to this generation in a style they understand and enjoy. It’s flashy, it’s glamorous, it’s urban, it’s daring, it’s youthful. Wouldn’t you want to be all these things?’’

The style behind The President’s Daughter and Girls Cot have served as outfit inspiration, as have Nollywood actors Regina Askia, Genevieve Nnaji, Rita Dominic, and Jim Iyke, who were popular for often playing the femme fatale or “bad boy.” They also feature some of the best looks to come out of Nigerian television and have now become elevated to fashion-icon status. Similarly, the party scenes from these movies have inspired a slew of themed parties today, where the hosts and attendees attempt to recreate them through fashion. Guys sport baggy jeans with a sleeveless shirt or an oversized blazer, while girls dress up in short denim skirts, strappy gowns, or denim bell-bottom pants. The throwback aesthetic is recognizable and distinct, from the music played at these events and the outfits to the makeup and the wigs.

It’s easy to see why people find joy in channeling this throwback era of Nigerian pop culture. The first to throw a Y2K Nollywood-themed party were the sisters who co-own and co-run @nolly.babes in Lagos, Nigeria, during December 2019. Speaking to NYLON over the phone from New York, Tochi Anueyiagu shares the inspiration behind the party: ‘‘We knew from day one that we wanted to host a Nollywood themed-party; I’ve had the ideas for the name of the drinks in my head for years,” she recalls. “At the party, we had Genny Colada, Margarita Dominic, and stuff like that.” (The names of the drinks are inspired by two of the biggest actors in Nollywood — Genevieve Nnaji and Rita Dominic, respectively.)

“And for us,” adds Anueyiagu, “it wasn't just throwing a party and saying it’s Nollywood inspired. It was very specific and very dear to our hearts, and we wanted everything to be accurate and perfect, from the DJs’ playlist to the projection of different clips from Nollywood movies, which we had going on the wall, and so much more.’’

This trend of Nollywood-inspired parties is now viral not just in Nigeria but in the United States, Canada, and pretty much anywhere that a Nigerian community can be found. Many attendees take to social media to show the success behind their themed parties, as attendees are often dressed in outfits inspired by characters from ’90s-era and early-aughts Nigerian movies — bucket hats, a thin long brow, camisole tops, to name just a few examples. A viral TikTok video posted by @joyalexo, captioned with “Nollywood Y2K parties are a vibe,” currently has more than 35,000 views and shows several young people dressed in typical old Nollywood fashion set to the sound of “Gongo Aso” by Nigerian artist 9ice, a song that’s often used in Nollywood movie party scenes from the early 2000s.

‘‘For a very long time, I’ve always wanted to throw a Nollywood-themed party because, coming from a Nigerian family, we used to always watch Nollywood movies at home. You never hear enough of the old Afrobeats when you typically go out, so it was good to have a night of purely that,” Nicole Ezeudo, the host of the party featured in that TikTok video, tells NYLON. ‘‘Within the first two days of releasing tickets, we sold out 50% of them, so it was clear to see that a lot of people wanted this sort of event, too. It was a great turnout as well because we not only ended up selling out the tickets, but also everyone stuck to the theme and dress code’’

Similarly to Ezeudo, Nwachukwu Nwalozie posted a clip of a Nollywood-inspired party he had hosted in Toronto on his TikTok account @zum0n, which now has more than 22,000 views. ‘‘During the peak of the pandemic, a variety of old Nollywood memes began to go viral on several social media platforms,’’ recalls Nwalozie. ‘‘The attention the trend garnered inspired Nigerians in the diaspora to celebrate the pop culture most of us grew up on. Party organizers began to throw Nollywood-themed parties to revive the aesthetics of the early-2000 films and celebrate the fashion styles of the actors and characters. My team and I wanted to create a unique but relatable experience that would celebrate our local cinematic past in a way people can enjoy, so we hosted the party.’’

For attendees of these parties, like Odion Akhetuamhen, the high point of being there is the nostalgia. “It was insane,’’ Akhetuamhen tells NYLON. ‘‘It was exhilarating seeing people channeling their inner Rita Dominic, Genevieve, Jim Iyke, etc. The DJ played old P-Square music, songs by Plantashun Boiz, Mo Hits, and other acts that were popular in 2000s.’’

Stepping into the space dressed as a character from a beloved movie into a party filled with other people paying equal homage is a magical and thrilling party experience. This is especially true for Nigerians who grew up in a country where events like Halloween or Comic Con may not celebrate all aspects of pop culture, as well as bask in the nostalgia of it all. Y2K fashion is without a doubt making a global comeback, too, from inspiring Olivia Rodrigo’s music videos to fashion runways and TikTok. However, for young Nigerians, it’s more than just a quirky trend. Rather, it’s a way to explore a pivotal moment in Nigeria’s pop culture history and help them feel more connected to their roots.

NEXT UP
Culture
Caroline Polachek In KNWLS & More Party Photos You Missed
Culture
On The List (With Melissa Rich): How To Throw The Ultimate Apartment Party
Fashion
Target’s Future Collective Gets Buoyant With Gabriella Karefa-Johnson
Culture
Loewe’s Howl's Moving Castle Collection Is An Anime Dream
Style + Culture, delivered straight to your inbox.