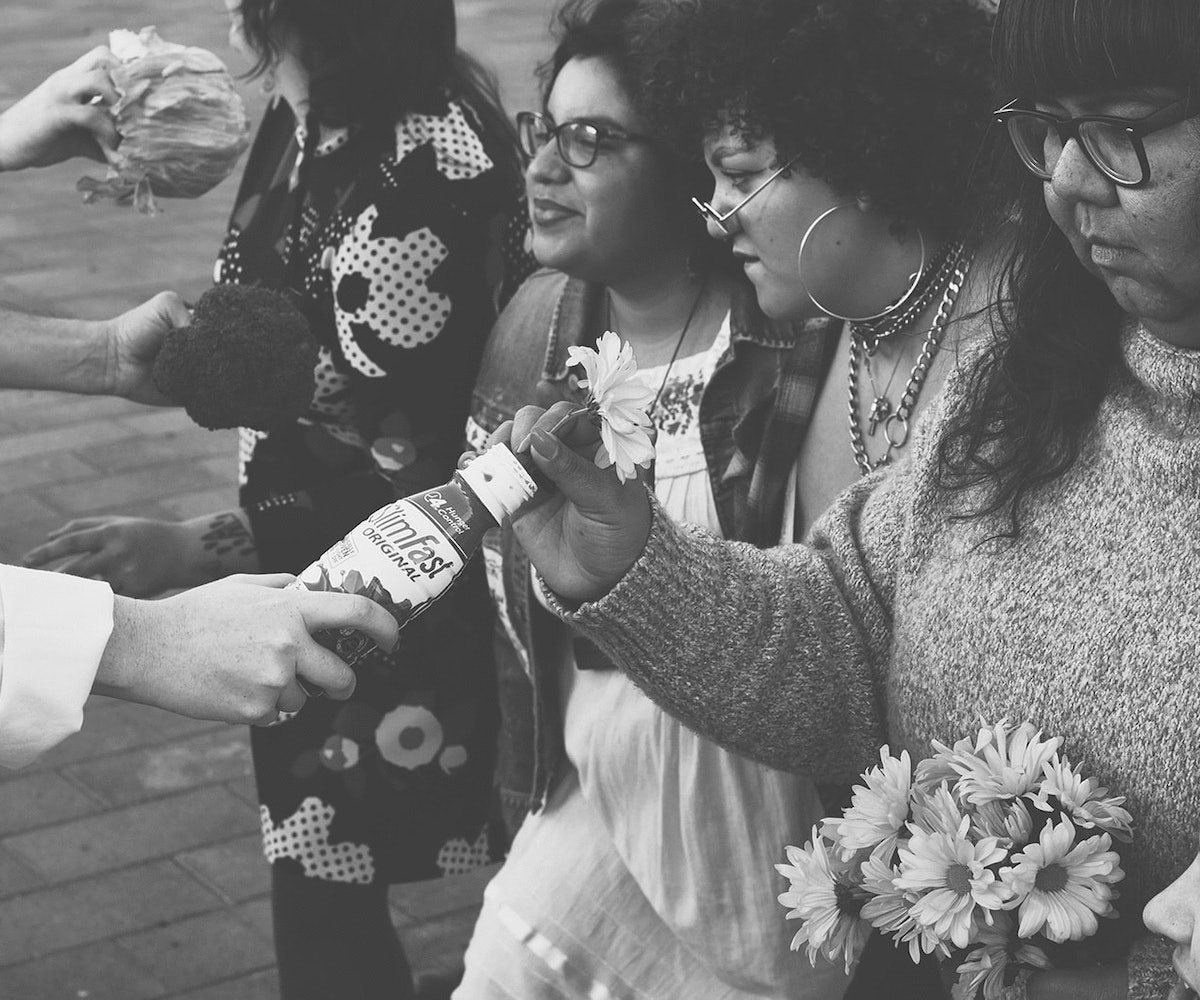 If any one thing has shaped my life above all others, it is the fact that I have always been fat. By age five I had learned that my body was a sign of immorality and ugliness. I saw nothing on television shows or in movies to disprove this. Even clothing companies didn't make anything in my size. So I accepted that my fate was to hate my body. Many years of food restriction, hunger, illness, and obsessive exercise followed. I did everything I could think of to become thin, but nothing worked.

My body size never really changed, but something else did: In my late 20s, I was introduced to fat activism. My mentors taught me important lessons: Fat isn't considered bad in every part of the world; beauty and sexiness come in all sizes; and fatphobia is the problem—not me. They taught me that I could and should fight for a world where every person can live a life free from bigotry and discrimination regardless of size. They taught me how to put myself back together, piece by piece, reconstruction after the cataclysm.

In 2018 I had the idea for recreating an iconic Vietnam War-era photograph, "Flower Power," but with a focus on a different war: diet culture's war on women's bodies. Diet culture—the inescapable behavioral paradigm we live with in the West that normalizes food restriction and values thinness above actual health—uniquely maps onto sexism because women have been historically taught that having a small body is a way to secure resources that have systematically been denied to us on the basis of our gender. Because fat women are used as cautionary tales and scapegoats, we absorb some of the greatest negative impacts of diet culture.

The original image from 1967 shows a protester placing a flower into the barrel of a rifle during the March on The Pentagon. The photo is striking in its contrast: the calm expression of the young man against the wall of soldiers, and the single flower's symbolism of love in the face of imminent threat. In that image, I saw the story of diet culture's war against my body. In that young man, I saw the fat women I know who have themselves chosen to use love—self-love—as the antidote to the cultural onslaught of hatred and dehumanization.

Almost 51 years later to the day I collaborated with fat-positive photographer Zohn Mandel. We met a group of plus-size women in a public square in Santa Rosa, California. Instead of a gun, we used diet products and foods that we had been pressured to consume for weight loss.

The day of the shoot was like a snapshot of all the things we were trying to address with the project. I picked up my friend Bayley, one of the models, and we did the hour-long drive from San Francisco to Santa Rosa in my gold Ford Thunderbird. On the way up we talked about dating, tarot, and the mandatory snacks we were going to pick up at the grocery store. I wanted a campy-yet-elevated menu, an homage to the foods we'd been taught we weren't allowed to have because we're fat: puffy Cheetos, Quadratini, Nutella, chicken wings. Food has always been an important part of the fat activist gatherings I've attended. It's part reclamation, part self-care, and part fuck-you. When you grow up fat, you are often made to feel ashamed when you eat, and sometimes food is overtly kept from you. A lot of fat people have food trauma. So when we gather and have foods that are considered "naughty" or rich, we say to each other, "You deserve the life-altering deliciousness of Nutella as much as anyone else."

Zohn and I had been texting back-and-forth about some of her thin friends who offered to put on lab coats for the shoot and represent the medical industry, which has long pathologized fatness, neglected fat women's health, and that has consistently provided the empirical basis that facilitates the diet industry. I was grateful that they were willing to represent the "bad guys." I also felt awkward that I had to name the dynamic that so often goes unexpressed: Their lives as thin people are different—better and easier—because they don't look like me or Zohn or the fat models.

As we walked from the car into the public square, I felt a familiar fear. We were a group of fat women taking up space (which is our greatest offense, right?). But there was something else. There's a bravado I feel when traveling in a pack of familiars that I can't explain to people who have never been marginalized. The first time I felt it was when I went on the national Sister Spit Tour in 2013. I was traveling in a 15-passenger van full of, primarily, queer women and people of color creatives who looked like weirdos. Night after night we got on stages all over America, sharing work about our lives in the face of a cultural and historical opposition so all-encompassing that it lent gravitas to our every move, like walking through a haunted house except the house is your country. Whenever we'd stop to get a doughnut or gas, we'd descend en masse, tattooed, bare-legged, in insane outfits and dark sunglasses, no smiles blasting Peaches. It was our togetherness that made us feel safe. We were the women that preachers had warned us about. We were all the kind of people who got picked on, but who was gonna fuck with us now, seven-deep?

In the square, the fat "protestors" and thin "doctors" stood in two lines facing each other. The doctors approached us with trepidation. Zohn directed them to wag broccoli and SlimFast in our faces more aggressively. They were hesitant, uncomfortable with the division between us—thin and fat, the revered and the reviled. The fat models—including me—also sensed the division but it's not new to us, and I felt us lean into it, forcing a recognition of an unsettling truth.

As the day wound down, the fat models made it back to Zohn's, and we all piled into a tiny room to change into our regular clothes. There was skin, bellies, arms, thighs, stretch marks, the beautiful and familiar cadence of fat women interacting. As we sat around lying on each other and on pillows, a conversation somehow began about how this moment felt like the sleepover we'd never had. And then one after the other—without prompting—we began to tell stories about the awful things that had happened to us at the real sleepovers we'd gone to growing up. I remembered my last sleepover. I was maybe 10 years old, and I woke up to find soy sauce all over my hair and eyebrows. No one else had any on them. I wanted to shower but was too afraid that the other girls would break into the bathroom, pull back the opaque curtain covered in seashells, and point at my fat body. Like the fat version of that scene in Carrie. When I refused to shower, they taunted me for being dirty.

In that room, though, we talked about how nice it felt to eat and be naked and chafed and tired with people whose bodies looked like ours. Our intimacy filled the silences with sweet, thick comfort.

Zohn told me after the shoot, "Art is love. Art can be action. It's hard to turn anger into love—art. It can feel vulnerable and unfair. It's like when you're fighting with a significant other. Once you actually connect to the hurt, you find the love instead of the anger and resentment you're sitting in. The hurt is where it means something. I felt that recreating this image would feel powerful and it did. Drawing a line with love. Taking no shit. Saying a clear and stern "no" to everyone that has told me and my fat friends and family that they aren't worthy. I have so much anger around the way our culture chooses to portray "healthy" and "beautiful" bodies. The sharp, violent undertone of diet culture and the not-so-subtle fatphobia I experience on a daily basis in the world gives me a choice. Do I swallow it and move on or get angry and burn that fire into action? I choose fire."

On International Women's Day, I think about how diet culture is a war against all women's bodies. The weapons of this war aren't guns or tanks. The weapons are scales, diet products, weight loss surgery, shame. It's fought with selectively chosen data, fat jokes, dirty looks, the refusal to treat fat women's bodies as worthy of care. Dieting has been correlated with eating disorders, anxiety, depression, isolation, a pathological relationship to food, and chronic hunger. These are the tools of war, and they strip our dignity, our humanity, our mental health, our joy, and our right to thrive.

By putting fat women in the center of this image we collectively reimagined history and the possibility of a path toward body liberation and the radical act of self-love. I think Zohn summed up our project best when she told me: "Diet culture: 0, Virgie and Zohn: 1,000."

NEXT UP
Fashion
You Can Now Wear A Keith Haring Piece On Your Wrist, Thanks To Pandora
Fashion
FKA Twigs and Ethel Cain Are Now Miu Miu Models
Fashion
LAPOINTE and JONBOY’s Cute Collab Is An Ode To NYC
Fashion
SHEIN Celebrates National Hispanic Heritage Month In A Big Way