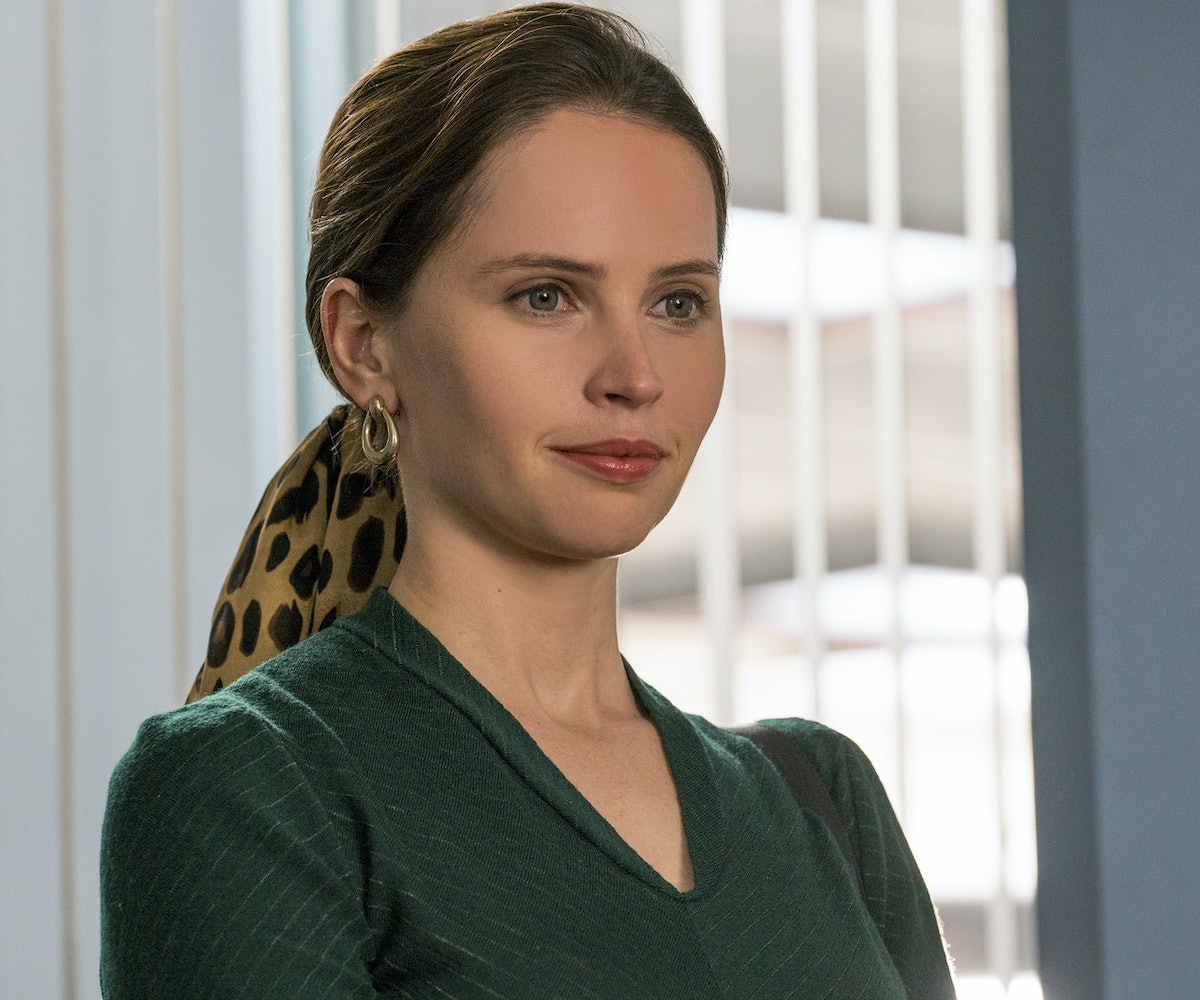 Supreme Court Justice Ruth Bader Ginsburg has sat on the court for over 25 years, having been nominated to her seat by President Bill Clinton in 1993. In the years she's served, she's been a vital voice on issues like LGBTQ and women's rights, the protection of affirmative action, and has been a strong and clear voice of dissent against her conservative colleagues.

Ginsburg's road to the Supreme Court is a fascinating one, and a new biopic, On the Basis of Sex, attempts to explain some of what made Ginsburg into the fiery advocate for women's rights we're all familiar with today. Ginsburg faced challenges because of her gender from the time when she was one of the first female students at Harvard Law School to when she got door after door shut in her face as she attempted to find a job. It's little wonder that sex-based discrimination became the foundation of the career she would build, that would one day lead her to serve on the highest court in the land.

The film stars Felicity Jones as Ginsburg during this pivotal time of the future Supreme Court Justice's life, and Jones embodies Ginsburg with humor, energy, and no small amount of anger toward the injustices of the world. Recently, I spoke with Jones about what it was like to play a living legend, how Ginsburg's anger worked in her fight for equality, and why it was so much fun watching Armie Hammer chop celery.

How familiar were you with Ruth Bader Ginsburg prior to making this film? How did you get involved with this project?

Initially, my mum had been listening to a radio program, and it had been all about Ruth Bader Ginsburg. She said, "I've been listening about this extraordinary woman, this extraordinary lawyer in the U.S." And then I read the script about a year later, and it was all about Ruth Bader Ginsburg, and it was just such a phenomenal script. I had a weekend to read it, and I read it in one sitting and loved it, and was just so excited; and I mean a little nervous to be taking on someone who's so beloved, who I also am actually a huge fan of.

The challenges of playing someone who is both a real icon, but then also still very much alive and active, seems a very singular task where you need to respect the idea of her, but then also treat her very much like the real person she is. Has she seen the film? She's obviously in the film, briefly, but have you had a chance to speak with her about it?

She has been involved in the film. Daniel [Stiepelman, Ginsburg's nephew] started writing it in about 2011 or 2012, and Ruth has been involved in every single draft and given notes. She had seen The Theory of Everything, so she had approved my casting. She has been meticulous in her feedback on the script, so we knew that we had her blessing. I understand that she has been telling her friends to see the film, so she's very pleased with the outcome.

The film shows a very specific time of her life, before she was a Supreme Court Justice. What did you think was the importance of showing this formative period, both when she's going to law school and then realizing she won't really be able to practice law because she's a woman? How does this allow us best to understand what her struggle was?

It's so important to show how angry she was. How, because she felt so much injustice, she was able to argue for those who were also in situations of injustice. I really empathized with her, the feeling of being an outsider; similarly, going onto film sets where you're part of a minority of women, I deeply understood what it felt like to be her, and so that's what I wanted to channel, that frustration with that situation and feeling like you're always on the outside and that you have to behave in a certain way to be respected. And so it was about showing gradually how someone who originally was quite open and hopeful, and how she had to really overcome so much rejection and how, truly, what didn't hurt her made her stronger. And that's why she's such a pop culture icon, because she managed to change the system. She managed to harness that anger and harness it for great good in the world.

That's an interesting point, how effectively she managed to harness her anger, because women are still told now that we're not supposed to be angry, because that will never get us the response that we want. But one of the things that was made so clear was that it was through channeling her frustrations that she was able to effect change. And there's just so many things to be angry about—particularly during the time this film is set. Women couldn't even have credit cards in their own name! Was there anything that you came across while making this film that really shocked you?

She had to be such a fighter to fight against all the expectations of her gender. But also, so did Marty [Ginsburg, Ruth's husband], as well, because there were all these ideas of how they [as a couple] were supposed to behave, because she was a woman and he was a man. And what they showed was that it's total nonsense. And that's what's so powerful about the film: it's about shifting those gender expectations. What's been amazing is seeing how men respond to the film, too, and Marty... as much as Ruth is an icon for women, Marty is an icon for men. And we're definitely encouraging the idea that men can also look after children and be in the home; [we need] to get rid of this outdated idea that that's somehow... that that's unmanly. I think that's what's so important about their relationship, is that they give people such hope that you don't have to conform to these gender stereotypes.

It's a really wonderful example of the importance of men being allies because nobody's going to be able to rise up if people aren't supporting one another and working together. One of my favorite scenes is the one where Armie—as Marty—is just chopping celery for dinner, and he's doing such a good job of it, and I thought, You never see men cooking just a regular weeknight dinner for their families.

Exactly! And exactly as you say, we all rise together, and that's ultimately what is so important about the film, is how when we work together we can be so much stronger. And it is a fight, but when we fight together, then we can effect such great change.

We're coming to the end of 2018, and this has been such an intense year in Hollywood, and in this country, when it comes to women speaking up and trying to expose the many ways that we've been taken advantage of and harassed and more. What does it feel like to be putting this movie out into the world now, as we're fighting as hard as ever for equality, even though we're not there yet?

I feel such great pride in it. I think the story it's telling is so necessary at the moment. And the idea of standing up for your beliefs and having a voice is what's so necessary at the moment, and we don't have to be scared of that. I think what I love about it is that Ruth Bader Ginsburg is someone who has principles and who has integrity. You know, she's not a politician, she's not trying to convince us of falsehoods, she's someone who we can believe in because her entire life, it's been about the good of equality, the good of the country, and not about personal gain. So that's such an important person to be celebrating.

On the Basis of Sex is in theaters December 25.