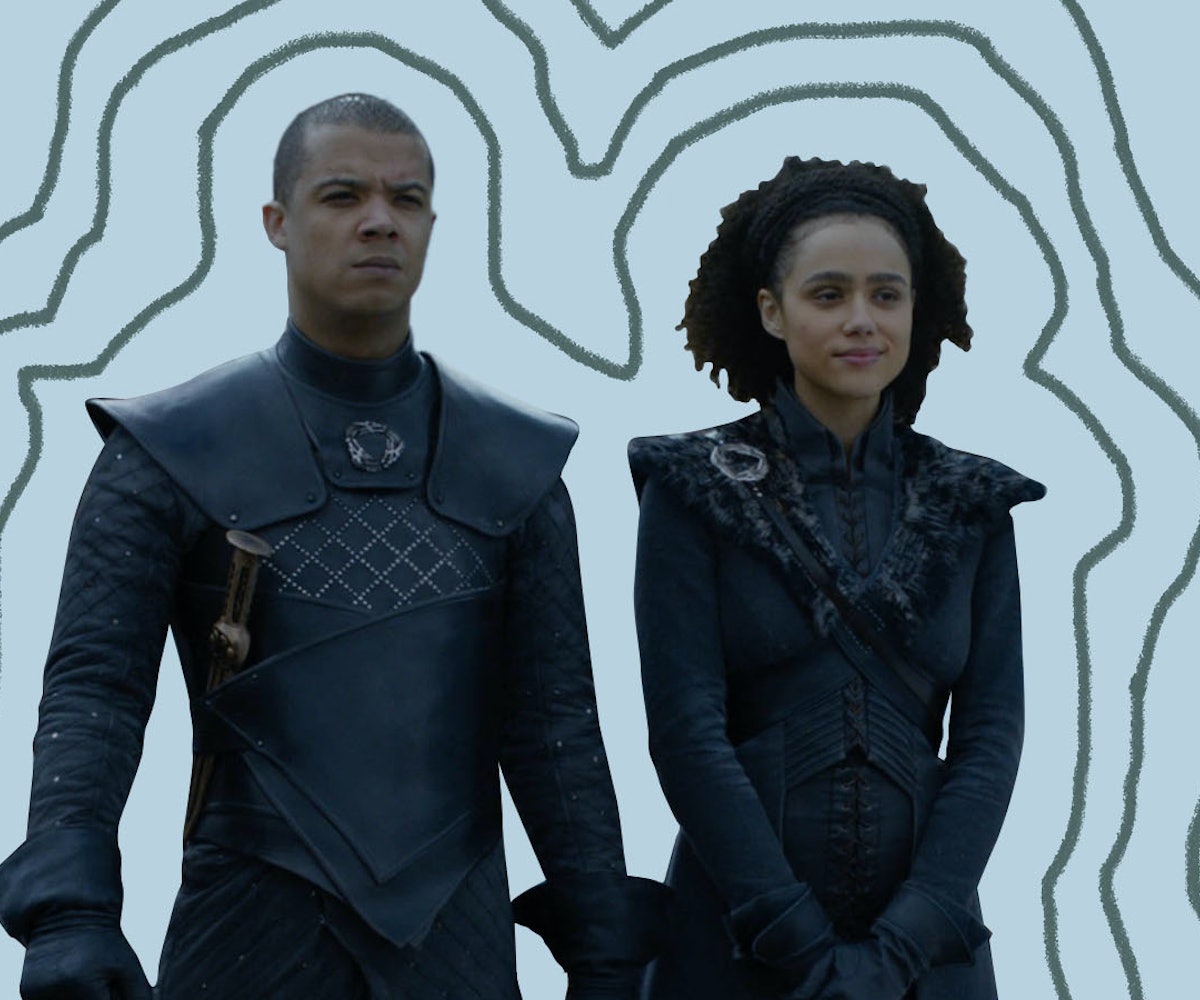 In six days, we'll be at the end of an era. Game of Thrones will air its final episode and, with it, bring an end to the longstanding tradition of live-tweeting the show. In a time when on-demand viewing dominates TV watching patterns, Game of Thrones has proven itself to be an outlier, with millions of die-hard fans tuning in at the same time each Sunday so that they can know what happens as soon as possible. And, Twitter has been the platform upon which fans engage with the zombie- and dragon-filled political drama. And there is no better Twitter subgroup to follow on these nights than Black Twitter, home to the Black Game of Thrones fandom, most easily identified thanks to hashtags like #DemThrones and #ThronesYall.

Black Game of Thrones hashtags are a mix of racial and political commentary (like the one above), gut-busting humor, and unexpected cultural mash-ups. When episodes don't live up to fandoms expectations (*cough* "The Last of the Starks" *cough*), these tweets are sometimes a better payoff than the show itself.

#DemThrones was first dispatched by the trio that hosts the FiyaStarter podcast. It was later popularized by Rod Morrow, who runs the podcast That Black Guy Who Tips, and black Girl Nerd creator Jamie Broadnax; the latter then created #ThronesYall following an online beef about who could actually coined #DemThrones. (You can read all about the somewhat contentious history of #DemThrones here.)

As we close in on the last episode of the series, I thought it was time to bid farewell to the community that let Black people shine around one of the whitest shows on television. I reached out to some of the purveyors of #DemThrones and #ThronesYall to find out what the community has meant to them and round up some of the best Black content from Season 8.

"The times I feel the safest, most seen and understood on Twitter (cause we know how volatile that place can be) is when Black Twitter collectively has a hashtag, especially surrounding events that may extend past our community. #DemThrones and #ThronesYall is perfect for that because the only people who could understand specific jokes—like why we were rooting for Grey Worm and Missandei to get the hell out of Winterfell and go to Atlanta—are people who look like me. It just warms my heart to nerd out over dragons and magic with my people. For whatever reason, a lot of people think Black people don't have an interest in these things. But we're here, and we've been here. Y'all are just starting to see us through these hashtags.

"Black people are the most engaged, creative, and fun when it comes to live-tweeting events of all types and Game of Thrones is a significant moment in entertainment history that spans the globe. Using the Black GoT hashtags not only help us to tap into our main audience, but to speak directly with like-minded individuals while enjoying a shared experience from the perspective of the Diaspora. Our joint commentary provides another layer of enjoyment and enhances the viewing experience. It's like being in a room, watching with a bunch of friends, while sharing hilarious observations and interesting theories."

"I use the Black GoT hashtags when discussing the show in order to keep pace with the BEST GoT takes. Black Twitter is undefeated, especially when it comes to hot memes and GIFs seconds after a scene takes place. I can't imagine [watching] this season without the simultaneous dialogue [of] the #DemThrones hashtag."

"I used the hashtag #DemThrones as a tribute to the originators of the hashtag: the podcast FiyaStarter. It has also led me to a community of Black commentary, and it is consistently the highlight of my week. Everyone is so funny, witty, and quick with their memes that the hashtag can take on a life of its own. Many weeks, #DemThrones is better than the show itself. It's a place where people can voice specific concerns about things that affect Black people without being interrupted by white folks complaining that we're 'making it about race.'"

"I've used the hashtag #ThronesYall as a way to connect to a community. To tweet and interact with other fans of color who enjoy the GoT fandom just as much as I do."

"I love using the Black GoT hashtags because I feel less alone when I watch. The show is problematic and very white. #DemThrones and #ThronesYall is a safe space to vent about it with people who get it. What makes it even more fun is that the tweets are freaking hilarious. It's like the best kind of 'laugh so you don't cry' situation sometimes. It's a dependable community where Black people commiserate."