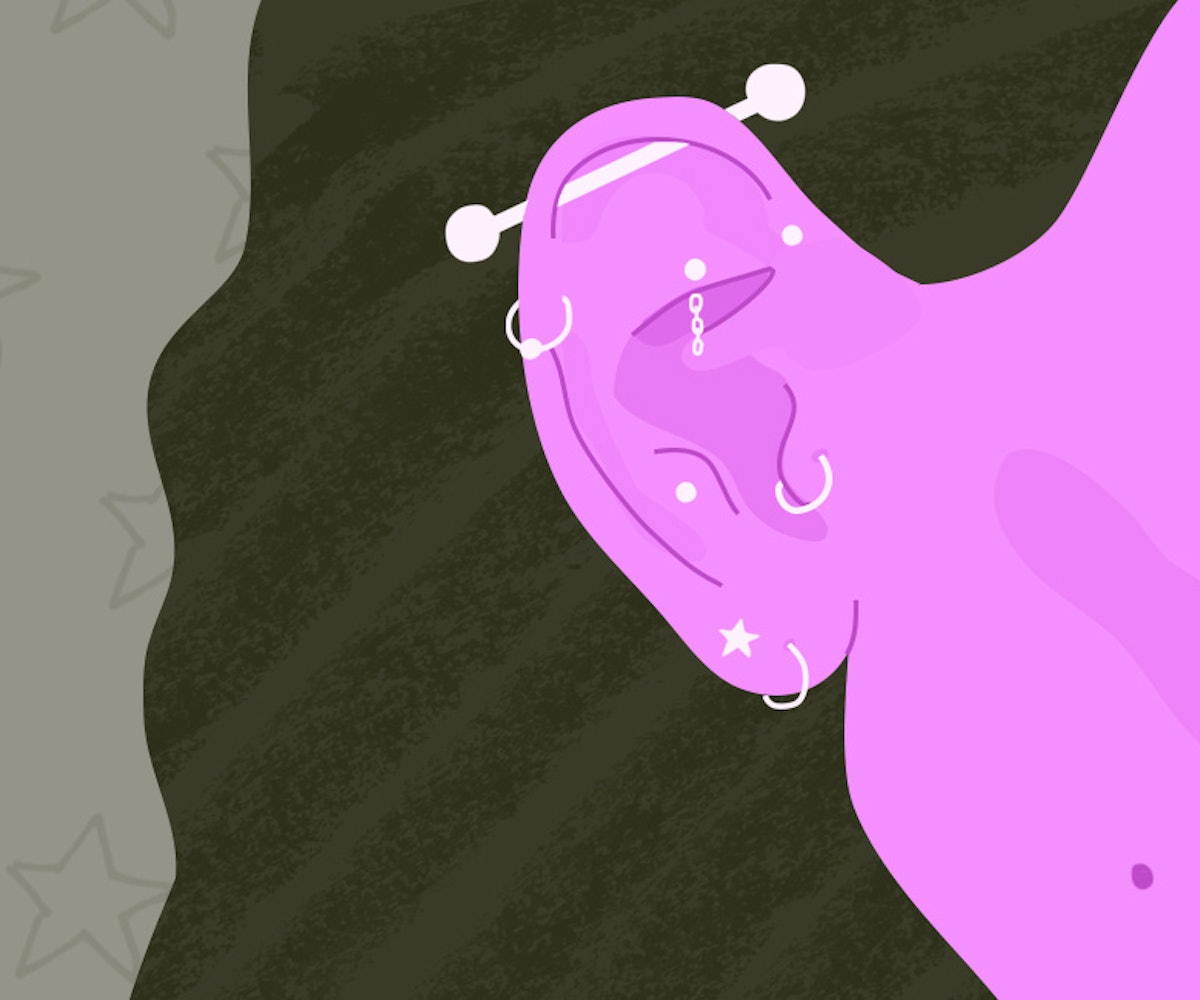 Carefully curated ear piercings don't get enough credit. They're not as intimidating (or as hard to heal) as, say, a nose or belly button or nipple piercing, they're pretty easy to get done, and they look great with the right jewelry (which you can switch out as often as you want, mood-depending). But before you start planning your own ear party, there are a couple of things to know.

Perhaps the most important, according to Cassi Lopez, head piercer at New York Adorned, is getting the jewelry right. She says you want to go with implant grade steel and titanium, or 14/18K white and yellow gold. These are higher quality and won't irritate the skin. Some other things to keep in mind: Don't touch your piercing while it's healing, clean regularly with a saline solution (not tea tree oil or soap and water, Lopez says), eat prior to getting pierced (especially if you're prone to getting light-headed), and don't get more than three to four piercings at a time. Lopez says, in that case, "your body's trying to heal multiple things at once; and the more you get, the slower it'll be."

Another thing to remember, after you get pierced, is that there's a difference between an infection and irritation. The latter, Lopez says, is extremely common, but it's important to know the difference. "Anytime you get a piercing, it's naturally going to secrete lymph fluid, that's just what your body does. And that's usually like a clear, white-ish color," Lopez explains. Those tiny bumps people sometimes get are also fairly common. "Usually, the irritation comes in the form of improper jewelry size, or improper jewelry material, poor aftercare, trauma in the form of getting hit or sleeping on it, things of that nature." Apologies in advance for this visual, but Lopez says of infections: "If your ear is secreting, and it's green and kind of smelly, then you want to go to a doctor."

Ahead, we get more specific and break down what you should know about different ear piercings. Let the party begin…

Depending on the household you grew up in, you might've gotten your ears pierced as a baby, or you might've gotten them done when you were a teenager (in that case, you probably went to Claire's while cruising around your local mall). Either way, the lobe is usually the most common first ear piercing, which might have to do with the fact that it's the easiest healing spot. "Lobes are very vascular, so they get a lot of blood flow," Lopez explains. But just because it's common, doesn't mean it has to be boring. You can get multiple lobe piercings, play around with the spacing, or try out a

picking out your jewelry

Cartilage piercings take a long time to heal for the exact reason lobe piercings heal quickly. "The higher you go on your ear, the less blood flow you get, so that's why cartilage takes forever to heal," Lopez explains. It can also be difficult for helix piercings because of the specific location. "That area on the outer ear has constant attention from everything—from your hair, hair products, hats, etc.—anything that rubs up against that is going to prolong the healing process." Some tips for helix piercings: Switch from overhead headphones to in-ear ones, be extra careful when washing your hair, and maybe try doing the piercing during a season where you don't have to wear a hat.

Lopez says a daith piercing should be one of the easiest to heal because it doesn't have as much interaction with the outside world. But it's also pretty easy to forget about since it's not as in your face as others. So, just make sure to clean it regularly (a spray bottle is helpful in this instance, since it's the inside of the ear). Lopez also shares that an issue for some people when it comes to this particular piercing is that the ring has to be pretty big when you first get it done which doesn't always ~vibe~ with people's aEsThEtiC. "If you have a ring that's a small diameter, it's going to take forever to heal, if it heals at all," she says. So, if you are interested in getting your daith pierced, prepare to put your pride to the side for a couple of months until you can switch out the jewelry.

A rook piercing can be started with a ring, but Lopez recommends a barbell instead. In fact, she recommends barbells or studs over rings a lot of the time, simply because there's less movement involved and, therefore, they are easier to take care of. Rook piercings are similar to other cartilage piercings. It's a pretty exposed area, so just be careful of snagging. But since it's located in a more discreet spot than, say, helixes, it'll be a little easier to deal with.

Conch is another one that's more on the inside of the ear, so it won't be too hard to heal. Again, Lopez recommends starting out with a stud instead of a ring. An orbital piercing can be a little trickier because it needs to be pierced at the right angle and with a larger diameter ring, but she says it's a fun piercing that's grown in popularity over the years.

Depending on your ear anatomy, some people might not be able to get their tragus pierced. The tiny area has to be fairly big and Lopez says she often has to turn people down. Ditto goes for the anti-tragus, which, she says, is super-popular right now. "Customers always want super thin, tight fitted rings, and that won't fit," she explains. "It's a nightmare trying to heal one of those in an ear because that type of area swells up so badly and if you get a super-thin ring, it kind of works like a cheese grater. Once your ear starts to swell, it'll pull on it, and it'll kind of split and try to come through." So, barbell it is. And, once it heals, you can put a ring in it.

Speaking of changing out jewelry, Lopez says not switching tends to be where people get into trouble, especially when it comes to the tragus. When you initially get pierced, the jewelry is typically longer than it needs to be, so "if there's too much length on that what will happen is it'll start getting caught on things and that itself will cause irritation," Lopez says. You should be going back to your piercer after three to four weeks anyway, and they can determine whether the jewelry is ready to swap then.

An industrial piercing is another that depends on your anatomy, and Lopez says it's the areas she turns down the most. What's the ideal ear shape, you ask? "You need good, deep ridges around your ears," Lopez describes. "All the way from your forward helix to the side of your ear. Also, the center part of your ear has to be flat and can't pop out. It can't be super-round otherwise what'll happen is the jewelry will press against it, and it'll cut into that part of the ear."

Another thing to consider is the angle of the piercing. "If the angles aren't perfect, what'll happen is, the bar that goes through it is going to force the angle straight up and that's why people get all of those bumps all over their ears," Lopez explains. She stresses that going to a reputable piercer is important for all piercings, but particularly this one since it can be so tricky.