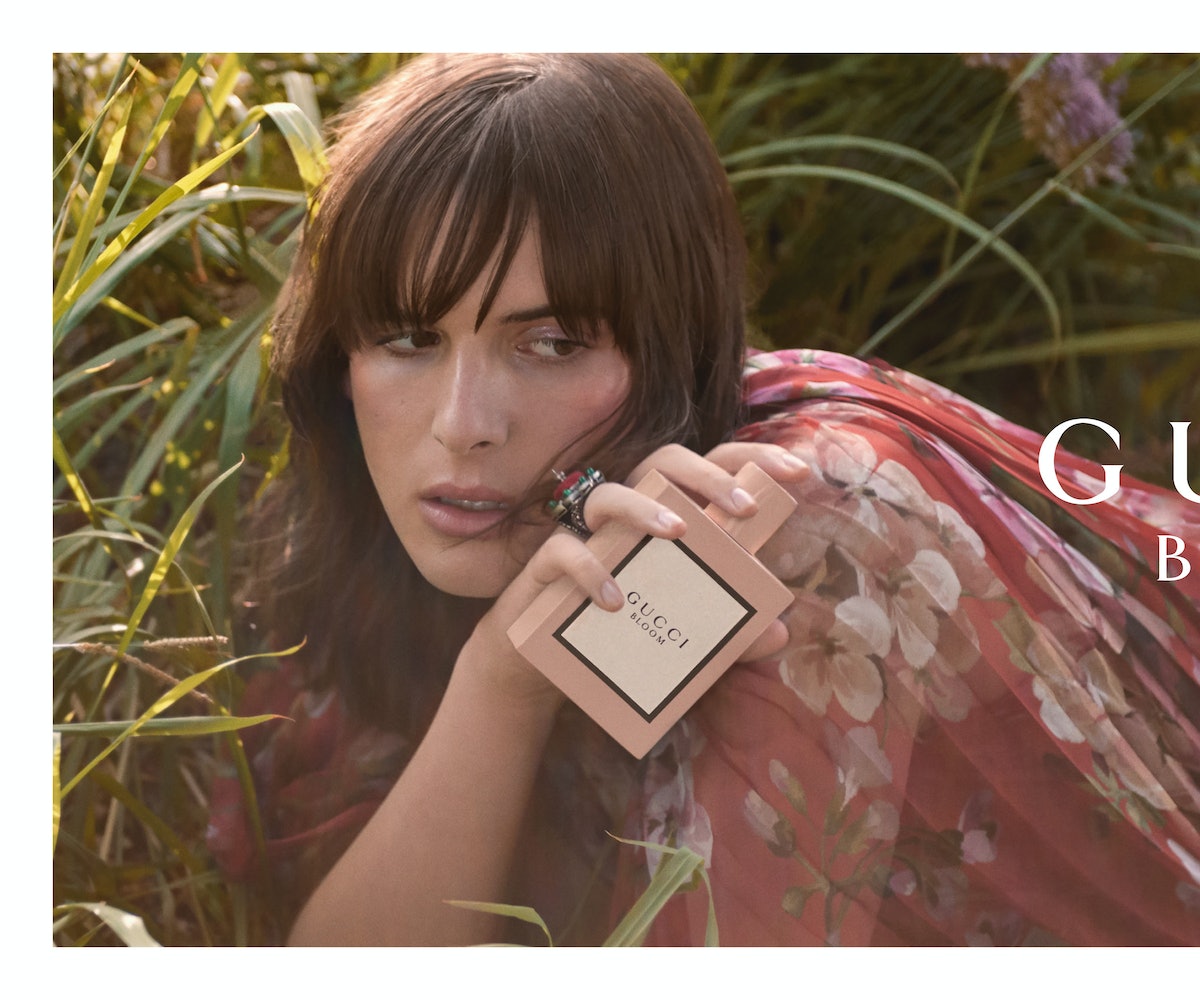 Image courtesy of the Gucci

Even amidst an already demanding schedule filled with acting, off-Broadway roles, and serving as the face of Gucci Bloom's Ambrosia di Fiori perfume, Hari Nef has added one more bullet point to her 2020 to-do list. The globally known fashion icon is taking the year to get back to her pureset self; taking it back to basics and carving some well deserved time for herself and herself only. 2020 is the year of unconditional self-love, at least according to Nef.

It makes sense, considering that the actress, model, and writer spent the better half of the last decade in the limelight, landing magazine covers for major publications like ELLE, Love, andOut; starring indozens of campaigns from L'Oreal to Aerie to Everlane; breaking into television as 'Gittel' on Amazon's Emmy award-winning series TRANSPARENT; and even taking to the runway for Gucci — all while marking a moment of progressive change in the industry as a trailblazer and activist. It's also informing the work she's taking on, including her latest campaign for the latest Gucci Bloom fragrance, Ambrosia di Fiori.

Speaking with NYLON by phone, Nef revealed how she views her daily beauty routine as a time all to herself, and how that lends itself to fragrance — a category that, to her, has always been tied to the ways in which she explored and expressed herself. As the actress explains, there's more to a beauty routine than simply completing something that transforms your outer appearance.

NYLON recently caught up with Nef to talk about the new campaign, how she approaches self-care, and how her teenage mall days (and the local Hot Topic) may have helped play a major role in shaping her entire identity. Read highlights from the conversation, below.

Gucci Bloom Ambrosia di Fiori was created with the idea of fully embracing who you are. How does that align with your ethos?

The Gucci Bloom family, and particularly Ambrosia Di Fiori, lends itself to multiple ideas and contrasting ideas of what a fragrance can be. On one hand, it's a super accessible floral fragrance, that is obviously and rather delightfully feminine. At the same time, you have an integration of ingredients like Rangoon Creeper, which has never been smelled in a fragrance before. These aren't conventional ingredients for fragrance, and they're not something we're used to smelling at the luxury fragrance counter at the department store. You have a way in, but you also have a way somewhere else. Those are the contrasts that I like to play with when I walk outside my door every morning. There are rules that I follow, and there are rules that I break, and that tension makes me feel strong.

What do you think is your favorite part about the Ambrosia scent in particular, and how does fragrance work your way into your routine?

Ambrosia is warmer and richer and the rarity of the Orris. There's something regal about Ambrosia di Fiori. It kind of makes me feel like an empress from yesteryear. And I don't mean the 20th century, I mean probably longer before that. Of course, Alessandra the creative director references hundreds of years in his designs.

I wear fragrance almost every day. Ambrosia is something that I would pick off the shelf on a day where I wanted to feel regal, I wanted to feel strong, I wanted to cut through the contemporary screaming mess that greets you when you walk out the door every day in Manhattan. if I could carry some of that regal, ancient anointed energy with me out the door, there are definitely days, more than I might like to admit, where a bit of that could serve me, so it's nice to have that tool in my arsenal with this new iteration,

Yeah, fragrance emerged for me in my teenage years as something affordable that I could buy at the beauty store in the mall, which I added to my new clothes from Hot Topic and Urban Outfitters, to the records that I bought and put on my Myspace, to the films that I bought and also put on my Myspace. All of the things that I was assembling to communicate about myself externally and through context. That's really important to a teenager when they're starting to discover a sense of self, and fragrance emerged as a unique and visceral tool to add to that tool belt. It was a way of expressing myself to anyone that came within the vicinity of my body. It wasn't like I was telling them who I was or showing them who I was. In kind of a sci-fi way, I could get them to smell who I was.

The first time I ever went to pick out a fragrance, I smelled every single one with those scent sticks. I tried to figure out which one smelled like me. Fragrance is so personal. When you choose a fragrance, that fragrance becomes personal to the people who come around you.

In addition to the daily use of fragrance, what are some of the other items or practices you incorporate into your daily beauty routine?

I'm pretty vigilant about skincare. After a long time I've been sort of nailing it down to what works for me, and I vary it up to keep my skin guessing. I try to exfoliate my entire body in the shower at least twice a week, just to get rid of dead skin. It's a very personal, sort of intimate, ritual that makes me feel really good for me. It feels really good and loving for me to do that for myself. And then, I moisturize my whole body as well. That's one of my favorite parts of the day.

Going to get my nails done always feels like a punctuation on the day. You're sitting there, for at least an hour or two, and you can't do anything with your hands. You can't use your phone, so I almost find going to the nail salon meditative. You can talk to your technician, zone out, or listen to a podcast. Unconditional self love is on my agenda for 2020 in a big way, and for me that often starts with the body. I think loving on and being kind to your body is something to be mastered.

As someone who spends so much time in the spotlight, how have you learned to make more time to care for yourself?

Those moments when you're really in the spotlight — when you're in front of a photo pit or at a party that's all schmoozing, or really getting read your place on the totem pole by how someone at a party treats you, even the process of auditioning — it costs something. I know that my work costs something, and I know that my work is work. It's not just art, it's not just fun time, it's not just creative expression, it's work, and it takes energy just showing up to let's say, a red carpet event where every moment, you are confronted with not what people think of you, but what people think of the version of you that exists in a public space, which can never reflect the whole you.

Beyond 2020, what else do you have planned for the future?

I just signed a lease on a new apartment in New York city and I'm really excited to make my first adult home I'm really looking forward to putting together a home with care and with intention, and building a space for myself that makes me feel lighter and makes me feel love. Doing it alone is a little daunting but exciting. I'm also really happy to be coming back to New York after two years living in and out, living in LA. So I'm kind of, you know, reigniting my affair with New York, and if nothing else, trying to remain vigilant in caring for my friends, in making and seeking work without too much attachment to the outcome of the work, and vigilant in love.

I'm coming to understand right now is that there is no control. You can never have control and we never know. Anything outside of ourselves that we decide to rest our head on is a risk, which isn't to say don't take the risks, but at the end of the day, all one has, is one's self. If you can get right with that person, if you can get right with yourself, if you have the tools in your toolkit to care for yourself and love yourself, make yourself feel the way that that job made you feel, that partner made you feel, or that paycheck made you feel, if you can alchemize some way to give that to yourself, then even the hardest sh*t that can happen to you can only permeate so far. And that's a lot of jargon and certainly aspirational, but it's an aspiration that feels healthy to me.

NEXT UP
Beauty
This Hailey Bieber-Approved Blush Now Comes In 4 New Shades
Beauty
12 Lunar New Year Beauty Releases To Ring In The Year Of The Rabbit
Beauty
Megan Fox Is Completely Transformed By A New Blonde Bob
Beauty
This Viral Black Honey Lipstick Dupe Is Only $5
Style + Culture, delivered straight to your inbox.