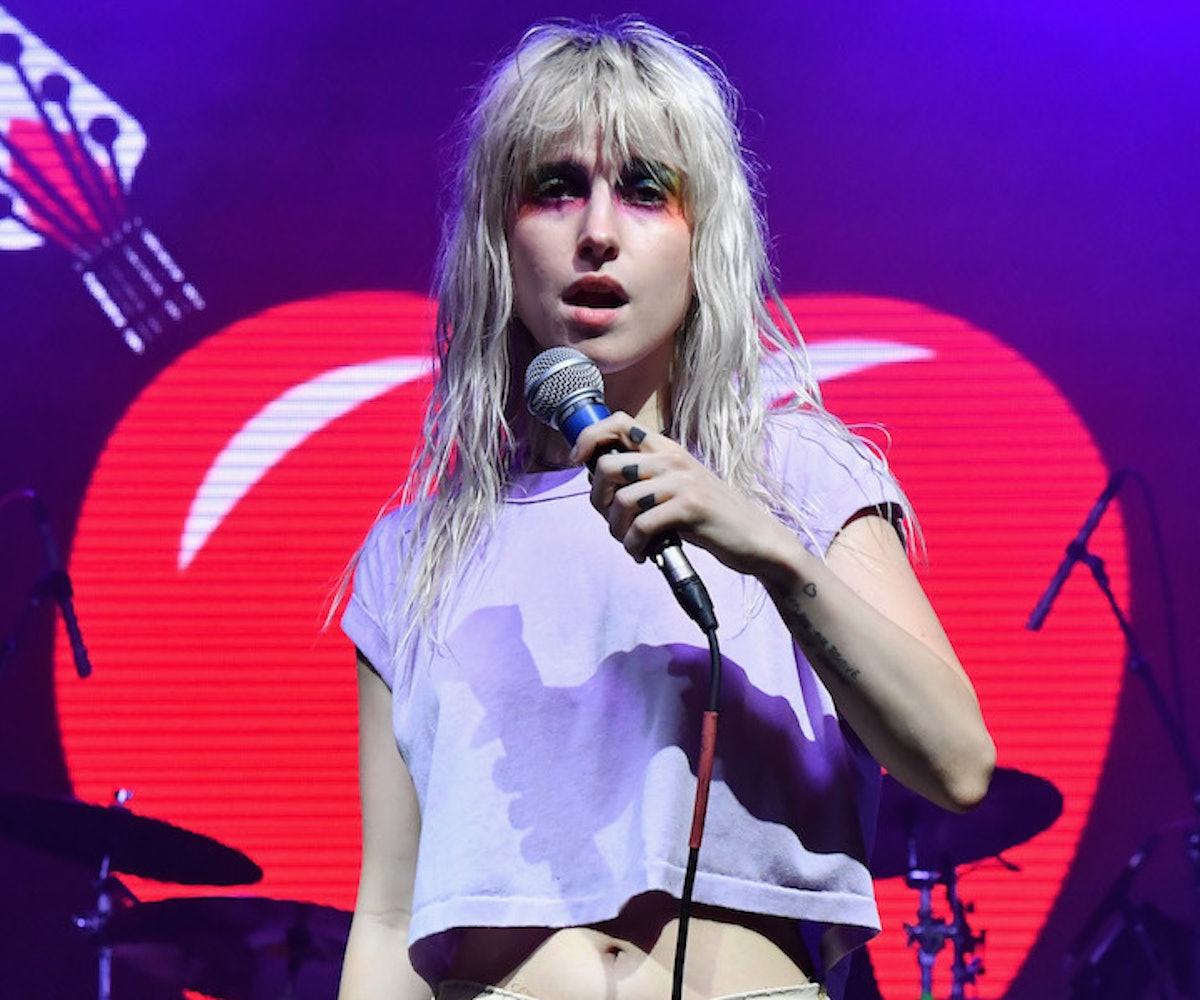 When searching for a title for what could ultimately be the band's final album as a collective group, Paramore settled on the name After Laughter to signify what comes after joy. In other words, that "look that comes across [someone's] face when they're done smiling," according to the band's lead singer, Hayley Williams. The title also doubles as a euphemism for expressing the emotions humans often feel that aren't necessarily positive — things like pain, depression, and sadness. The resulting album was magnetic, filled with upbeat pop-punk anthems that effectively turned sad lyrics into riot-worthy 80s-influenced party tracks. Boasting song titles like "Fake Happy" and "Hard Times," After Laughter was instantly heralded as one of the band's most personal works. But in a new interview with Zane Lowe on Apple Music, Williams revealed that, at times, the pain she wrestled with while working on that album was overwhelmingly real. Talking about her experience, Williams opened up about struggling with mental health issues while also trying to perform the typical duties of being in a band and how it all ultimately inspired her upcoming debut solo album, Petals for Armor.

"During After Laughter, it was really rough," the singer says about the period her band was recording, promoting, and touring their 2017 album, confessing that the process was difficult for her as she tried to fight against her depression. Referring back to the interview she did alongside her bandmates with Zane Lowe in 2017, Williams expressed appreciation for the sensitive way Lowe approached the subject of mental health, saying, "The day we did the first interview at Taylor's house, I had moved into my home. I woke up, got ready, tried to look cool, tried to look good. You asked us such beautiful questions, you were so empathetic, and it was the only time that I felt safe the entire cycle talking to anyone that wasn't a bandmate. This is so crucial to artists, that we have to be able to come out and talk about what we've made. It's important for fans, especially, and they deserve that. But without the right voices in the conversation, so much gets missed, so much gets sensationalized, and I'm just really grateful."

Elsewhere, the singer admitted to dealing with suicidal thoughts and credited her dog for ultimately saving her life. "My dog is the reason I'm alive, because he would've been waiting on me to get home, no matter what. You know how sweet little puppies sit and they wait? I couldn't think about it," she mentions. "And I'm glad, you know? Because life is still hard. It didn't become a breeze overnight or anything and it's been years and it's still not a breeze, but it's so rich and now that I'm taking account of all these feelings and I'm feeling all of them, there's this beautiful rainbow versus just the deep end."

While After Laughter did touch on these feelings, Williams also discloses that it wasn't always easy for her to use music as an outlet for her emotions. "The way that I experience my anger is heat in my face — it's visceral. I think I mostly tap into it without shame when it's for the sake of somebody else. When it's for me, I go straight into shame," she explains. "Taylor [York] is the first person that ever told me anger is neither a bad nor a good emotion. It's just an emotion. It's a feeling. It's a thing. You don't have to assign it to something. Just let it breathe. Just feel it. I had the hardest time being angry while we were writing After Laughter and I clearly had a lot of to be mad about. But I was depressed. And I think often depression is masking other pointed feelings."

Luckily, Williams has since been able to turn that pain into beautiful art, pouring her emotions into her music in a whole new way now that's she's recording as a solo artist. As she says, "I mean it's where Petals for Armor comes from. It's the idea that being vulnerable is a shield. Because how else can you be a human that's inevitably gonna fuck up and trip in front of the world a million times? Your world could be a stage or your world could be your job and your apartment. It is subjective, completely." Later, she poses a rhetorical question: "What is the problem with making mistakes? Are we scared of being canceled, or are we just scared of looking stupid?"

Petals for Armor is out via Atlantic Records on May 8. Watch the videos for new singles "Simmer" and "Leave It Alone" here.