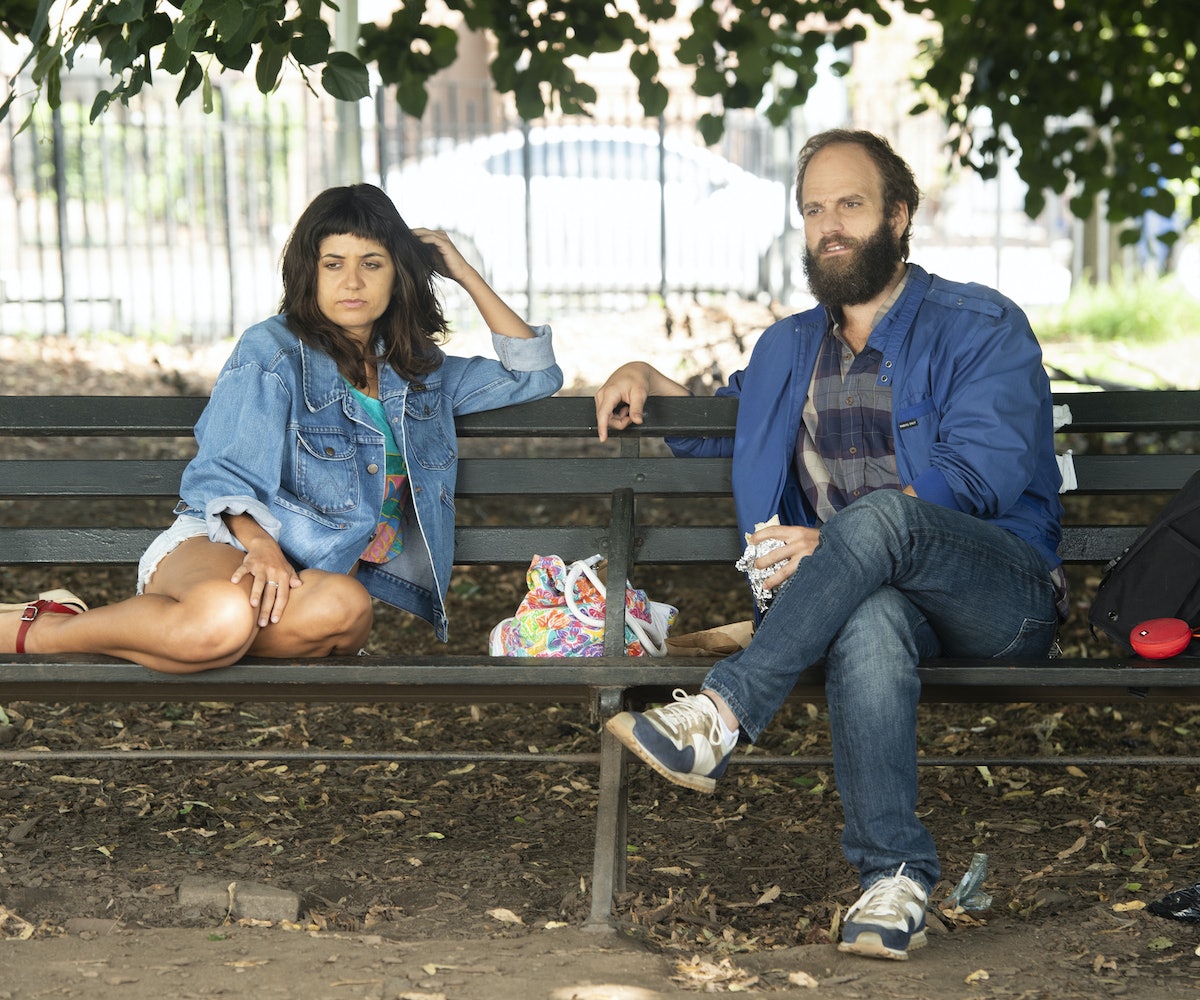 It might be possible to get literally further away from the fetid, teeming, summer-hot Brooklyn streets, where most of HBO's High Maintenance is shot, than the breezy, poolside, rooftop cabana of the secluded Beverly Hills hotel where I met Katja Blichfeld and Ben Sinclair, the show's creators, to talk about the show's third season, but it's not really possible to get further away, like, existentially.

Because to exist in the world of High Maintenance means depending on the kind of chance encounters that happen when chaos is life's foundation, rather than an unwelcome intrusion. This is the kind of chaos that comprises life in New York City; it's relentless, but it's home. But here, nestled high above the trees lining the street in our hotel aerie, there is only calm. There will be no chance encounters, no chaos, because, in order to even be up there, I needed to get someone to swipe me into the elevator with their key card, and then I had to be directed through a warren of gym equipment to a set of marble stairs leading up to the all but empty rooftop. Though it was nearly absent of people, it was drenched in late winter California sun; it was pristine.

There Blichfeld and Sinclair sat waiting for me; he was in a dusty pink sweater, she was in white leather cowboy boots. There was a book of watercolors on the table in front of them, Sinclair has been dabbling since his mother got him a set for Christmas. I mentioned that I'd been using watercolors lately, too, and had made a painting for my friend, of her bird, Soda.

"It is a Seinfeld name," I said. "She used to have another bird named Seven, but it died."

Starting off our conversation by talking about death seemed appropriate. Since High Maintenance first launched in 2012, in the form of 10-minute episodes on Vimeo relaying the experiences of various New Yorkers, whose only connection to one another was their shared weed dealer, The Guy (played by Sinclair), to its 2016 migration to HBO, it has reliably looked, in an unapologetically voyeuristic manner, into every facet of human experience, from lust and love to envy and anxiety to grief and loss. In its latest iteration, the just-finished third season, death was, from the first episode to the last, an omnipresent figure, its possibility coloring even the most benign interactions a shade darker than they might otherwise appear to be.

"We were all having the same thoughts, and I think a lot of us were thinking about death," Blichfeld said about this season's writing room. "I know it always happens—it's not like there's some death season or anything like that—but there was this feeling in the room of a lot of contemplation about it, for some reason. It was just on a lot of people's minds, no matter what their age or station in life was."

And while it's true that there is no death season, it's also true that, ever since Trump's election, just about everyone I know has been cycling through the Kübler-Ross Stages of Grief; most of us are now in the depression or acceptance stages, most of us see the endings of things all around us. And what High Maintenance has always been particularly gifted at doing is depicting myriad endings—sometimes involving death, sometimes breakups, sometimes just the casual transience of life in a big city. But what this familiarizing of endings allows us to do, also, is to see beginnings just around the corner; it encourages us to be present in each and every moment, to be ready for what comes next.

This kind of consciousness isn't just imbued into the show because of Trump; there is a more intimate reason for why High Maintenance traffics in endings, and that is the evolution of the personal relationship between Sinclair and Blichfeld, who were married when they conceived of the show, separated after its first season on HBO, when Blichfeld came out as gay, and are now officially divorced, though have an easy camaraderie together, and a healthy, productive working relationship.

Their separation played out, sort of, in the second season of the show, notably in the perfect episode "Scromple," in which The Guy spends a day with his ex-wife, Jules (played by the incomparable Kate-Lyn Shiel), after getting into a bike accident. It was the first in-depth foray into The Guy's personal life, but the third season explored that a bit further, allowing The Guy to serve as something of an avatar for all of us who feel lost and like we need to find ourselves.

Sinclair said of the melancholic feel to this season:

I think when we separated, it was momentous, because it was Trump's election, and then I think we were taking a lot of stock in our lives. Then, there was a year of outrage and fear and anxiety and acceptance that it wasn't going to change any time soon. So, it's like a "what's next" kind of feeling. Like, what's the point of any of it, and why don't I just decide the life I want to lead if things are just going downhill? So, I think that was something we were feeling and a lot of people were feeling.

One way, of course, to deal with things is by not dealing with them, by escaping them. This was what seemed to be happening at the end of the second season when The Guy drove off in a clunky motor home.

"It's a symbol of something," Blichfeld agreed.

"Yeah...," Sinclair said, "some, like, phony-ass American dream that costs too much in gas."

Because, the funny thing about that RV, and the funny thing about trying to escape your problems, is that it never quite works out the way you want it too. When I mentioned to Sinclair and Blichfeld that I'd thought Season 3 might take place in Los Angeles, Blichfeld said, "We had grander dreams when the season started that we would maybe go to L.A.," but budget dictated that they only go so far as upstate New York, and even that was just for a day. (That lake The Guy paddle-boarded on in the season premiere was actually in Staten Island.)

But Blichfeld and Sinclair are not upset that they had to stay close to home; "that's our place," said Sinclair. And it's true that their portrayal of New York lives that are as close to representative as possible in a city of eight million people is unparalleled. This is something they really work to do, seeking inspiration for story lines far outside their friend group.

"If these people come across as being real people in the world, that is not an accident," said Blichfeld. "That is a product of us trying to make people who felt real. Hopefully, they're not the same face that you're always seeing on television, but slices of life that maybe don't normally get profiled."

This is the beauty of High Maintenance, and this is the way that it punctures the idea of all endings being a happily ever after. It revels in the subversive, it shines a light in the dark corners of our existence, it goes to the saddest places, and then it keeps going, it keeps shining, and it keeps reveling. There are no happily ever afters in High Maintenance, because that is the kind of ending that we all know is just a fairy tale, and not even a very interesting one, at that. Because, even when there is maybe the potential for happiness, there is no promise of forever, only the hope of something after.

"I would like to experiment more and take advantage of the elasticity that we get on our show," Sinclair said. "I would like more people to say, 'What the fuck were you thinking?'"

And Blichfeld agreed: "I like dark shit, too. I'm the queen of the sad ending. I don't have a problem with those things." But, she continued, she wants to "find a way to have those endings, but leave people hopeful about life."

It was hard not to feel hopeful in that moment, still up on that rooftop, embraced by the sun and the warmth. But that's not what made me hopeful; what made me hopeful was thinking about leaving there, going back into the chaos, back into the world of dead birds named after '90s TV shows, and messy relationships, and rage at injustice, and the ways we can all still find hope and a home in the midst of the collapse of the "phony-ass American dream."

You can watch all of the third season of High Maintenance on HBO, now.