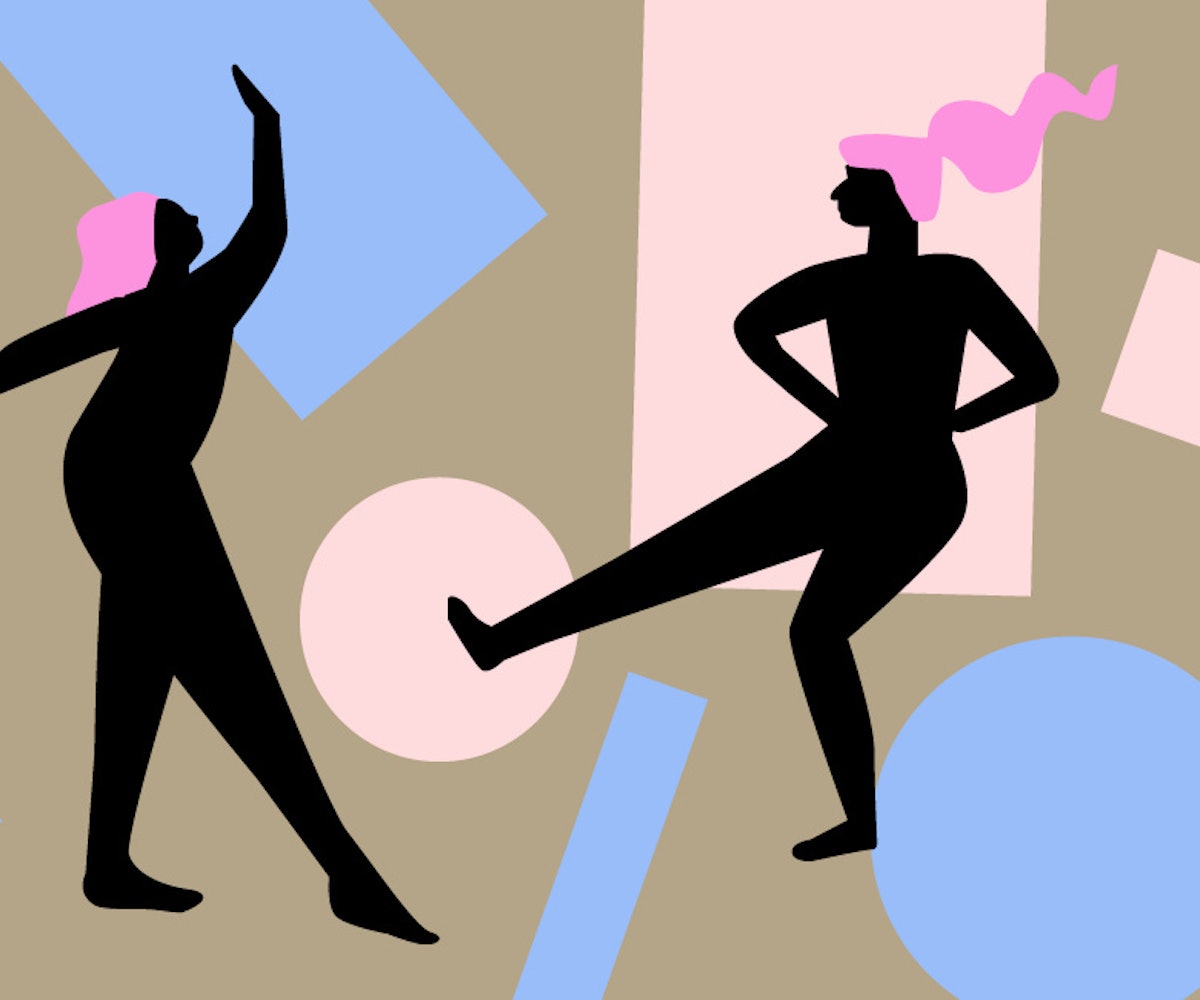 When I pitched writing about fitness for NYLON a couple years ago, I wanted my column to be for the readers who were exactly like me: people who maybe pretended to pass out to avoid running the mile in gym class in high school, people who couldn't be pushed into doing team sports, people who just didn't see the point in exercising. In short, I wanted to bring fitness to the people who hated the idea of fitness, were intimidated by it, or just didn't care for the way it's presented in mainstream women's media.

It's been a really fun series to write, talking about the stress of being in a yoga class for the first time, about how running can help bust your writer's block, about how CrossFit isn't quite as bro-heavy as you may have feared. I know a lot of you are reading (and hopefully finding some good information). But for those who are still scrolling past the health content, I wanted to get on my soapbox for a hot second and talk about why movement—in whatever capacity you prefer—matters. It's not about body image or fitting into a certain size, it's about being able to kick ass, feel better every day, and simply lead a healthier life.

So, on that note, here are the bullet points on why you need to move more, in case you need convincing. (And if you want to get moving, check out all the past columns I've done about getting started in dozens of different sports and workouts!)

We all remember that moment in Legally Blonde when Elle Woods explains, "Endorphins make you happy," right? She actually has a ton of science to back that up. A study done on commuters showed that those who commuted by using their bodies—biking or walking—were happier than drivers or people who used public transit.

You Make Time for You

Marathoner and pro runner, author and mom Kara Goucher says that women need to take time for themselves—and often, one of the only times that we have for solo reflection and a mental reset is when we actually get our bodies moving. If you're in the house trying to chill, it can be hard to truly sink in and relax with yourself. But by carving out time to go out for a walk or a run, you're making the time for you—just you—and that's just as important as the actual workout.

Study after study has shown that exercise is capable of combatting symptoms of depression and lowering anxiety, yet we still don't prescribe it as a helpful tool for controlling our anxious tendencies. While it can't completely cure depression, sometimes a walk, run, or kickboxing class can get us moving out of a stressed-out state and into a better mood. (And in one study, adults with depression who were assigned exercise as medication, versus a group that was given meds, actually showed that exercise was just as effective, and the group who continued to exercise after the conclusion of the study had lower rates of relapse.) Major work meeting or serious talk with your life partner coming up? A quick jog might be what the doctor ordered to calm you down.

You're More Confident and Friendly

When you do find a type of movement that you love, whether it's reliving your childhood dream of being a ballerina by taking a barre class, running in the park, hiking mountains on the weekends, or riding your bike to work every day, studies have shown that you'll be more confident and potentially even more social as a result. As a former shy anti-athlete, I can personally attest to this one: After being coerced into joining a cycling club in college, I didn't just find a sport that I loved, I found a platform for my voice, urging more women onto bikes, I found a group of best friends who've lasted a decade, and I realized that I didn't need to hide behind books or black nail polish. (Though I still wear the black nail polish and read a lot.)

There's a laundry list of diseases and conditions that are partially preventable by adding exercise into your lifestyle—and a little goes a long way. From a lowered risk of heart disease to a lessened chance of certain types of cancer as well as Type 2 diabetes, it's just a smart way to do your future self a favor. One study showed that even just commuting to work by bike could cut your risk of premature death by 40 percent. A similar study added that you'll also decrease your cancer risk. And, of course, the health benefits of keeping your body fat percentage in a healthy range can't be denied: Commuter cyclists were shown to have lower body fat percentage and body mass index measures compared to car commuters.

You're More Productive at Work

Good news: You're more likely to be productive when you've been moving more, according to current research. And several studies have shown that getting your movement outside versus in a gym will make you even better at solving problems and letting your creative juices flow.

You'll Find It Easier the Sooner You Start

You know what really sucks? Being told at the age of 40, when you're working a stressful 9-to-5 and have three kids at home, that you need to make sweeping lifestyle changes for your health. It's so much easier to start small while you're young, just getting in a workout or a walk most days of the week, versus needing to make huge changes in 15 years. That can be hard to fathom, but look at our parent's generation: So many adults in the U.S. are struggling with obesity, on blood pressure medications, dealing with complications from years of sedentary living—and we have the knowledge and the resources to make sure that doesn't happen to us.

You'll Save Time and Money

Gym memberships may be pricey but think of the long-term cost savings like a decrease in health care costs and an improvement in overall health. If you make movement part of your day by using a walk or bike ride to cut out a drive or a public transit journey, you'll save cash there as well. A Scottish agency did a survey of people who rode to work and found that over a month, they saved on average nearly 9 percent of their paychecks compared to when they drove. (The survey also noted that participants burned 33,744 doughnuts worth of calories. That is SO. MANY. DOUGHNUTS.)

You Will Find Love

… Well, you'll find a love of movement, anyway. Though be warned, it might not be the first thing you try… It might take a few yoga sessions, spin classes, hikes, and heavy lifting before you settle on your favorite pastime. "The coolest thing is that I genuinely love riding my bike. If it wasn't my job, I would still ride my bike," says Mountain Bike World Champion and Red Bull Athlete Kate Courtney. "For me, riding is really social, it makes me feel healthy, and mostly for me, it's a huge stress reliever and a huge source of joy in my life. It's such a big part of what makes me happy. Even after World Championships, which was a really intense weekend, I'm in the Dolomites riding up in the mountains and reconnecting to why I love riding my bike."