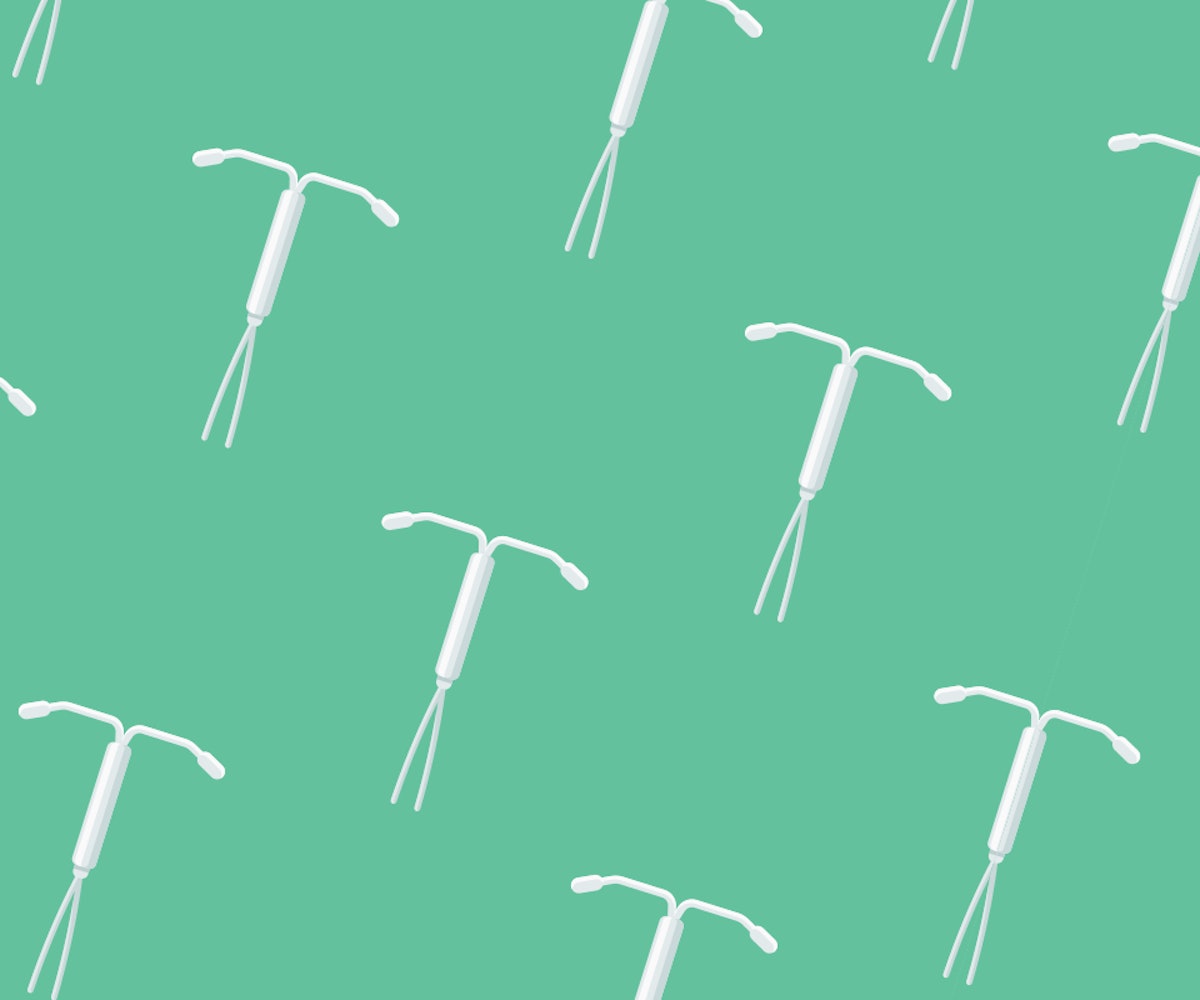 Here's a fun fact: In 2017, Planned Parenthood saw a 900 percent increase in demand for intrauterine devices—thought to be due to Donald Trump's presidency and the accompanying fear of what this meant for women's access to abortion.

But another reason the IUD has soared in popularity is maybe thanks to the fact that women are finally realizing the benefits of the tiny T-shaped contraption. Namely, that once it's in, you don't need to worry about it till it's time to take it out again—which might not be for a full 10 years. It's also reportedly the greenest birth control option on the market, so you can piss off climate change-skeptic Trump minions in more ways than one.

Of course, the IUD isn't perfect—and it isn't perfect for every body—but it is an appealing option, one that, with the help of Dr. Rebecca Booth, we explore in our explainer, ahead.

An IUD, or intrauterine devices, is a long-term contraceptive that's more than 99 percent effective (compared to 85 percent for condoms and 91 percent for the pill). It works by making the uterus a hostile place for sperm by thickening the cervical mucus either with the use of progesterone (in hormonal IUDs) or the presence of copper (in non-hormonal IUDs).

As mentioned above, there are two kinds of IUDs: hormonal and non-hormonal. Hormonal IUDs come in a variety of options (which you can read about in more detail here), and all include different doses of progesterone. As Dr. Booth explains: "The technology is such that, just like spray tans, you've got some that last for a week and some for two weeks." Though, of course, hormonal IUDs last a little longer than two weeks. "The chemists get really clever with the delivery system," Dr. Booth says, explaining that they usually last three to five years, but that "in Europe, there's even an IUD that [lasts] seven years. But right now, the five-year is the longest one in the U.S."

There's only one type for those looking for a non-hormonal option, and that's the copper IUD known as ParaGard. These babies can last up to 10 years.

What Type Is Best For You

That depends! And is definitely a conversation you should have with your doctor. But Dr. Booth says most women are currently gravitating toward the hormonal IUD because of its availability in different sizes and varying lengths of effectiveness. It also tends to suppress menstrual cramps and volume of flow. Dr. Booth also notes that, depending on the type of progesterone used, it can suppress ovulation, which can have positive effects on the skin.

The non-hormonal IUD is great for women who might not want more hormones invading their body and know they don't want kids for a while. One downside is that it can actually make your periods heavier, so it might not be a good alternative for women with already heavy flows.

How It Gets Inside You

As you know (because we already told you), once an IUD is inserted, you don't have to worry about it for years at a time, though it can be taken out whenever a person wants. "They can be removed anytime, and removal is very easy because the uterus is made for things to come out," Dr. Booth explains. But what about the insertion? That process is a different story. "The uterus itself, even though it sits right at the top of the vagina, which is sort of skin-like, is a muscle," Dr. Booth explains. "So, one of the biggest barriers to acceptance for the IUD is that it hurts when you insert something through a little opening in a muscle." Anesthesia is typically used to help with the pain, and Dr. Booth says she often prescribes medicine for her patients to take the night before that helps soften the cervix, "which is sort of like the muscular, circular door to the muscle of the uterus." When the cervix is softened, the insertion (which only takes about 10 minutes, most of which are taken up by measuring, examining, and cleansing the opening of the cervix) hurts less—but be prepared for it to hurt.

Another reason women might not be team IUD is its cost, though Dr. Booth says that's less of a barrier since the Affordable Care Act. And, when you look at the cost spread out over a period of several years, it definitely doesn't seem as bad. It's an investment piece. Other concerns include the fear of having a foreign object inserted inside your uterus "and then certain risks such as the possibility that it might fall out or it might extrude through the uterus or, rarely, result in infection."

Who It's Not Good For

"The biggest group that has risks of having problems with retaining the IUD are women who have just recently had a baby," Dr. Booth says. "Because the uterus, after a baby, is a little bit dynamic. Meaning still changing, and so not as stable." Women with an abnormal uterus (which they might not even know they have) aren't the best candidates, and neither are women who have certain STDs. "You wouldn't want to place an IUD on a woman who had not had STD screenings because certain STDs carry a risk of infection in the pelvis," Dr. Booth explains. "So the doctor should test STD screening before insertion."

Dr. Booth says one of the biggest questions she gets from young people is whether or not their partner can feel the IUD during sex. The answer to that is probably not. If they feel anything, it might be the string attached to the IUD, which can be shortened. She explains that a woman can feel it if she reaches deep in her vagina with her middle finger but that's only, like, if you're curious. "The IUD is not like a tampon, it's not in the vagina," Dr. Booth explains. "But like a tampon, it has a string, and sort of like a tampon, it's a little bit trickier maneuvering it in than taking it out."

If you think an IUD might be for you, contact your doctor and talk about it. It might not be the route you want to go, but—as with everything related to our bodies—it never hurts to ask and start a conversation.