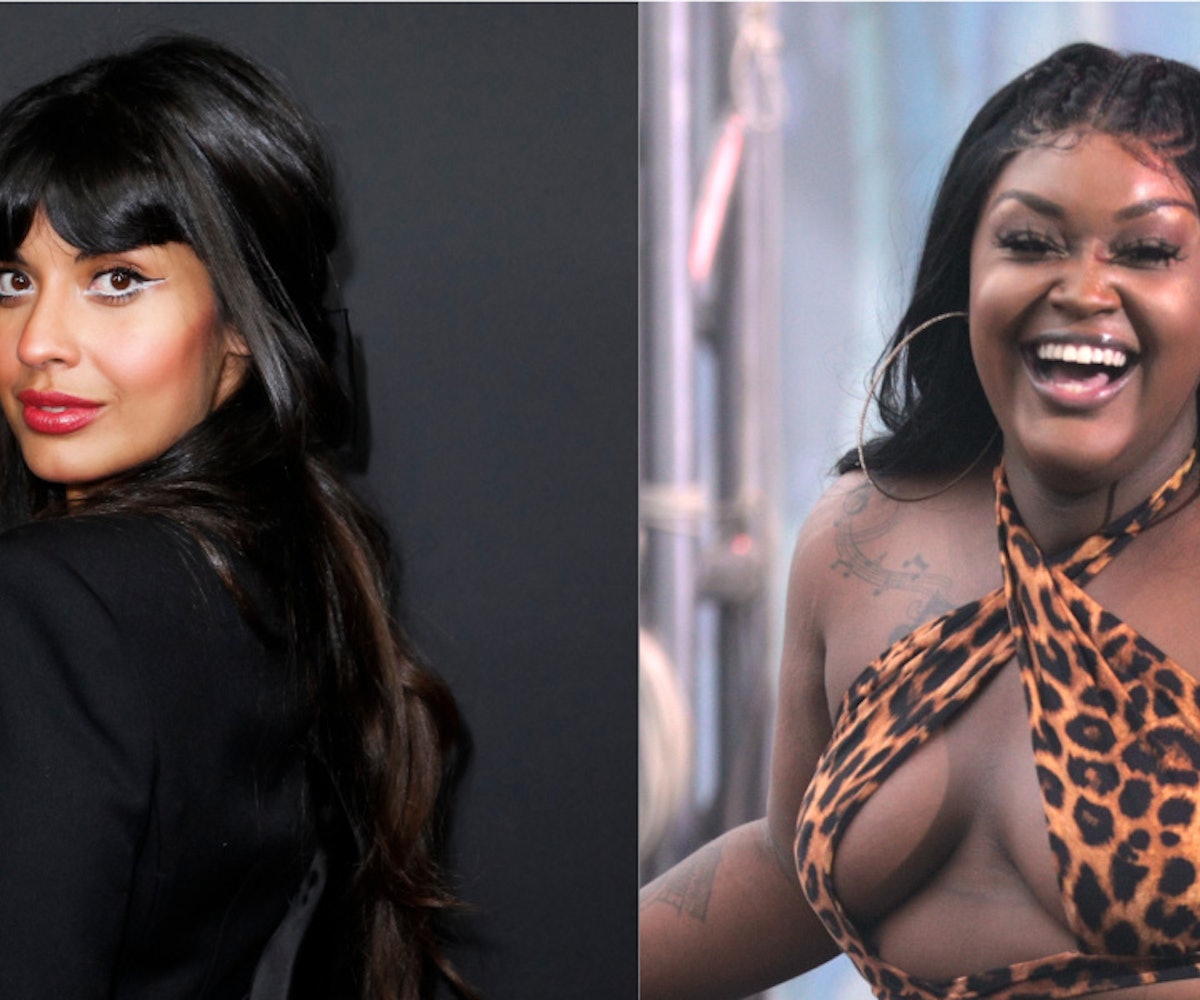 Good Place actress and body positivity activist Jameela Jamil is known for calling out celebrities for promoting crash diets on social media, jumping into the comments of influencers like the Kardashians to beg them to stop promoting unhealthy weight loss plans, and even creating a video mocking Flat Tummy Tea-style supplements. Yesterday, Jamil took to Twitter to target beloved rapper CupcakKe for tweeting the results of her recent "water fast." Fans are now criticizing Jamil, pointing out the bad optics and painful history of publicly criticizing Black women and their bodies, in addition to CupcakKe's on-going public mental health concerns.

To give some background: on Saturday, CupcakKe posted a pair of photos to Twitter captioned, "Water fast for past month & here's my results." CupcakKe has openly struggled with mental health concerns; in January 2019, she was hospitalized after tweeting that she planned to take her own life. She returned to music soon after, sharing new single "Squidward Nose" later that week, with a music video to follow only a month later.

Nearly nine months after CupcakKe's hospitalization, she posted a worrying video announcing to fans that she would be quitting the music industry and pulling all songs from streaming platforms. In the video, she expressed concern that she was "corrupting the youth" as her sexually explicit tracks garner more attention than her other songs. She added later in the video, "Even if I change the content [of my music,] I know for a fact that with me being my size, no one will support me. I realize no matter what I put out I will never be good enough for society, no matter how talented I am."

Jamil initially quote-tweeted CupcakKe's "water fast" post, but removed it after initial backlash from fans. She then tweeted separately, "I do see how the quote tweet function can be problematic," before defending her reasons for continuing her digital battle against promoting weight loss.

Jamil had also replied to CupcakKe's original post, separate from the quote-tweet, urging her to remove the tweet.

Jamil's call-outs of celebrities like Amber Rose and Cardi B for promoting diet and detox products have become the norm online, but her neglect in publicly criticizing a vulnerable Black woman has caused Twitter users to school Jamil on the nuance of the situation. "Acting like CupcakKe is an evil Kardashian peddling diet lollies was harmful," one person wrote, suggesting Jamil could have used her Twitter reply to open up a conversation privately with CupcakKe, rather than publicly shaming her.

Another added, "You see a Black woman who's clearly struggling and your response is to call her 'dangerous.' Why are Black women not allowed to just be struggling? Why do our personal struggles get interpreted as a danger to the public?"

Azealia Banks — who's feuded with Jamil on Twitter before — responded to the situation at length on her Instagram Story, saying, "Please white feminists, stop inviting her to be your token *brown* representative because she's toxic, manipulative, and haates herself for not being one of you, which his why she goes around trying to police how every woman deals with their ethnicity, beauty, and self." She closed by adding, "Leave CupcakKe TF alone!"

Jamil has since apologized to CupcakKe for "putting you on blast without knowing anything about u." She added in a reply, "But also, being extra careful to not pile on to black women, who are already piled onto, ignored and policed the most. I hear all the criticism. I see my fuck up."

Banks has, of course, responded to Jamil's apology via Instagram Story, writing over a screenshot of Jamil's Twitter, "If you were Black you would be called violent and angry. No one needs your help. Stop this white saviorism shit and go back to acting school." CupcakKe has yet to reply to the entire situation.