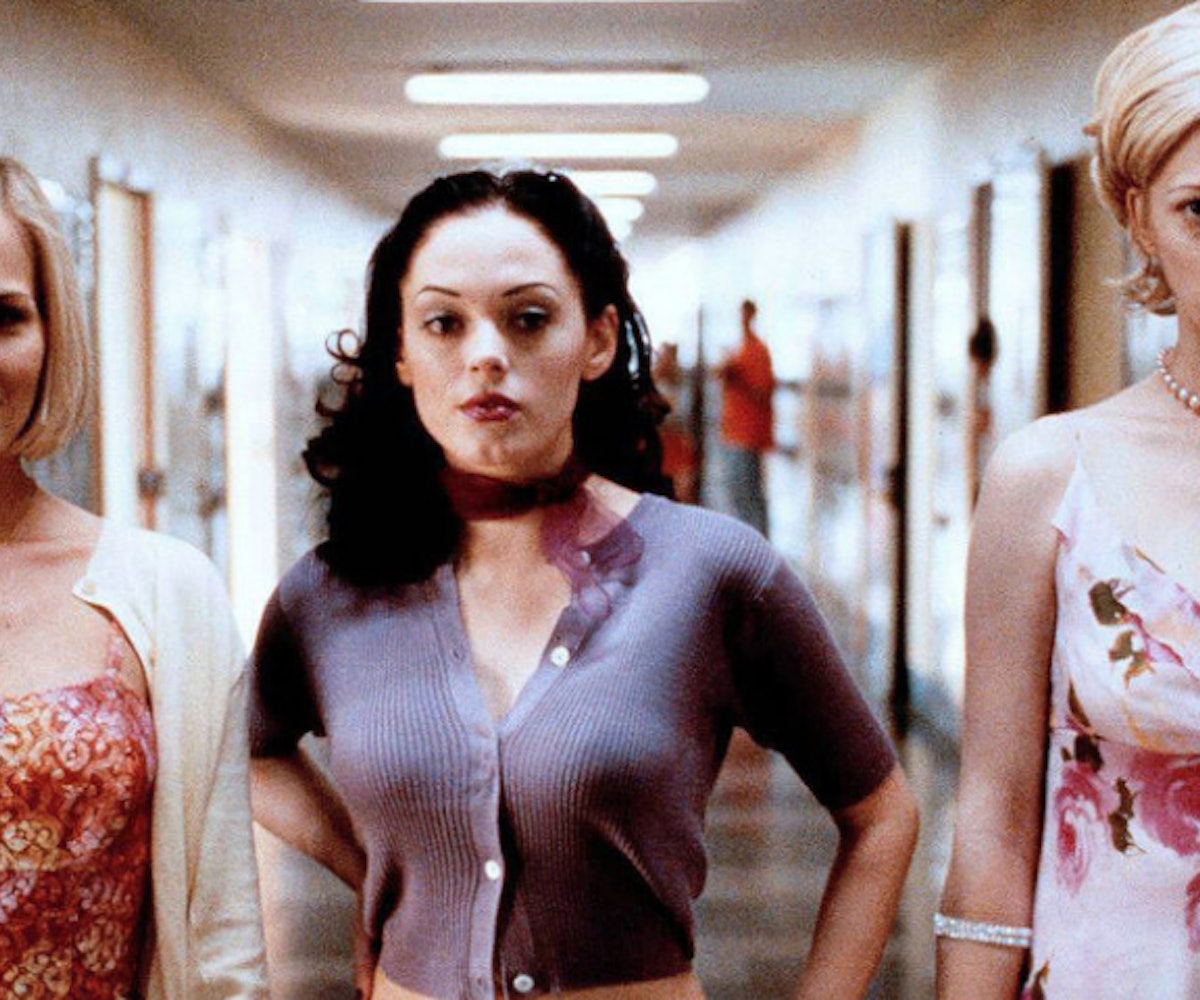 Jawbreaker, the 1999 Heathers-inspired high school satire, celebrates its 20th anniversary today. A critical failure that's gone on to become a cult favorite, the film is most notable for its perfectly coordinated and colorful fashions. Jawbreaker's far-fetched plot of devious high school girls and the fallout from a prank that leaves one of their clique dead makes for a pitch-black comedy wrapped in candy colors, and fashion is essential to the devious onscreen world.

The bad girl friend group of Courtney (Rose McGowan), Foxy (Julie Benz), and Julie (Rebecca Gayheart) strut the hallways in punchy, colorful, perfectly coordinated outfits. Like in so many high school movies, their friendship seems defined not by mutual feelings or kindness but a desire to outfit themselves in complementary looks.

Ultra-tight skirts, heels, spaghetti straps, crop tops—the fashions of Jawbreaker are a litany of dress code breakers, but, in the heightened world of the high school fun house, they make total sense, and bear enough resemblance to contemporary late-'90s looks (looks which, of course, are totally back) to be perversely covetable even if highly impractical.

Many of the outfits have a kitschy late-'50s/early-'60s vibe. A quick shot reveals the girls' back-seam stockings, and Courtney wears short-sleeve sweaters and headbands that wouldn't be out of place on a stylish sitcom wife of the era.

Fashion is used as an obvious device in Jawbreaker, never more so than with the character of Fern Mayo (Judy Greer). Fern is a goody-goody in terribly unflattering baggy pants and drab cardigans. Even someone who pays no attention to onscreen fashion could easily see the contrast between her and the mean girls.

Once Fern uncovers the murder, Courtney and Foxy take her under their wing in exchange for her silence. This being a '90s teen movie, Fern gets a makeover, and in this over-the-top cinematic world, her new look is such a change that she assumes a whole new identity, as a glamorous exchange student named Vylette. Vylette's outfits are classically girly, all in shades of pink, and become more ridiculous as her indoctrination into bitchiness progresses.

It doesn't take long for Vylette to wear wildly inappropriate outfits featuring metallic tube tops or crop tops that say "Bitch" to school. The silhouettes of Vylette's outfits, with tight pants, off-the-shoulder tops, and neck scarves, recall one of the most famous cinematic fashion transformations of all time: Olivia Newton-John's catsuit at the end of Grease. Jawbreaker takes things even further with borderline sickly colors and having the outfits actually be worn in the classroom.

Little in Jawbreaker bears any resemblance to the real world, but the sickly sweet '90s fashion on display remains covetable. The costumes wouldn't be out of place on Instagram today, and while you absolutely shouldn't emulate the behavior on display in Jawbreaker, you can't go wrong with some bright '90s colors, fun accessories, and ultra-femme silhouettes.