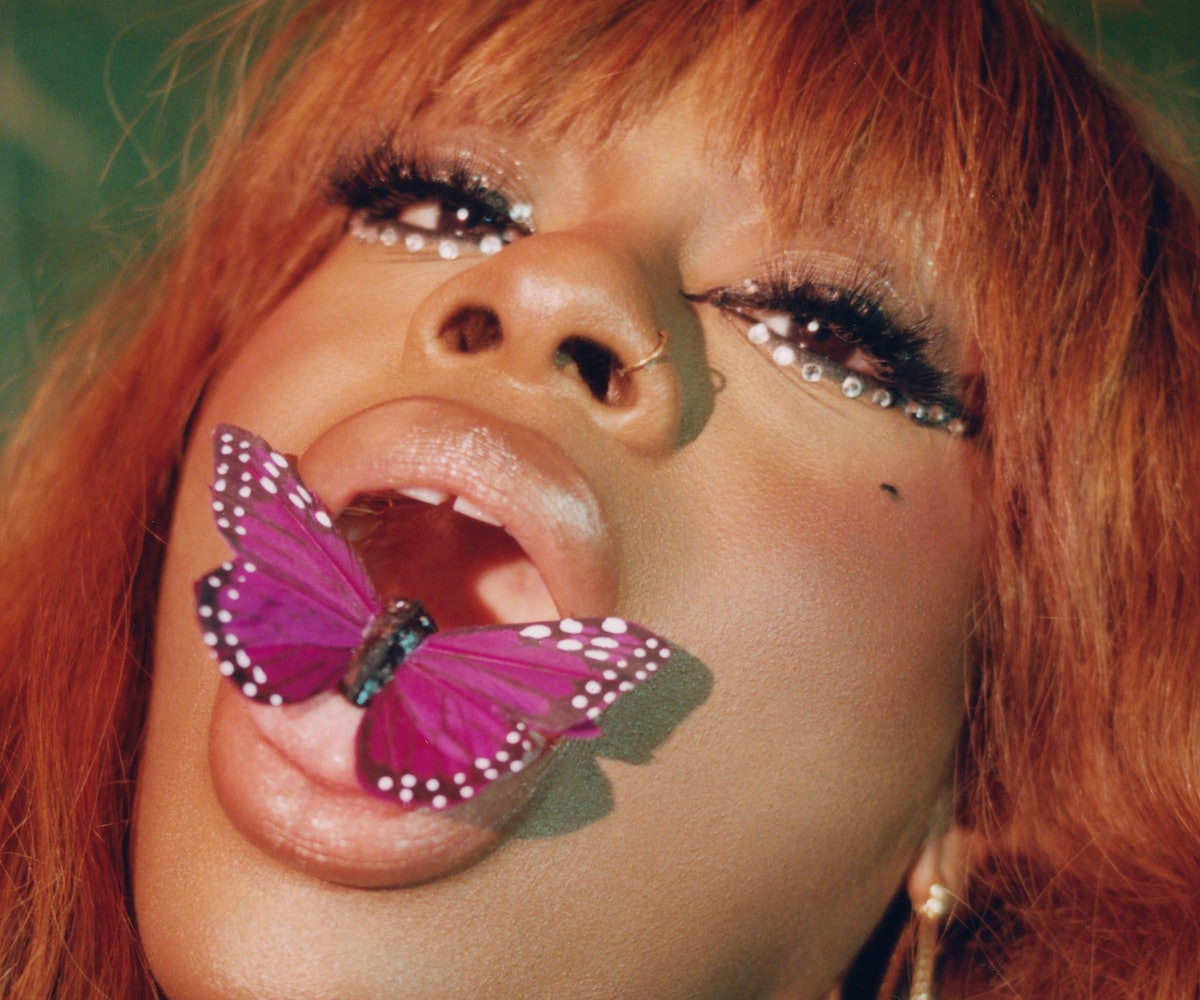 Just over a year since her last release, 2019's Cry 4 Help EP, Kari Faux is back in her groove again. Her latest mixtape, Lowkey Superstar— which NYLON is premiering in full on Tuesday — is a delightful package of the irreverent, braggadocios rap that colored much of her early work, from 2016's "No Small Talk" to 2017's Primary. Made over the course of a tight six days, Lowkey Superstar is a potent return to what the Little Rock, Arkansas-born rapper does best: digging into the frustrating knots of life and flipping them into cathartic, comical relief.

Faux, who now calls Los Angeles home, travelled to London to record the project shortly after finding a new friend and creative partnership in London-based producer Danio. Since initially getting connected through a mutual friend in 2019, the two have created a whole stockpile of new music, including a fully-formed album still waiting in the wings.

"That's how I kind of knew that it was meant to be, because it was like every song that I was making, it just felt like a lot of fun," Faux explained during a recent phone call. "Honestly, I haven't been in that space where music was super fun for me in a while. So, when I met him, I re-found my joy for making music."

And it shows in the songs. On the high-velocity "Look @ That," Faux mocks right off the jump, "You said I wouldn't be shit but now you all up on my dick," with a digitized ha-ha-ha-ha-ha filling in as an ad-lib. Elsewhere, on "Actors, Rappers & Wrestlers," Faux finds that common thread of fuckboi-ery between all three of the professions, pointing out, "All of 'em the same, the show never ends/ All you do is run around, you play and pretend." By the end of the 17-minute runtime, one gets the sense that Faux would've been done with these bozos long ago if only watching them flail wasn't so entertaining.

Speaking from her childhood home in Little Rock, we caught up with the rapper about how this project came together, her newfound creative partnership with Danio, and the worrying state of live music.

How are you feeling about your mixtape right now?

I'm really excited. I've been ready to get this project out. I finished it maybe in January. I was in London and recorded everything. The moment that I was finished I was like, I'm ready to drop this, like, today. So I was just trying to get all the art together and all the stuff prepared, so I've been antsy. I'm very excited about it.

No one could've ever predicted that you would be dropping it in the middle of all of this.

Yeah, it's so crazy to me because I've literally had the [release] date since last year. Cause I made another project and I was like, 'Oh, I wanna make a mixtape before I put this project out and I want to drop it in April.' So I already had my mind set on this particular time. And then for all this stuff to be happening, I was just like, well, I can't not put it out. [Laughs.] I do appreciate how it's making everybody think outside of the box creatively, that's the only thing that I like about this.

Tell me a bit about Lowkey Superstar. How did these songs come together?

I made the whole entire thing with one person, his name is Danio. He lives in London. When we first met last year, we instantly just hit it off and I was like, Yo, I wanna make music with you forever. I remember telling him I've always wanted to make an album in London and he was like, come to London — and mind you, essentially he's a stranger to me. So I go to London, meet with this stranger, he ends up letting me stay at his apartment. He goes to stay somewhere else, he lets me have his apartment for three weeks while we make an album. After we finish the album I was like, Oh, this album is great but I feel like we need something in between my last release and the album. So we kept working and then it just ended being a mixtape.

The songs were just really fun. That's how I kind of knew that it was meant to be, because it was like every song that I was making, it just felt like a lot of fun and honestly, I haven't been in that space where music was super fun for me in a while. So, it was kind of like when I met him, I re-found my joy for making music.

Tonally, this project is much lighter than your previous one, Cry 4 Help. How do these two compare to one another?

I think [Lowkey Superstar] is a lot more fun, but Cry 4 Help was meant to be... I feel like to get back into this space, I was just going through a lot of shit that I couldn't ignore. So it was kind of like, alright, let me just make music about it and kind of get it out of my system. So now, it is like a 180 sonically, but I also feel like in order for me to be where I'm at, I had to have Cry 4 Help to be as confident in who I am, and just accept the traumatic or darker parts of myself, the things that have happened in my life. Now I'm just confident in who I am and what I've been through. I'm not ashamed or any of that. So now it's like, alright, it's time to have fun. We're past that.

One of my favorite tracks is "Actors, Rappers and Wrestlers." How did that come together?

I was freestyling, I had made this little beat. It had piano keys, it had a drum pattern, and I was just freestyling to it. At the time I was just in my feelings because I was dating this rapper or whatever, if you can even say that we were dating, I don't know. But things had kind of ended. So I was freestyling about how you don't really know when they're putting on a show or when they're not. It's the same with actors, you know, it's the same thing, and it's like, Who are you? They put on these different masks that could mean different things to all the people in their life. And they're just so macho. Rappers, actors, and wrestlers are all like, Oh, I'm the man, I'm the center of your solar system. Like, no you're not, but OK.

A lot of artists currently are really concerned about what live music is going to look like after the pandemic. Have you given that much thought?

Well, yeah, I have. I was having this conversation last night about how everything's going to be so backed up, in terms of booking shows, because there's just so many tours that have been postponed or cancelled that will probably be rescheduled for later. But then you think about it, everybody's tour is getting rescheduled at the same time, it's going to be super hard for fans. People will have to balance out what they want to pay for and what time. I think it's going to be really hard for the fans to be able to choose and it will also be hard for the artists. There's going to be a lot of competition around the scheduling of tours and stuff. And then also just being ... afraid to go and congregate again. I think that is a huge concern. Of course if we get the green light to go out and do stuff, I feel like everybody's still going to have that little fear in the back of their mind like, Oh, I don't wanna get too close to people.