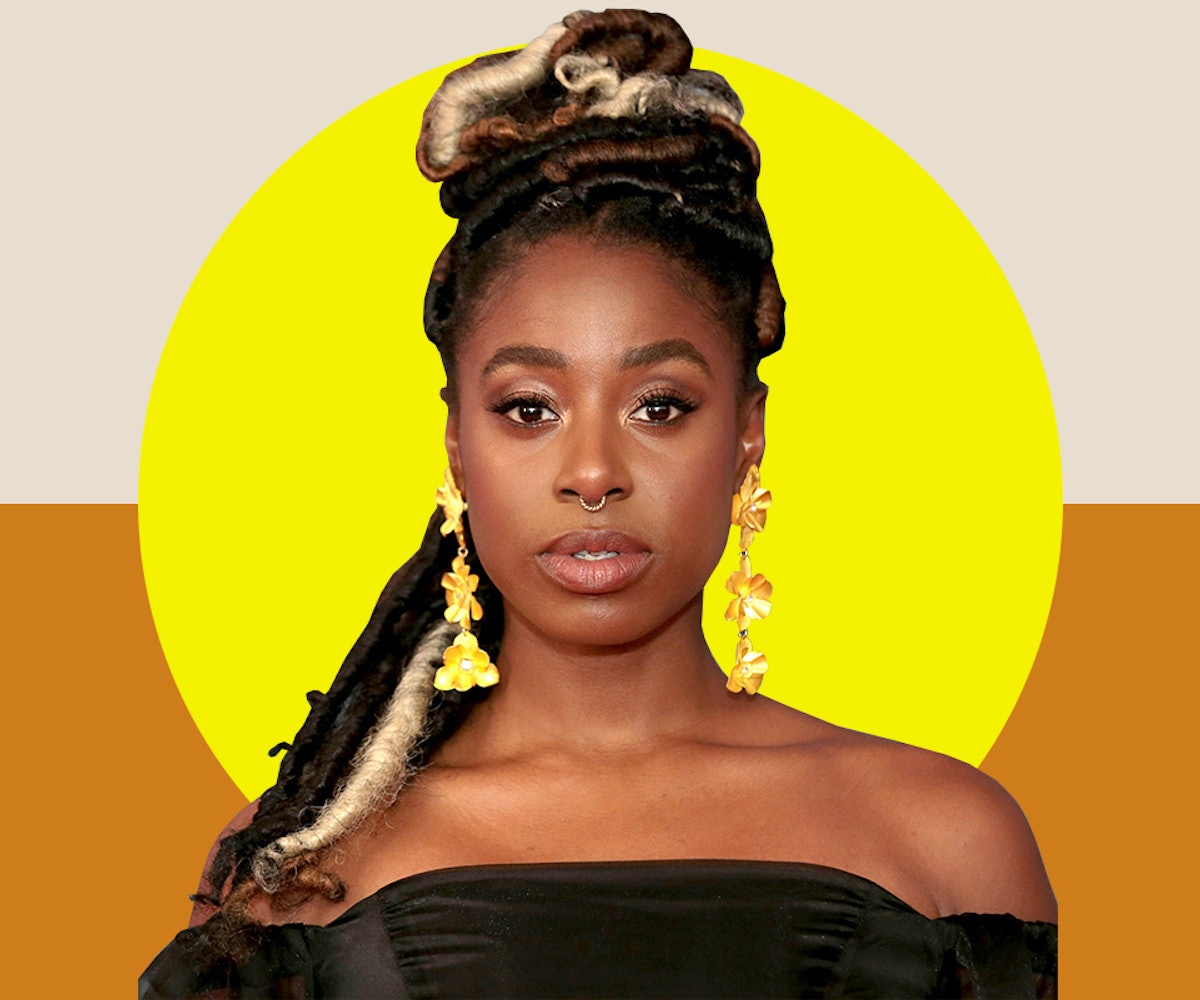 Kirby Howell-Baptiste credits her skill of selecting the kind of roles that quickly become fan favorites to "part fortune, part pickiness." It doesn't hurt that pretty much every one of the projects she's worked on—from The Good Place to Killing Eve to Barry to the latest season of Veronica Mars—have also managed to cut through the crowded TV landscape and become hits.

"I think a lot of people were like, 'You're everywhere, you're on everything!' But it's just that I was fortunate enough to be on these shows that people really responded well to and actually saw," Howell-Baptiste tells us. But it's the way she brings her characters to life that plays a part in their popularity, too. There's Sasha, the British wannabe-actress on Barry; Elena, the slick-talking, witty assistant to Sandra Oh on the first season of Killing Eve; and Simone, the brilliant neuroscientist with possible ulterior motives on The Good Place (she'll be back for Season 4, don't worry). All three have landed the actress on "New Faces" and "Rising Actresses Poised To Rule Hollywood" lists. And if you've seen her most recent work as Nicole, a badass bar owner with an impressive right hook, on Hulu's revival of Veronica Mars, it's easy to see why she belongs on all those lists.

When Howell-Baptiste was a kid, she wanted to be three things: a teacher, a lawyer, and a hairdresser. That's right, she didn't want to just be one of those things, she wanted to be all of them. "These are the professions that I saw around me, and so I was just like, These seem great," she says. Becoming a teacher sort of happened: She worked as a teaching assistant during her gap year with kids who have autism, which she admits is "a much harder job than I do now." But that wound up being an anomaly. Howell-Baptiste's professional dreams had actually shifted when she was just 10 or 11, and first attended a community theater center. "We were doing improv and dance and acting in these little scenes, and everything shifted after my first day," she says. "It almost seemed like destiny. Like, That's what I want to be, I want to be an actor, so I'll figure out how to mobilize the things in my life to achieve that. It kind of just seemed simple."

In 2011, she moved to Los Angeles from London on a student visa. She was in a long-distance relationship at the time and moved to be closer to her partner—not necessarily to be closer to Hollywood or even to her childhood dream. "At the time, I wasn't super starry-eyed about L.A. It wasn't a situation where I was like, This is where it's going to happen. It was sort of like, This is the place I want to be for another aspect of my life, and luckily enough, it happened to be a place where I could do what I want to do," she says. "But, at the time, I was so young and so in love that I would've moved anywhere. If not L.A., it could've been Alaska."

But it was Los Angeles where she would eventually start taking classes at the comedy hotspot Upright Citizen Brigade; meet future stars, like Saturday Night Live cast member Ego Nwodim and D'Arcy Carden, who plays Janet on The Good Place (and also has a role on Barry); and land her first co-starring role. L.A. quickly became the place that Howell-Baptiste would call home for the next eight years and that would open up a world of opportunity.

Though her career has been leading up to this, Howell-Baptiste says her sudden fame has been somewhat whiplash-inducing. "It definitely hit at the end of last year, some beginning of this year, because all the shows got recognized at the same time: Barry, The Good Place, Killing Eve," she says. "It was kind of like, What? Huh? How did this happen?" In proper British fashion, she's also not one to complain about the current buzz surrounding her, but she says what's more important is what comes next. "I think it's really nice to have headlines and superlatives, but I think that my work will speak loudest for me. I'm a firm believer that the proof is in the pudding, and I think that, for all this stuff, time will tell. And I hope these things do come true, but they're obviously not gonna happen with me just sort of resting on my laurels."

More than anything, Howell-Baptiste is grateful for the new platform these roles have given her. "I think what's exciting is feeling like I've been given a launchpad from these shows, and then sort of being visible," she says. "So now I'm thinking about what the next exciting thing that I work on is going to be. And not necessarily the thing that people talk about, but: What's the next script that appeals to me? What is something that I would want to watch even if I weren't on it?"

Howell-Baptiste lists Viola Davis, Meryl Streep, and Regina King as examples of women she admires, and who have a robust number of roles under their belts, both big and small. Even if for some, as is the case with King, they're just now being recognized for their work in a substantive way. It's Olivia Colman, though, who she says she'd most like to mirror her professional journey after. Looking back on her fellow Brit's career, Howell-Baptiste says: "She did Peep Show [a U.K. sitcom], which is so funny and so dry, and then she did this indie film called Tyrannosaur, which is absolutely heartbreaking. I think someone who's able to go back-and-forth so seamlessly between comedy and drama, that's something that I would want to do my whole life."

First, though, she'd like to do some writing and concentrate on her own projects which she describes, tonally, as being "grounded in real emotion and real character and can be really, really absurd." Somewhere between Killing Eve and Baskets, she says, is where she'd like to land. "I think you reach a certain point where, at least for me, I'd like more control over the process—the writing and the development of the character," she says.

Howell-Baptiste is lucky though, she's been on shows that are incredibly well-written—often so much so that she gets envious of the actual writers. But, she adds: "I also think that, if I'm honest, I think particularly as a woman, and even more so as a woman of color, it's so rare that you're given opportunities to be in roles that you feel like are completely true and completely honest and also really represent you. And I think that's why it's up to us to write our own stories."

Veronica Mars is available to stream on Hulu now.