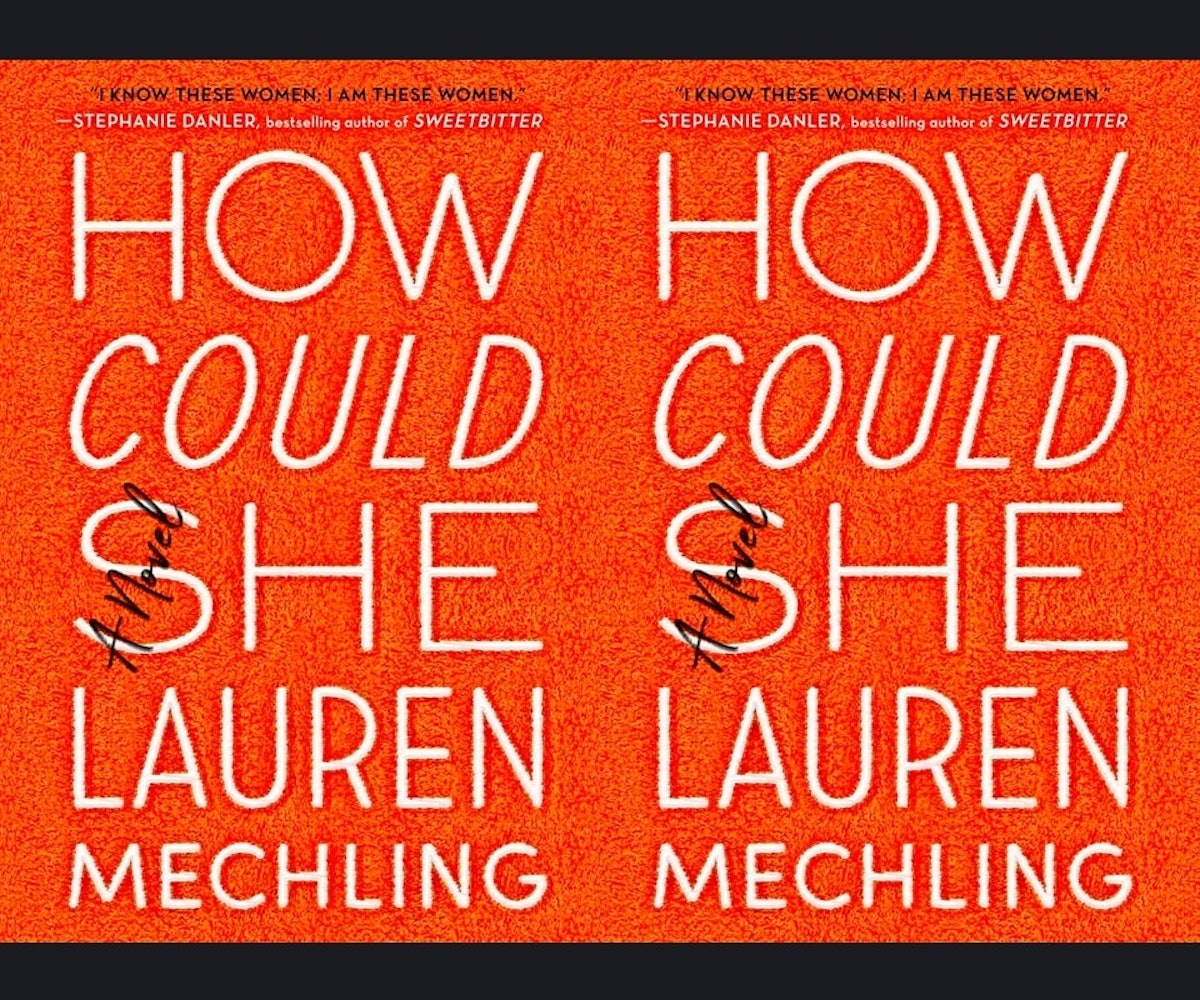 "There are no laws attached to friendship," Lauren Mechling told me. We had met to talk about her new novel, How Could She, a comedy of manners that takes place throughout a year in the life of three friends—Geraldine, Sunny, and Rachel—whose ties to one another unravel and form again, taking new shapes, and reflecting the transformations of their ever-shifting lives. And what Mechling makes clear, to often devastating, reliably hilarious effect throughout the novel, is that although friendships lack any kind of codification—and, in fact, precisely because of this—they overflow with transgressions, as we overstep the boundaries that feel like they're constantly moving, designed to trip us up, to disrupt the fragile ecosystems that comprise our social lives.

And! Speaking of fragile: How Could She is not just set within the tenuous triangle of Geraldine, Sunny, and Rachel's friendship, it's also set in the fraught world of New York media, where it's similarly difficult to know where you stand. Mechling, who is a contributing editor at Vogue, is very familiar with the ins-and-outs of this particular professional milieu, and uses it to great effect within the novel, allowing it to serve as a sort of funhouse mirror reflection of the ways in which precious few of our most valued connections, whether personal or professional, can be relied upon with any consistency. "Like the floor just keeps dropping out, right? The wheels keep flying off," Mechling told me of the media industry. "And yet, the bus keeps edging toward the destination. It's very strange. And there's a comedy to that, too."

Finding the humor—and the pathos—within not just the media industry, but also intimate female friendships, has been fertile ground for novelists (and for films and TV shows and theater) for quite some time now—not least because these kinds of relationships have a peculiar duality: Our closest female friendships are essential, and yet possess an acknowledged transience. We know, as we grow older, that as meaningful as these relationships are, they will naturally take the backseat to romantic relationships, to relationships with our children, to relationship with our careers, to our relationships with, you know, ourselves, because those are the things that give life a foundation and direction; they're the things we can't lose touch with, can't put off for another week, as we do with our friends.

But it's precisely because friendships are so volatile that they are so precious; and then too, our friendships remind us not just of who we are, but of who we have been, something that's particularly important as we figure out where to go next—though the question of whether or not the friendship will come along is always a matter of debate.

"Any friendship that lasts longer than a day is going to be troubled by the fact that friendship is this unstable compound and friendships evolve," Mechling said. "But also, the two sides of friendship between two women, their stories both will change over the course of time, and generally not keep pace with each other; there's generally setbacks and plot twists."

And all three of the women at the center of How Could She experience major plot twists, and the kinds of reversals of fortune that happen all the time in real life, and inevitably lead to a frenzy of texts being sent to everyone in your general friend group, all asking a variation of the same thing: "How could she?"

Geraldine, Sunny, and Rachel met in their 20s, while working at a magazine in Toronto; they're now all in their late 30s, and find themselves at points in their lives that they recognize as being wildly different, though they would probably seem roughly similar to anyone peering at their friendship from some distance. This means: They all still work in media, but Rachel is now married with a young child, frustrated with her stalled career as a young adult novelist, and all-too-aware that the magazine she works at is threatening to fold; Sunny is also married, but is wealthy and glamorous and has done that rarest of things in maintaining her credibility as an artist while also being commercially successful; and then there's Geraldine, the last one standing in Toronto, who has broken off an engagement and landed in New York to make a career for herself in podcasting.

"I feel like delusion is something that fascinates me," Mechling said. "And that's what plays a big part in this story. The characters are also all somewhat delusional. And then sometimes those dreams end up manifesting, perhaps because they've been nourished." But, she continued, "I think in terms of friendship and how people are honest or dishonest with each other, there is something that fascinates me about women and female friendship in how vulnerable we are around each other."

Throughout the novel, the women all have moments of openness with one another, but what's far more notable is how protective they are of themselves, and how clearly they see that any perceived weaknesses might lead to them losing a certain kind of stature in the eyes of their friends. Unlike narratives that make female friendship seem like a relentlessly positive thing, absent the complications of romantic partnerships, How Could She makes clear all the ways in which our friendships are full of lies and insecurities and a resistance toward the very intimacy we claim to have, or, at least, pretend to want—the darkest of romances.

Mechling said, "I think we see so much into each other that I think perhaps giving everything that you have in your head is sort of like wearing sunglasses in blinding light. It's a way of protecting ourselves, because when a woman rejects you, it's so painful... we do give so much of ourselves, and we see all of our dimensions, and we see the ugly sides very clearly, with such granularity, that I think there is an impulse to hold back a little bit. Even if it's not possible."

This isn't to say that this novel is a condemnation of friendship—it's not. Rather, it's a clear-eyed look at the way it does and doesn't work at times, and a commentary on how capable we all are at pretending everything is fine when we're standing in the middle of a fire. And, that fire could be the media landscape, it could be a loveless marriage, it could be a floundering career, or it could be the need to move from New York to Toronto, but whatever form your personal disaster takes, it's all too true that there's the impulse to hide its contours, even from our friends.

Perhaps what's most striking about How Could She is the way in which Mechling has written a novel that is simultaneously about connection and alienation, unspoken social codes and explicitly laid out (if often transgressed) rules of interpersonal engagement; she gets perfectly at the chaos of trying to maintain consistency in a world that isn't built for it, a world that laughs at you once you've gotten to where you think you're supposed to be. "When a state of what feels like purity and happiness is reached," she said, of friendship, "that's imperiled by the fact that things are definitely going to be different come a year—and then two years and 10 years."

And yet, that doesn't mean it isn't worth working on these friendships—or, say, moving to New York, and trying your hand at podcasting—or doing any number of things that may or may not result in what you'd initially predicted you'd wanted out of life, but that will still take you somewhere new. This, anyway, is how things end for Geraldine, Sunny, and Rachel; they're all headed, in one way or another, to new stages of their lives, still friends, whatever that means.

How Could She is available for purchase, here.