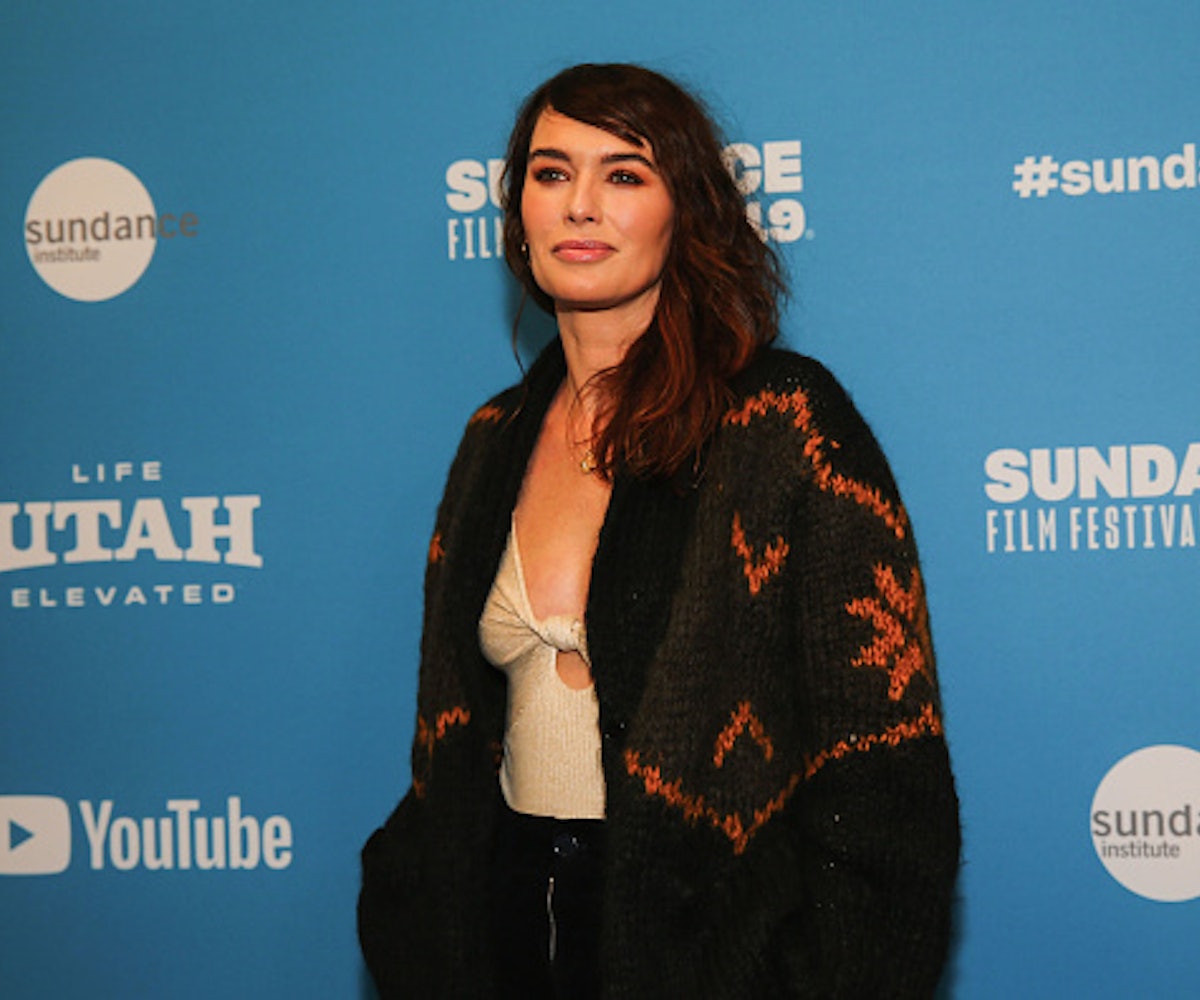 By the time I walked into the Midtown hotel room to interview Lena Headey about her role as wrestling matriarch Julia Knight in Fighting with My Family, the new biopic about WWE star Paige (played by Florence Pugh), I had already spent a good 30 minutes reminding myself over and over to not lead off with a question about her role as Cersei Lannister on HBO's Game of Thrones. And, really, it shouldn't have been so hard to avoid. After all, in FwMF, Headey is dynamic and hilarious and tender as Julia, more than holding her own against comedy legend Nick Frost, who plays her husband, Ricky Knight, and giving real depth to Julia, who isn't onscreen all that much but whose love for her family—both nuclear and the one she created in a humble wrestling gym in Norwich, England—radiates throughout the film.

And yet, as soon as we start chatting, and she starts talking about missing her children after so much work travel ("tomorrow I go home to my children, and I glue myself to them"), I can't help but think not of her real-life children (a daughter, four, and a son, nine, who, Headey says, she calls "the land squid," because he's "long and lanky and loves to run at you without notice"), but of her children on Game of Thrones, the ones that [spoiler] all die horrible deaths. And so I say, "It must've been nice to play a mother whose children don't all, you know, die horrible deaths," to which she smiles and arches an eyebrow and says, generously, "right," and I sighed a sigh of pure relief, because I'd gotten that out of my system.

Because, yes, other than Cersei and Julia both having three children, they have nothing in common—except, of course, that they're both survivors. In fact, Headey has a gift for playing women who survive against all odds, whether it's Mary in The Purge or Queen Gorgo in 300 and its sequel. No matter how different these women are from one another, they share Headey's innate strength; there's an undeniable tensility to her performances, you can see how she's the kind of woman who can hold together a family, no matter the odds against them.

But while Headey is excellent in her dramatic roles, it is a gift to see her do comedy, if only because it so perfectly reflects her real-life presence, which is warm and funny. She is quick to crack jokes (when I asked her what her wrestling persona would be known for, she said, "farting; I would just keep farting as I made my way into the ring, and scare everyone off"), and a pleasure to be around. Below, we talk about how she got involved with this film, why wrestling is like acting, and how nice it is to be in a film without a "snogging" arc.

What first got you involved with this movie?

I'd first seen the doc [The Wrestlers: Fighting with My Family] years ago—'cause I watch a lot—and I loved it and [the family], and this arrived like 10 years later and I was like, Oh my god, they're going to make a film of the Knight family. So I was excited.

Although the film centers around Paige's experience specifically, every character is so fully realized, which I think is one of the things that makes it so special. What did you like, specifically, about playing Julia?

I researched her quite a bit, and I looked into her, and you look at her, and you're like, There's a story. And so I started looking at interviews, and she's had a journey, this woman; she's a survivor, and I just have huge admiration for someone that's taken what life has given her and made it something she's proud of; she's built a unit, and that is the most important thing to her. And everyone you speak to loves [Julia]. I spoke to a lot of her wrestlers, and there were a few on the film that were our extras, and they all just call her mom.

It's a really wonderful demonstration of the power of the family, both nuclear and created. And to the power of physical intimacy, not in a sexual way but the way that just being up close to someone forges bonds, as it does with wrestling. It feels like a testament to these elemental things. Did it... make you want to give wrestling a try?

No! [laughs] We only got to do one fight, me and Nick, and it's just total teamwork and hard work making it look unchoreographed. If you miss those little moments, you're really going to injure your partner.

It seems like it was such a fun film to make, with the camaraderie radiating off the screen. How was filming with such comedy icons [like Nick and Stephen]?

It was great. I'm in huge admiration of Florence and Jack [Lowden, who plays Paige's brother, Zak Knight], who are just brilliant actors. And Nick is just a genius, a comedy genius. I was really intimidated when we first got there, I was like, Oh, fuck, how am I gonna be funny? He's amazing. And Stephen, obviously. And it's just the kind of thing that you have to fall into and trust that they'll hold you somewhere, these men that are great at that aspect of everything. But we met and rehearsed for a few days, and it was pretty instant actually, that we were just like, Ah, we're a family. And then we wrestled, which brings you even closer, literally. Not necessarily always as close as you like. I can identify them all by smell.

That's real intimacy. Are you interested in doing more comedies?

You were hilarious, even though yours is more of the straight-man role.

When people come out [of the movie] and go, "You were funny," I'm like, Phew.

It must have been intimidating to be partnered with someone so masterful at comedy.

Part of me is like, there's no competing with this, because then it just becomes a competition, instead of just a true relationship, and they are truly in love.

They really are, and what's kind of amazing is it's the only love story in the film, really. And how rare is a film with a female protagonist that doesn't also involve a romance plotline?

But instead, the love is more of a generous, all-encompassing love, nothing feels forced.

Yeah, I think it really honors who the Knights are, it doesn't laugh at them, it doesn't turn it anywhere that it doesn't need to be. It's like they are: authentic and honest.

Fighting with My Family is in theaters now.