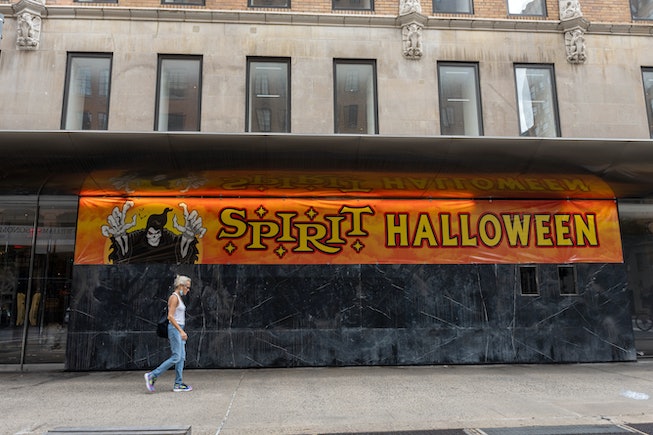 The scariest thing about Halloween is the deluge of Spirit Halloween stores popping up in the abandoned malls brought on by suburban decay. Spirit Halloween is a fever dream of a business, which, in a climate change-ransacked world, marks the changing of the seasons more reliably than the weather. This year, fans of the cursed-in-every-sense-of-the-word store got to see it confirm its strange cultural relevance after it set up shop in the abandoned former Barney’s in Manhattan.

And now, Spirit will be forever immortalized in a new adventure film called — wait for it — “Spirit Halloween,” starring Rachael Leigh Cook and Christopher Lloyd, as reported by Variety.

“When a new Spirit Halloween store appears in a deserted strip mall, three middle-school friends who think they’ve outgrown trick-or-treating make a dare to spend the night locked inside the store Halloween night,” reads the logline. “But they soon find out that the store is haunted by an angry evil spirit who has possessed the creepy animatronic characters. The kids embark on a thrilling and spooky adventure in order to survive the night and avoid becoming possessed themselves.” Um...kids encountering real-life horror in an abandoned Sears? This is all I want to watch, ever.

Up and comers Donavan Colan (Zoe), Dylan Frankel (Raven’s Home), Jaiden Smith (Blue Bloods), and Marissa Reyes (also of Raven’s Home) will also star alongside Cook. Longtime Hollywood veteran Marla Gibbs of The Jeffersons will also have a role. It’s unclear who will be playing the spooky Grim Reaper on the store’s memorable logo, however.

Notably, or maybe unsurprisingly, the film has secured a promotional partnership with Spirit. While a few movies does not a trend piece make, it’s also worth noting that there are other films in the works that rely on well-known brands as a kind of built-in marketing ploy, including a Greta Gerwig-directed Barbie movie starring Margot Robbie and Ryan Gosling as Barbie and Ken, in the roles they were born to play, a Polly Pocket movie starring Lily Collins and written/directed by Lena Dunham, and an animated Play-Doh movie.

I have a lot of questions about this film, and luckily, we won’t have to wait long for them to get answered: production has wrapped and it’s set for an October 2022 premiere.