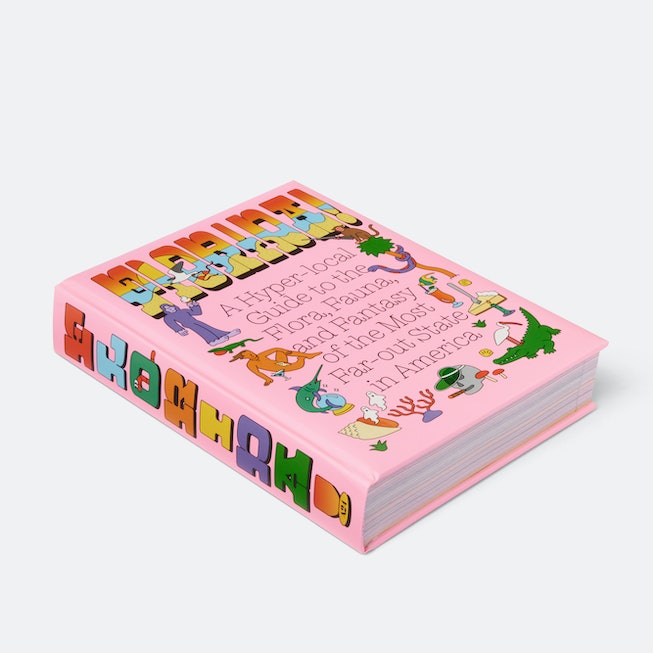 Florida has always had an intoxicating aura, like a twinkling neon green light that emerges from a radioactive swamp, beckoning for you to stare. The Sunshine State has long been the muse of A24, which has set four films there — Moonlight, Spring Breakers, The Florida Project, and Zola — telling strange stories that following the unexpected corners and people who make the state what it is, told in vivid, gorgeous technicolor. Now, A24 is passing the mic to writers and artists from Florida to tell its story, in the new coffee table travel guide Florida! A Hyper-local Guide to the Flora, Fauna, and Fantasy of the Most Far-out State in America, which is out August 31.

The book was edited by Gabrielle Calise, who has served as the the culture and nostalgia reporter for the Tampa Bay Times for the last four years. Calise grew up in Florida and was in high school when the studio was filming Spring Breakers, which takes place in her hometown of St. Petersburg, where she would try to sneak onto the set to spot glimpses of Vanessa Hudgens.

“I thought it was cool that A24 wanted to pass the mic to Floridians and let them have the ball,” Calise tells NYLON. “This book is rally getting into the corners of Florida and covering stuff you might not know otherwise.”

The content skips over the Disney Industrial Complex and goes deep on the Floribama shore; nudist colonies in Pasco County; Jules’ Underwater Lodge, a swim-up hotel; Paradise Park, one of the first resorts in the U.S. run by people of color, and the history of the Miami vs. Tampa fight over the Cuban sandwich, all in gorgeous, clean-line illustrations in Pepto pink and lagoon blue by Miami artist Gabriel Alcala.

The book covers the state from north to south (there’s an adage that, when it comes to Florida: the more north you get, the more Southern you get) from the Panhandle to the Keys across 500 pages, exploring orange groves and alligator farms and underwater pizza delivery and St. Petersburg’s Gay Commit Skate Crew alike.

“Every time something comes out about Florida, I wanna see what unique spin is going to be put on it. I think A24 does a good job of a range of stories that are more emotional, with deep plots that run through films that are also flashy and fun and colorful. People might come because they see these insane promotional materials for these films and they walk out and there’s more to them. I wanted to do the same thing with the book,” Calise said. “There’s a lot that’s whimsical and goofy and there’s depth and surprises, and every time I’ve seen an A24 film about Florida, I’ve waked away with the same thing. It’s more this fascination with Florida that everyone shares because it’s such a fascinating and strange place.”

Some of the reporting was also inspired by The Florida Project, with sections dedicated to the history of the Twisty Treat ice cream chain and the not one, but two, giant wizard head souvenir shops.

It’s a project made by tried and true Floridians, with other contributors like Florida podcast historian Nick D'Alessandro, Ashira Morris, who covered traditions like chucking dead fish at the annual mullet toss, roadside attraction expert Kathryn Varn, Jason Katz who writes about cypto zoology and myths, and The Florida Project’s own Brooklynn Prince.

“National media has flattened the state’e complex history and stories into ‘Florida Man Arrested for Trying to Get Alligator Drunk’ headlines, which only focus on the tragic part of the state — and none of its magic,” writes fifth-generation Floridian Tyler Gillespie is in the introduction. “Florida might have its fair share of drunk alligators, but, as you’ll see in this book, the Land of Flowers has many more brightly-colored blooms.”