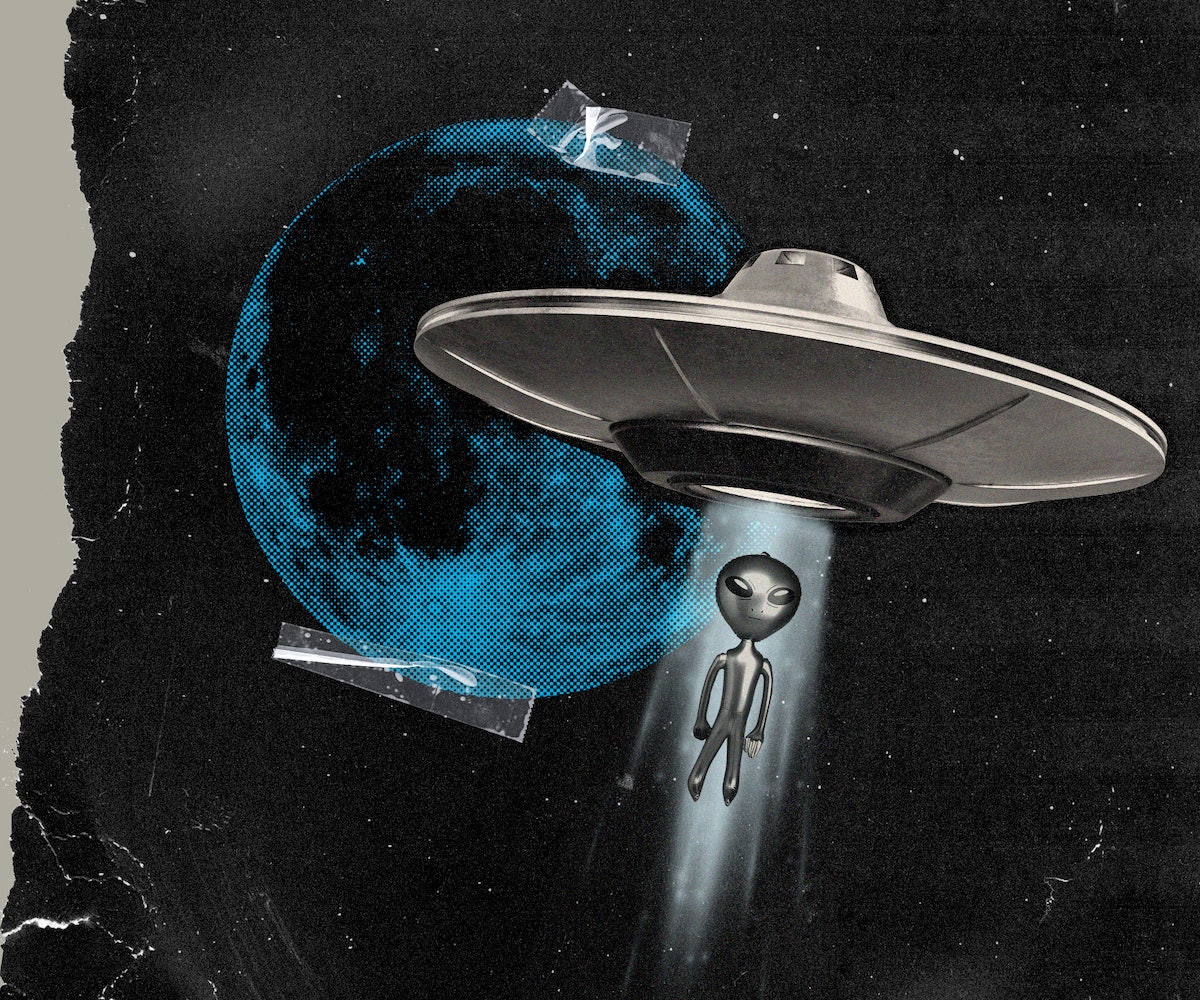 In late June 2021, U.S. Intelligence formally disclosed over 144 recorded sightings of UFOs — known now as UAPs, Unidentified Aerial Phenomena — revealing not any definitive proof of life beyond our atmosphere, but a reliable dearth of knowledge down below. After decades of denial, the powers that be have admitted, in no uncertain terms, to near-total uncertainty. Whether our visitors from beyond choose to reveal themselves outright, they’ve unveiled a bigger shift in power here on Earth, charted by the stars they’ve likely crossed.

The saga of a benighted world and its dreams of salvation (or annihilation) begins and ends in Capricorn. It is here that the generational planets — Saturn, Uranus, Neptune, and Pluto — have wrought a 30-year saga that is fast approaching a close: beginning at the dawn of the ’90s, at the explosion of alien kitsch, and culminating at the current moment, when the extraterrestrials become legit, and the human gatekeepers give in.

As the first sign of the winter season, Capricorn concerns itself with management, survival, and longevity — namely, the tasks of governance and the inevitable hangups of power and surveillance. And so, when three major planets came into a rare triple-conjunction in Capricorn in the late ’80s and early ’90s, aligning ever so nicely, sh*t was bound to go down. The players involved the commanding the outer planets: Saturn, god of order, dominance and structure; Uranus, the young and fervent revolutionary; and Neptune, ruler of dreams, imagination, and intoxication.

In Capricorn, the clash of these archetypes unleashed a seismic shift in the power structures onto which society clung. Saturn brought down the Iron Curtain, apartheid, and the organizing fear of nuclear annihilation. Uranus, the queer planet, went to work on new technologies, blowing up the doors of the beyond. The 1990 launch of the Hubble Space Telescope changed our understanding of the universe forever. Meanwhile, the deployment of the world wide web and quantum advances in video games initiated a tangible reach into a new, shared reality.

In his astrological history Cosmos and Psyche, Richard Tarnas writes that with “these impulses and developments at work, a certain quality of spiritual expectation concerning a shift in the ages seemed to be overtaking the collective psyche.” But a more unified consciousness was destined for disappointment, in a social order of corruption and consumerism. The luminaries of the age fell hard, with the deaths of Kurt Cobain and Princess Diana, the trial of O.J. Simpson, and the Clinton impeachment. And so crept in Neptune’s dark side, a bitter disillusionment and desire for escape: through synthetic drugs, video games, pornography, rising evangelical mega-churches, and compound cults like Heaven’s Gate and the Branch Davidians.

“With the planet of the underworld exhuming secrets and lies from the White House, Hollywood, and beyond, the truth was no longer out there but everywhere, and anyone with internet access could become a Reddit-era Fox Mulder.”

Is it any wonder, then, that in a decade of such epochal change, the noise of UFOs, raging in some form since the dawn of the Cold War, came to a manic scream? This world proved to be as much of a letdown as ever, and new realities and star systems abounded. Get us out of here! As the planets moved into Aquarius, the sign of new technology and dissemination of information, by the mid-’90s, the truth was suddenly out there, everywhere: The X-Files, Contact, Independence Day, Mars Attacks!, and Roswell. By the time The Matrix shifted the discourse on alternate realities in 1999, it was a welcome respite, and a chance to deflate our blow-up green alien men from Urban Outfitters.

And then, for a decade, the dissociation won, and the wizard, once exposed, somehow reclaimed his seat behind the curtain. Y2K didn’t pan out. The flying saucers never landed. Girl Power died. Bush won two terms. The world didn’t change, and those in power only consolidated more of it. But in 2008, the Capricornian saga entered its final act, as Pluto, the destroyer, moved into the sign of the goat for the first time in over 200 years. Pluto’s transit of the sign, from 2008 to 2023, would force a breakdown of any surviving mechanisms of state control: the economy, the police apparatus, and the political leadership. With the planet of the underworld exhuming secrets and lies from the White House, Hollywood, and beyond, the truth was no longer out there but everywhere, and anyone with internet access could become a Reddit-era Fox Mulder.

By the time Saturn joined Pluto in Capricorn, in December 2017, just weeks after the Harvey Weinstein bombshells and a year into the Trump presidency, the culture was braced for a season of revelations. That month, when pioneering UAP expert Leslie Kean co-published a front-page New York Times exposé, uncovering years of buried Pentagon intelligence on “advanced aerospace threats,” there was no need to shove the green men to the fringes. When Neptune, Uranus, and Saturn moved through Capricorn in the ’90s, the truth expanded too far and too fast. With the arrival of Pluto and Saturn, the dark rulers, into Capricorn, the truth broke.

As the ruling elites admit that they have never really known anything about what could be circling our skies, we enter our own final orbit. Pluto is upon us to force a relinquishment: In February 2022, the destroyer will pass its original position at the Declaration of Independence, initiating America’s first-ever Pluto Return. An end, or a new beginning, is here. Does this portend, finally, the great arrival?

Only if we pay heed to Pluto’s wrath and bring the simulation all the way down. So long as we believe that this is all there is, that the rules of success and survival laid out for us are infallible, we won’t be ready for them. But, if we can let go the dependence on this planet’s rulers and come up from kissing their boots, we may find ourselves looking up to the skies, at a new world landing.