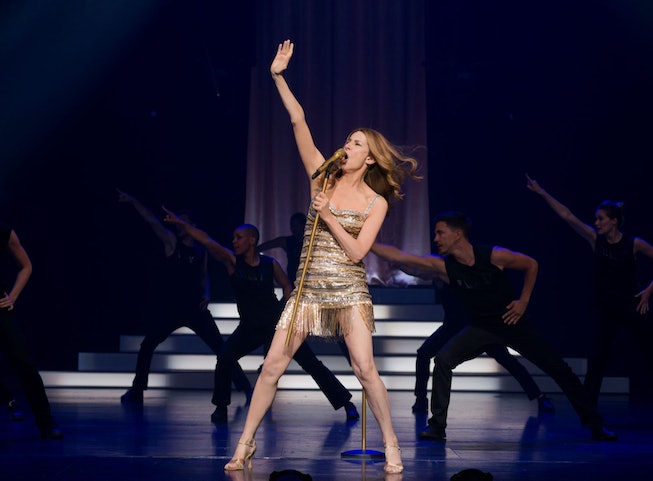 For most of us, Celine Dion will forever be most known for “My Heart Will Go On,” the Titanic theme song that she recorded in one single, perfect take. But the new, unauthorized biopic Aline, written, directed by, and starring the French actor Valérie Lemercier, sheds light on the lesser-known parts of the pop diva’s life, a life where “My Heart Will Go On” does not play a starring role.

Born the youngest of 14 children in Quebec, Dion was already a household name outside the U.S. by the time she was 14. When we think of pop divas, Dion often doesn’t come to mind – partially because she’s kept most of her life private. But the other, more likely reason, is because she never publicly battled addiction, depression, divorce, or anything most celebrities of her caliber have had to endure in the public eye.

“When you are making biopics, it’s often about the dark side of somebody and this depressed thing, and it was not the case with Celine, and I liked that,” Lemercier told NYLON over Zoom. For her, the greatest part of Dion’s tale was the story of her and her first and only true love René Angélil, whom Dion met when she was 12 and he was 38.

The film is a chronological telling of the singer’s life as a savant child through her marriage, the birth of her first son, the weeks she was put on vocal rest, and her life performing sold-out shows in Vegas each night, where she had a longtime residency that was one of the most lucrative contracts of all time ($100 million…no big deal).

It’s safe to say Lemercier is a Dion superfan; she spent “a year and 19 days” reading every book and consuming all the information she could about Dion in order to write, direct in and star in the role. But she also took her devotion to the role a step further.

Despite the film being told from when Dion was a baby, it was important for Lemercier to star as her in every scene – even when she’s a small child. The film used special effects to shrink Lemercier’s body and erase years off her face, so she could play Dion from five months of age well into her ‘50s. The effect puts many of the film’s sequences squarely into the nearly unwatchable area of the uncanny valley, and did in fact inspire a Google search of whether or not Dion had a birth defect. (She did not.)

But it speaks to how desperately Lemercier wanted to embody the diva. Despite all Dion’s attempts to be private – she didn’t want anything to do with the making of the film, and her family has since said they hate it – there’s something about the singer that makes people’s hearts latch tightly to her.

Lemercier spoke with NYLON about what’s so captivating about Dion’s life, the singer’s darkness, and the…creative liberties…she took with the film.

Aline is now playing in theaters.

Why did you want to make this film? What was so captivating to you about Celine and her life?

I was a fan of Celine’s songs, but when I saw [the 2010 concert documentary Celine: Through the Eyes of the World], I was touched by the first steps of Celine walking around as a child. I don’t know why I was so touched, but I said, ‘I will do a movie.’ I spent one year and 19 days to read everything, to watch everything, and to discover that there’s the family story and a love story. There were some songs I didn't know, not only songs made for Celine, but songs that she was singing at 17. It was a big joy to discover that and a big joy to shoot it and a big joy to edit it. It was, for me, the most important in terms of movies I've made.

Why do you think that is? Just because you are so interested in her story?

What is the most striking or interesting thing about Celine or her career?

I think it’s the love story, it’s amazing. If I watched old movies I made 20 years ago, I don’t care about the movie, I care if I am happy, if I was in love, if I was sad. It’s very rare for a star like this to have only one unique love and somebody who never touched a cigarette and never drank because when you are making biopics, it’s often about the dark side of somebody and this depressed thing, and it was not the case with Celine, and I liked that.

I guess that is unique that she never struggled with addiction or anything like that. So you don’t think she has a dark side?

Of course she had it, but she hid it.

What was that dark side?

I don’t know, but she’s very protective and I understand it very much. Maybe that’s why she never wanted to see the movie. I think for her it’s difficult to look back, because she lost a lot of her people. She wants to stay positive. I think for me, I’m more dark than Celine. She’s full of courage.

She only ever wanted to sing and she was amazing, so she grew up in the spotlight.

I wanted to ask about your choice to play the young Celine. How did that come about?

I’m a standup comedian and the first character I wrote was a little girl and it’s something I like to do, but I wanted to tell you it’s not my old face on the baby body; I've done everything with my entire body. It's my hands, it’s my body; they reduced me and took out the wrinkles and everything. I began the shooting at six months old in a drawer with my baby face, it was very funny. I wanted to play that part of the life; she was a strange little girl, but she didn’t care because she was so loved by the family.

Was Celine involved at all in the making of the film? Did you reach out to her?

I’ve never spoken to Celine. I wrote to the manager and she asked if she wanted to read it and she doesn’t want to read it or see the actors I've chosen to play the parts, and I understand that very much. I hope one time before my death she will see it. It’s a tribute to her to her career and to her love story and I would like it if she saw that.

Are there any other interesting details about her life that didn’t make it in the film?

A lot. It was incredible for me to hear that she spent time in Ceasar’s Palace, limousine, home without going into town, because she’s famous. If I'm traveling, I have to wake up very early to see the town. That’s why I made the sequence at the end when she takes a walk in the street in the morning, because she could never do that. She couldn’t walk in the street; she’s too famous and sometimes it’s a jail being so famous. I wanted to see the character in the street walking and see the loneliness of the figure, of the woman. I’m also speaking about the artist's life, which is also my life, because I’m on stage 35 years and even if my audience is smaller, I know what it is to be alone. At the end, you hear applause and then you are in front of your soup alone. It’s also a story about the special relationship you have with your crew, the guy who does her makeup in the movie, Fred, she spends more time with Fred than her family because you are playing every night and they are close to you and to the artist.