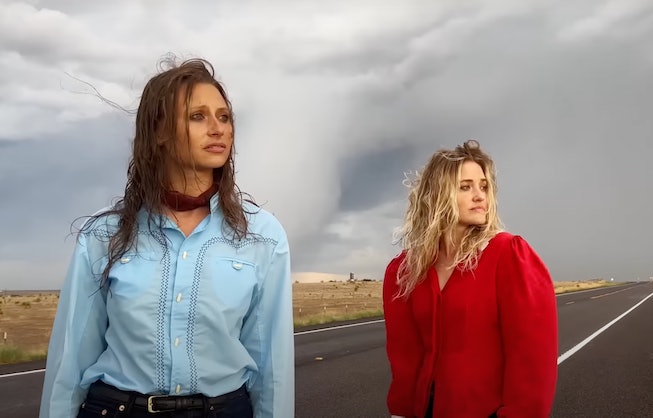 While people are losing their minds to “Potential Breakup Song” at the club, Aly & AJ are laying low. Or at least, that’s according to the lyrics of their latest single “With Love From.” The song, a melancholic Americana folk ballad about letting go and growing up, is a hairpin turn away from the ultra-pop songs that made them famous, and represents a new chapter for the duo.

The video for “With Love From,” the title track of their forthcoming album, was released this week. Directed by Stephen Ringer, who is married to Aly Mishalka and known for the 2015 indie film Weepah Way for Now, the music video is a melancholic scrapbook, told through grainy film and long shots of close-ups.

Shot in a quiet moment between two tours, like the song title suggests, the video has a postcard-like quality, with shots of Aly and AJ performing onstage, plucking dandelions, meandering around Las Vegas and Marfa, Texas, headbanging in a garage, and dancing with glasses of whiskey. There’s no plot, just emotional brushstrokes, not unlike a dream.

“I’m hiding out in Missouri/ Not happy anywhere/ I had it all in front of me I didn’t even care,” AJ sings over mellow guitars before swelling into the chorus: “I told you that I’d change/ But I guess I never did,” with the slightest shimmer of a guitar.

“We wanted to make a record that kind of dug deeper into Americana folk music, and we’re not claiming that this record is among the American greats, but we did our best in telling our story and staying true to who we are as songwriters and musicians,” Aly Michalka told Variety.

“Pop is still in our DNA — that’s songwriting at its essential core. Every song, in a way, is pop. With a lot of ways songs are formatted, they’re usually in a pop format,” AJ said. “But I think for Aly and I, bringing in a little more of a rock edge, a little more guitar, a little more analog-leaning production as opposed to electronic-leaning synths.”

Aly & AJ also released tour dates this week for their “With Love From” tour, which kicks off in March and picks back up again in September, across 18 cities.

Watch the music video for Aly & AJ’s “With Love From,” below.