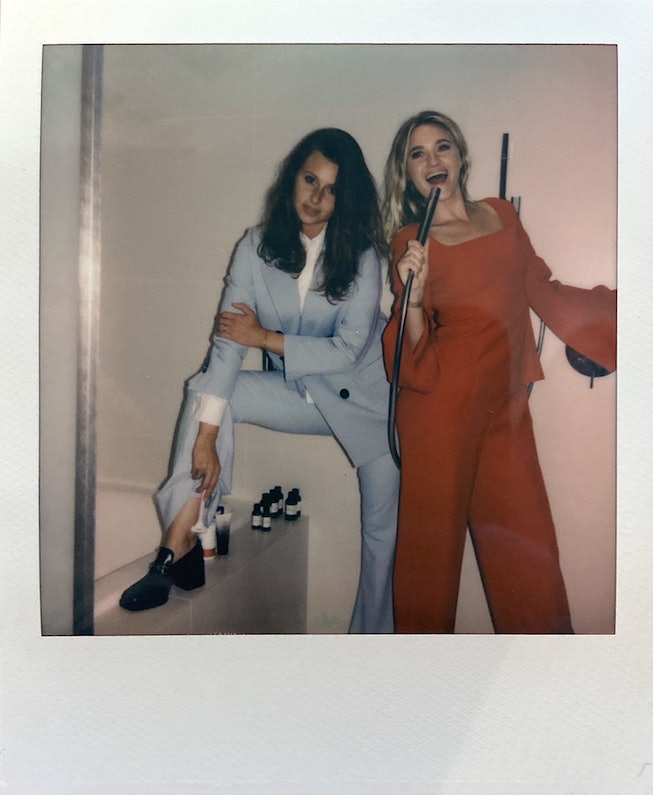 Aly and AJ Michalka are getting ready for the next stop of their event-filled week in New York — the invite-only Saks Fifth Avenue soirée hosted in part by Sarah Paulson. The swanky event was held at the department store’s upstairs venue, L’Avenue, where guests were greeted by a sparkling champagne tower and fashion week mainstays like Amanda Lepore mingling among the stylish crowd. In their room at the Times Square Edition Hotel — directly overlooking the bright billboards of the iconic neighborhood — the sisters are trying out their looks for the night and recapping the shows they’ve already been to and loved, including Peter Do, Monse, and Collina Strada.

You wouldn’t necessarily know it, but it’s Aly & AJ’s first-ever New York Fashion Week. The pop sister-singer duo have been familiar faces in the entertainment industry since their album Into The Rush was released in 2005, reaching certified Gold status, but the last few years have opened them up to a whole new fanbase.

As Aly, 32, and AJ, 30, are putting the finishing touches on their outfits, they get a text that they’ve won the VMA for Best Comeback Song. Their 2007 hit, “Potential Breakup Song,” found a new life last year when the sisters updated the lyrics for the ever-online generation, and it became an even bigger hit on TikTok, which has become an unlikely place of nostalgic discovery.

Reflecting on the revival of the hit, AJ tells NYLON, “It's really cool. I mean, you hear about people connecting to your past in a way that is so exciting, because they actually care about the present, too. They're here to listen to the new stuff. But they also really recognize that nostalgia is such an important thing, and something we've all been craving this past year, I think. And then we find out that we have fans in places randomly that we didn't even know existed. Like the fashion space, designers that have known our music for years that have just been meeting us for the first time. You start connecting with people that are like, ‘You were my childhood.’ And it means a lot to us.”

The sisters released their fourth studio album and first since the 2007’s Insomniatic, A Touch Of The Beat Gets You Up On Your Feet Gets You Out And Then Into The Sun, in May 2020, and have been enjoying the hordes of new fans discovering their current and older music.

“It doesn't ever get old, it's wonderful,” AJ adds. “And it's cool to know that we're a part of people's past, and that we're a bit of a time capsule.”

For now, they’re looking forward to seeing their final NYFW show — Batsheva. “We have Batsheva in our closet,” AJ says. “I find her clothes to be really kind of whimsical and childlike. And we're in these very kind of spring colors. We're both spring babies, and I was like, ‘This reminds me of March and April colors.’”

“I ended up wearing a lot of her dresses to holiday parties,” Aly adds. “So I make it a thing where I now buy a dress for Thanksgiving and dress for Christmas that's from her.”

As they prepare to make their way into the breezy September night, Aly & AJ consider what’s next. They’re releasing a brand new song, “Get Over Here,” off the deluxe version of their latest album, and they have a 55-city tour starting in February — and plan to record an album beforehand.

“We're hoping to make the record before we go on tour,” Aly says. “So it's going to be a lot. We would make it during winter.”

“We've got a lot of shit on our plate to do,” AJ adds, before Aly concludes, “We have some really good songs, but damn, we've got to move it.”

NEXT UP
Entertainment
Getting Ready With Pale Waves For Their 2022 New York City Concert
Entertainment
Paramore Un-Retires "Misery Business" On Tour
Entertainment
YDE On Her EP, Lady Gaga & Making New Short Film 'Send Help’
Entertainment
Who Will Rihanna Bring To The Super Bowl?