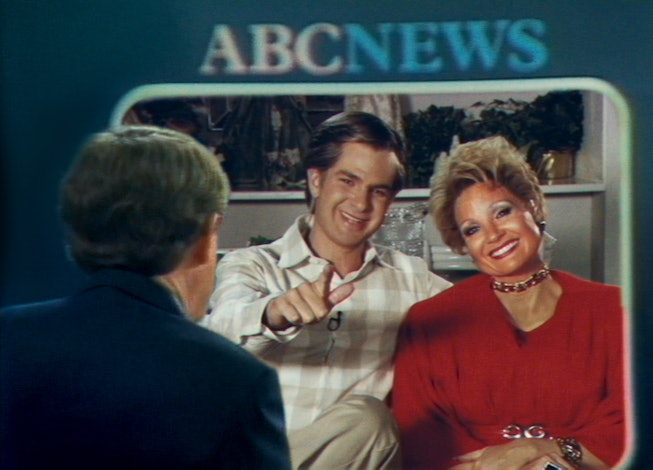 What must Andrew Garfield think of American culture? After his breakout as Eduardo Saverin in The Social Network — the banner film of the scammer generation — the British star navigated the corporate complexities of playing Spider-Man on the silver screen, and now, he’s taken on the role of another poor wretch in our capitalist terror arena. In playing the ill-fated, greed-fueled televangelist Jim Bakker in The Eyes of Tammy Faye, Garfield once again must explore the grand promises, and ludicrous cons, of the American Dream.

The Eyes of Tammy Faye evokes the wild rise and fall of the Bakkers, Christian TV’s first couple: Tammy Faye (Jessica Chastain), the open-hearted and unstoppably camp lamb of God; and her husband Jim (Garfield), an eager preacher who believed that dollar signs came with a divine blessing. Though Tammy Faye would endure as an unlikely gay icon, Jim Bakker would prove to be a tragic fool for a false God, one who promised fame and money at the cost of personal integrity. In director Michael Showalter’s retelling of faith’s fallen family, Jim and Tammy Faye portend the implosion of church and state, and rise of reality TV as our new God.

NYLON spoke with Garfield about playing a delusional character, retaining self-awareness despite global fame, and his own journey through spirituality.

Incidentally, this film is based on a 2000 documentary of the same name, made by the producers of RuPaul’s Drag Race, and narrated by RuPaul. Were you surprised when you discovered the movie’s origin?

It makes sense when you start to get to know who Tammy Faye was, and the impact she had on the LGBTQ+ community. There’s a beautiful framing and containment by those producers, whom I love, and by Ru, who, of course, we all love. I found it to be the perfect kind of combination and compliment to Tammy Faye, and I’m sure that wherever she is, she’s smiling down and going: That’s my crew, that’s my gang.

Tammy Faye is a gay icon, and she’s very sympathetic. But your character, though he’s not fully a villain, ends up doing a lot of damage. How do you wrap your head around a role like this, and affirm a character who is so morally warped?

When Jessica and the powers that be asked me to come onboard, I said: I have no interest in portraying Jim Bakker as a villain. If you want that, hire someone else. They said: We don’t want that. So my intention was always to play the human, and be the human. And as you say, there was confusion and misguidedness, and an overwhelm. The thing I connected with most with Jim, that leads to the choices he makes, and to missing the mark, is this feeling that I think we can all identify with in our culture right now: a lostness, a never-enough-ness, a desperate need for eternal validation.

The mistake that Jim made is that he equated God’s love with financial validation, attention, and viewing figures. When he’s talking about people pledging money, he’s really talking about: God is happy that we are doing this, God is very proud, my father in heaven is proud of me. There’s nothing nefarious about it; there’s just a few synapses that haven’t been connected which create that perception. Because we’re all living in our own matrix, right? And this is just a matrix that Jim has been living in.

He misinterpreted the word prosperity — he simply got the word wrong. When he read the bible, he read prosperity through a very modern lens. And he was also reading The Power of Positive Thinking, by Norman Vincent Peale, and he suddenly went: Oh, right! God’s love is financial riches. God’s love is prosperity in family and friendship, and building! I’m going to build for him! In jail, he realized that he just misread the word. In jail, he started reading the original translation from the Greek of the bible, and he was like: Oh, prosperity just meant spiritual prosperity, which is actually more about financial poverty and living as Jesus did, with the prostitutes and the outcasts of society, renouncing all material possessions. So he just got it wrong.

There’s a chilling lack of self-awareness to the character. It made me think of how, through social media, or through any form of public life, none of us is self-aware. You live in a world of hyper-exposure, through your work. How do you retain a feeling of accountability or self-awareness and not lose yourself the way that he did?

It can go two ways. That’s one of the reasons I don’t use social media. I feel exposed enough to the world already, in terms of being a storyteller and being on the screen. That’s plenty. I’m going to talk to you about the thing that I made, and that’s enough for me, for the time being. They were the first reality TV show family, Jim and Tammy. They pioneered it. There’s that moment in the film where Tammy announces her pregnancy on air to surprise Jim, in the Jim & Tammy Show. It’s the first time anything like that has ever been done. And Jim obviously had no idea it was going to happen. His response to this very pure, beautiful, intimate, sacred thing is kind of confusion. He can’t have that pure response because he’s on camera, there’s a bunch of kids watching, and a crew. He’s in a different mode. So you see him struggling with: Is this OK? Are you lying? What are you doing? Is this true? How do I respond? And it suddenly becomes performative without intentionality. Because Tammy was just that way. She had a big hunger for attention, evidently, because that’s how she experienced love.

So, suddenly Jim’s in that...it’s just a wild moment, and then suddenly it works and pledges start coming in. And he’s like: I guess God loves this? God loves that we’re sharing these intimate, very sacred, private moments...why shouldn’t we share them? This is our extended family. We’re all one family! And then suddenly you’re in a whole different matrix. You’re in a different perception of how to proceed in life. And then everything is geared towards pledges, getting money in; whatever gets money in is God’s love, so we better do it.

You’ve been in quite a few projects which reckon with God: Silence, Angels in America on Broadway, the upcoming Brideshead Revisited and Under the Banner of Heaven adaptations, and there’s The Eyes of Tammy Faye. What do you take away from exploring faith in so many different ways?

If I didn’t go to school for acting, or theater — or as my Nana would say, if I didn’t go to Clown College — I would have ended up doing some kind of theological study, probably. It’s the mystery of a spiritual life. I’m very drawn to it. It’s fascinating that there’s so much overlap. I just love debunking the idea of the one true religion — there is no such thing. Ultimately, my spirituality is the church of theater, and oftentimes film. But I feel it even more in the theater in a way. Storytelling reminds us that there really is only one true church, call it what you will: the cosmic consciousness, the universal collective unconscious. We are all one thing interacting with itself, we are all at a very vital thread at this grand tapestry of all life, and time is actually just a construct. Everything is happening all at once, and everything is perfect all the time. For me, that’s what storytelling does. It reaches across divides, and reminds us that you are the other me and I am the other you. That’s what I’m pursuing, I think, is that remembrance.