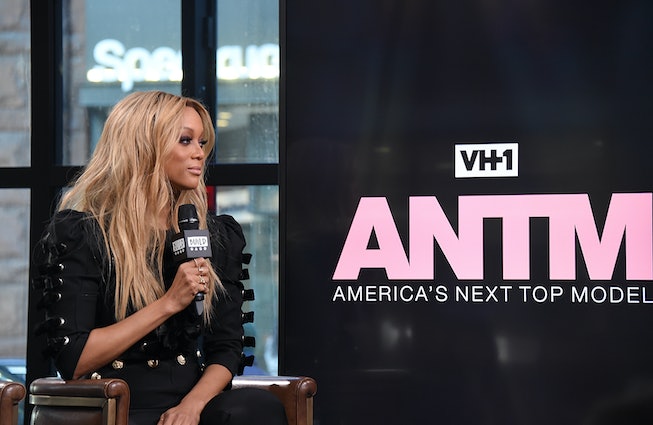 America’s Next Top Model was one of the most addicting early reality TV shows — from meltdowns during makeovers to absurd, high-concept photoshoots, Tyra banked herself a lifetime of memeable, memorable content.

But the show wasn’t always so great for the contestants. Now that NDAs for the show are expiring, contestants like Sarah Hartshorne — who likened the experience of being on the show to “being at a traumatic sleepaway camp” — and Lisa D’Amato, have taken to platforms like TikTok to reveal the show’s questionable practices, which included being paid only $40/day.

Now, Angelea Preston — who won Cycle 17 of the show but was later stripped of her title — is revealing more details about the extent of the show’s murky ethics. In a recent interview with Bustle, Preston shared what really went down after she won the competition.

Preston, who had previously competed on Cycle 12 and 14, was ecstatic when she finally won Cycle 17, nabbing a prize package that included a Vogue Italia spread, a fashion campaign for Express, a guest correspondent gig on Extra, and most crucially, a $100,000 CoverGirl contract — a trophy so iconic I can still hear Tyra’s voice as she says it.

Only Preston’s win didn’t air. Instead, Tyra said she’d been disqualified due to “unusual circumstances,” which Preston is now revealing was because the show found out she had temporarily worked as an escort. (Which, first of all, who cares?)

In her interview with Bustle, Preston explains how she was living in New York City struggling to make it as a model after she was initially on the show. Casting directors were particularly turned off by her time on the show. “I would bring my portfolio to an agency, which had all my Top Model photos in them,” she recalls. “That’s all I had. I remember going to an agent in New York, and he asked, ‘This is a Top Model portfolio, isn’t it?’ After I said yes, he scoffed and closed my book.”

It was during this time that Preston was manipulated by a pimp into becoming a sex worker, a situation she was unable to leave because he was physically abusive. Preston’s friend contacted multiple people at ANTM to see if they could help Preston out of her abusive situation, but nobody did anything.

When Preston went into casting for Season 17, they asked her about her time as an escort — revealing they had known about her abusive situation and hadn’t done anything to intervene. They presumably didn’t have a problem with it, because they cast her anyway. But after her win, she was called into a meeting with Top Model figureheads, who informed her that her win would be revoked. She was told by the show’s attorney: “You know, Angela, you have no one to blame but yourself. You did this to yourself.”

“It was already traumatic going through the sex-work stuff, and now to add insult to injury, they were punishing me for the rest of my life,” she says in the interview. “I was gutted.”

Preston ended up filing a lawsuit against the show, but ultimately dropped it in 2018. Instead, she received a bachelor’s degree in journalism, now works as a radio host at an NPR affiliate, and is currently working on a memoir — which means we’ll soon know even more about the dark underbelly of the once-iconic show.