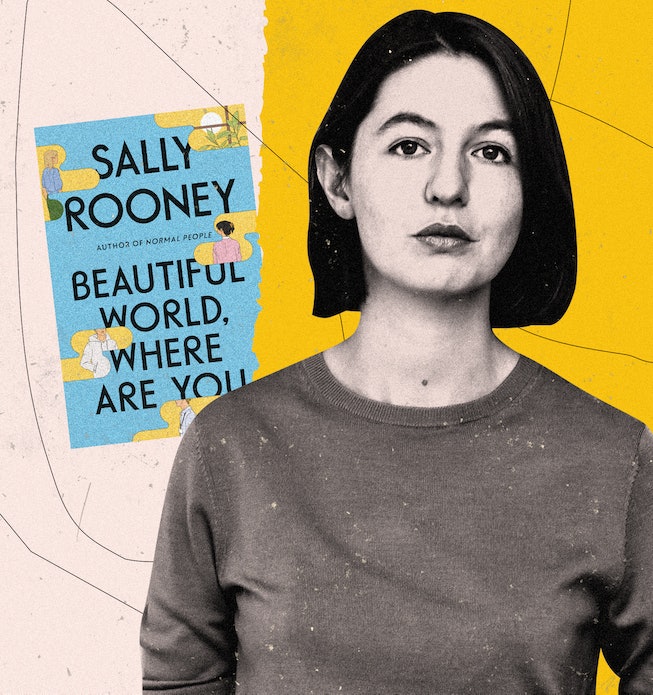 On “Getting Older,” the opener off her latest album Happier Than Ever, Billie Eilish sings, “Things I once enjoyed/ just keep me employed now.” For a 19-year-old pop star to be singing so warily of burnout is a sad commentary on what we ask of artists: to bare their souls and then to keep doing it again and again and again. Sally Rooney wrote two books that sold a gajillion copies, inspired a thirst-trap Hulu adaptation, and gave us enough Twitter discourse to permanently mute the phrase “millennial novel.” In her third novel, Beautiful World, Where Are You, a meandering, unexpectedly buoyant story about the commodification of art, slippery relationships, and the end of the world, we get the sense that she didn’t exactly like all that attention.

Like Conversations With Friends and Normal People, Beautiful World, Where Are You is about friends in their late 20s and the emotional and romantic entanglements, class struggles, and loosely dominant-submissive power plays between them. Rooney’s characters seem to always have everything, but want nothing, question morality, and judge spirituality without having any beliefs that anchor them, and are vaguely miserable. They are, after all, millennials, and much ink has been spilled to revere her as the voice of a generation.

The novel is told, alternatively, through long, meandering first-person emails between two friends, Alice and Eileen, and corresponding chapters in the third person, where we see the plot of their lives unfold. Alice and Eileen are both writers, which is why we suspend our disbelief that any email to a friend would include a sentence like: “I think I have by now forgotten how to conduct social intercourse.”

Alice is a wildly successful novelist who moved to a cottage on the coast of Ireland to work on her third book, after having a mental breakdown that institutionalized her. Eileen works as an editor at a poetry literary mag and lives in Dublin. Alice meets Felix, who works at a warehouse that sounds a lot like Amazon, on Tinder, while Eileen starts sleeping with Simon, her neighbor growing up turned lifelong friend and sometimes lover. Eventually, the narratives converge and the four are together for a weekend at Alice’s country house, but not before each pair flounders in the ambiguity of sexual power plays and modern relationships, the undefinable nature of which Rooney accurately captures when Alice writes to Eileen: “But what would it be like to form a relationship with no preordained shape of any kind? Just to pour the water out and let it fall. I suppose it would take no shape, and run off in all directions. That’s a little like myself and Felix, I think.”

“This novel is not a ‘will they, won’t they;’ it gets at something more slippery than that, and the emails read like doing long, lazy backstrokes through a pool, going around and around, pleasantly tiring yourself out.”

Rooney has been often touted for her ability to write bracing, vulnerable sex scenes, and Beautiful World, Where Are You is no exception. But the sexual relationships between Alice and Felix and Eileen and Simon feel like more of a Trojan horse for Rooney to get to the core of the book, which is not largely plot-driven, but more about the relationship between Alice and Eileen and the long emails in which they zigzag around ideas of morality, the problems with contemporary art, and the collapse of past and current civilization. This novel is not a “will they, won’t they;” it gets at something more slippery than that, and the emails read like doing long, lazy backstrokes through a pool, going around and around, pleasantly tiring yourself out.

In the emails, Rooney writes about ethical and moral questions about the commodification of art in a way that’s not unlike Eilish. In an email to Eileen, Alice writes: “... I don’t want to live this kind of life. When I submitted the first book, I just wanted to make enough money to finish the next one … Whatever I can do, whatever insignificant talent I might have, people just expect me to sell it — I mean literally, sell it for money, until I have a lot of money and no talent left.”

In an interview with Vogue, Rooney acknowledges the way this book is part excavation of what she’s gone through the last few years: “There’s a level at which I’m using the book in some way to explore emotions that I may not even be aware that I’m going through,” Rooney said, later alluding to “a kind of psychological toll” her success has taken. But it’s not just the privilege to be able to create it at all — amidst a burning world — that Rooney is grappling with: “To confront the poverty and misery in which millions of people are forced to live, to put the fact of that poverty, that misery, side by side with the lives of the ‘main characters’ of a novel, would be deemed either tasteless or simply artistically unsuccessful … My own work is, it goes without saying, the worst culprit in this regard.”

The novel’s structure ultimately keeps the characters at arm’s length for the reader. We see either distant third-person narration or a first-person narration made unreliable because it’s filtered through email: We’re only getting as much as Alice wants to share with Eileen and vice-versa. It’s as if Rooney is holding something sacred for herself, like she’s reminding us, I don’t have to tell you everything. Even the way the text takes up space on the page, in large paragraphs, often creates a wall of text, echoes the ruminating pattern of a spiraling, inner monologue — because who has time for paragraphs when the world is burning?

For all the ambiguity and low-grade malaise its characters experience, Beautiful World, Where Are You is Rooney’s most buoyant and best work, though it probably won’t be her most popular. She captures the slippery in-betweens of being in your late 20s, of living in a world that you don’t know for how much longer will exist, but where you nonetheless still spiral about your crush, stress about your job, and worry about being a good person, whatever that means. When Alice writes: “And I love that about humanity, and in fact it’s the very reason I root for us to survive — because we are so stupid about each other.” Rooney gives her characters, herself, and the reader permission to feel the full range of the often-embarrassing emotions that come with loving and liking other people, despite impending doom, knowing that chaos and hope and stupidity all exist, messily, together.

Beautiful World, Where Are You is out now.