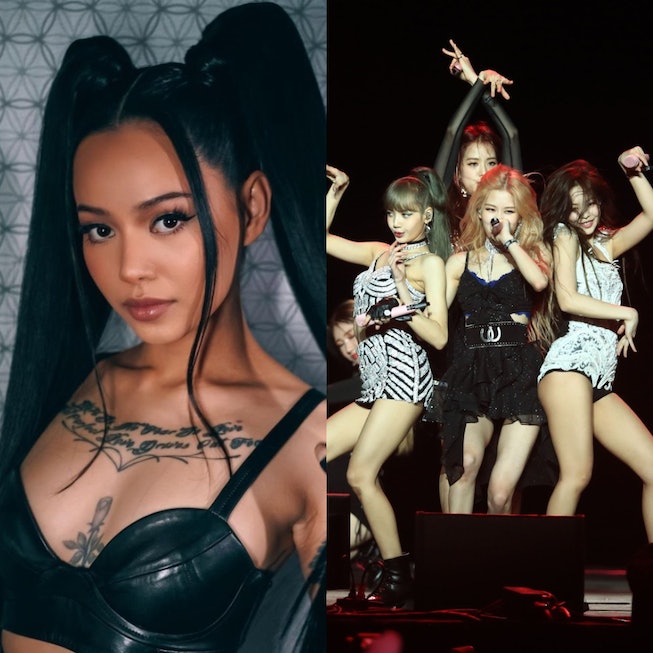 TikTok star Bella Poarch, whose video of her lip-syncing to Millie B’s “M to the B” has a whopping 50.7 million views, met with K-pop superstar group BLACKPINK members Jennie and Rosé, sending fans hopeful for a collaboration into a tailspin on Twitter.

Like so many before her, Poarch has leveraged TikTok fame into a music career, releasing her single “Build A B*tch” earlier this year. Fans shared several Just Jared-quality images of Poarch and BLACKPINK members meeting in Los Angeles. They’re seen getting into a car and entering a building together, though it’s not clear what the building is.

It’s also unclear what they were meeting about, but Poarch recently expressed her love for BLACKPINK in an interview with Elle. “My dream collaboration is ROSÉ and I love K-Pop and I love BLACKPINK. I'm obsessed,” she said.

The meeting comes after another fan freakout last week, when Olivia Rodrigo was spotted eating dinner in Los Angeles with Rosé of BLACKPINK. They were also seen with director Petra Collins and stylist Devon Carlson, causing fans to speculate on a possible collaboration — one that is surely designed to break the internet.

And if that’s not enough to satiate stoked K-Pop fans, Dua Lipa also hung out with BLACKPINK’s Jennie in Los Angeles earlier this month, posting a mirror pic to her Instagram of the two. Lipa and BLACKPINK had previously collaborated on the song “Kiss And Make Up” in 2018. It’s unclear what, if any, collaborations are in the works, or if celebrities are just being as social as the rest of us in this vaccinated summer. So much speculation, so little time!

NEXT UP
Culture
Spotify Wrapped Is The Only Social Media That Doesn’t Lie
Culture
“Goblin Mode” Is The Word Of The Year
The Art Issue 2022
True Life: My Partner Is Obsessed With NFTs
Culture
An Exhaustive Breakdown Of The Balenciaga Controversy