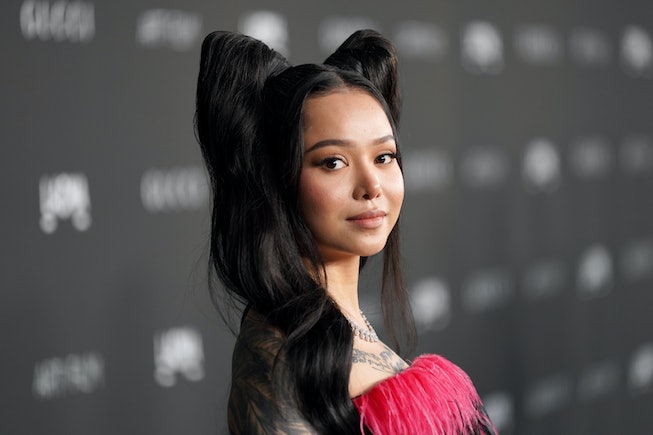 You know what they say: The friends that NFT together, stay together. Last fall, TikTok tried and failed to release a collection of NFTs with pop stars, including Bella Poarch, Grimes, and Lil Nas X, but ultimately scrapped the project. Still, an enduring friendship was forged between Grimes and Bella Poarch — one that might amount to them releasing a song together.

Poarch, who just so happens to be the third most followed person on TikTok with 88 million followers, already has begun her pivot from TikTok star to bonafide pop star with the release of her extremely catchy debut single, “Build a B*tch” released in 2021. And now the next logical step to securing a spot on the pop stage is to collaborate with the genre’s most talented — and talked about — artist.

In an interview with Cosmopolitan, Poarch explains that she met Grimes through producer Benny Blanco. “She’s one of my closest friends,” she says. “They were in his studio and I decided to go. We might have a song together.” It’s easy to imagine a Grimes and Poarch song, an impossibly catchy futuristic concoction that would do equally well on TikTok as it would in the metaverse.

Poarch also said that Grimes recommends books to her, including a book called Life 3.0: Being Human in the Age of Artificial Intelligence (makes perfect sense). “I would’ve never thought I would read about AI, but I did,” Poarch said.

Besides creating NFTs, chilling the studio and starting an unofficial book club, Grimes also suggested other very Grimes activities for the pals to do together. “One day she’s just like, you know what, let’s go jousting. Or you know what, we should go take a falconry class,” Poarch said. “And then next thing you know, we’re doing an NFT.” Casual jousting? Now we’ve heard everything.

Poarch also talked about some of her inspirations, who include Doja Cat, whom she has yet to meet, along with Melanie Martinez and Lea Salonga, a Filipino singer best known to people under the age of 30 as the voice of Mulan.

“She was the voice on ‘Reflection,’ a song I grew up with that inspired me to sing,” Poarch said. “The thing about Filipinos is if they find out that you are Filipino, they will support you because you’re representing the country. When I found out that Olivia Rodrigo was Filipino, I was so proud.”